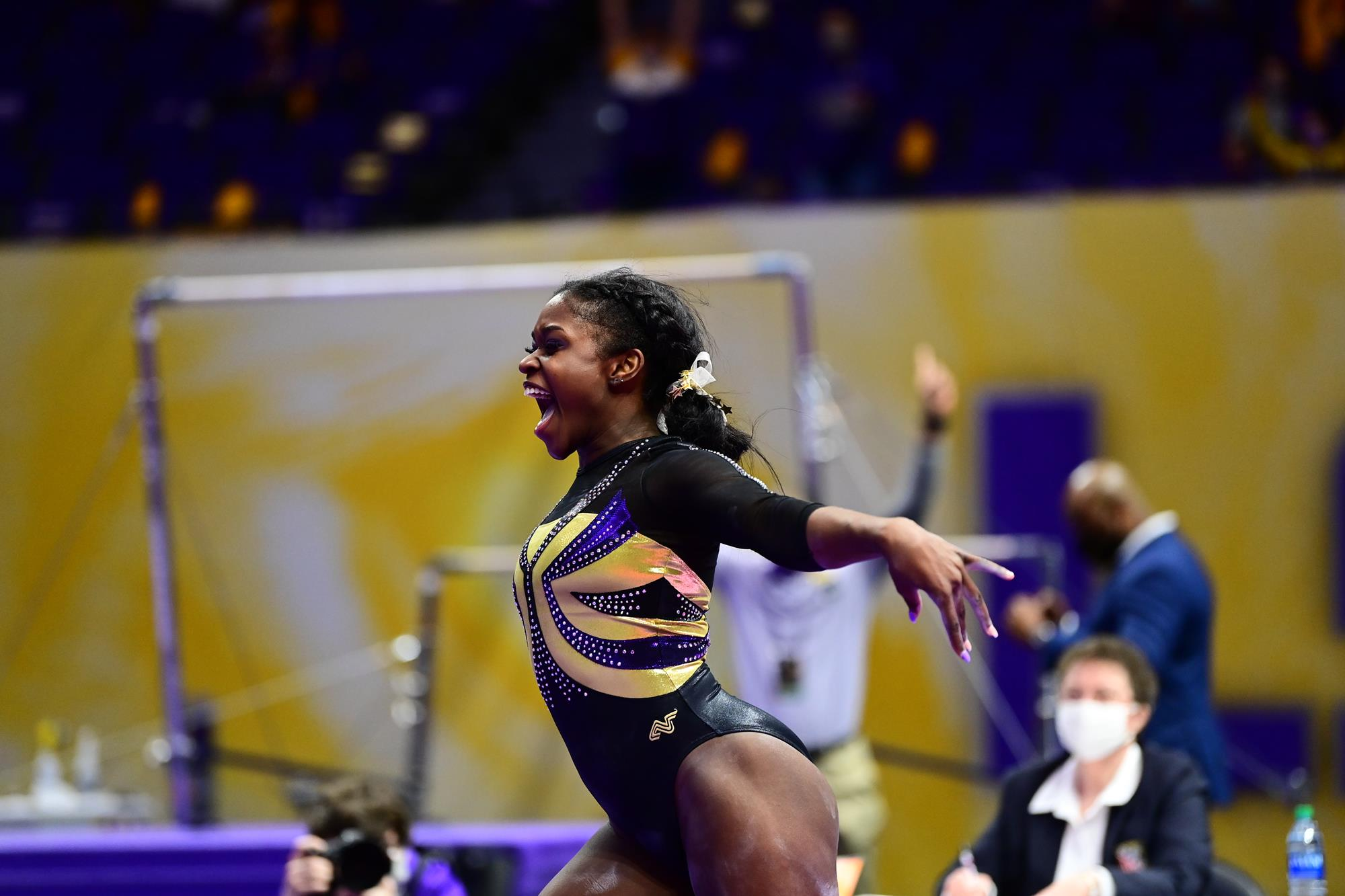 BATON ROUGE – In the final performance of the night, Kiya Johnson scored a perfect score on floor to lift No. 3 LSU Gymnastics to a 196.550-196.350 win over No. 15 Arkansas Friday night inside the Maravich Center.

Johnson’s 10 was the third of her career and first on floor. She joined April Burkholder and Sarah Finnegan as the only gymnasts in school history to earn a 10 on three events. Her 10 marked the first in NCAA Gymnastics in 2021. Johnson’s 10 in the opening week tied Ashleigh Clare-Kearney (1/5/2007) for the earliest by an LSU gymnast in school history.

After the season was canceled 308 days ago, the LSU gymnastics team returned to the Maravich Center and competed in front more than 2,500 fans that lifted the team to victory.

Johnson earned the victory on floor, Haleigh Bryant secured the first win of her career on vault and Sami Durante earned a win in the anchor spot of bars.

“It was really good to get a win to start this season,” LSU Gymnastics head coach Jay Clark said. “It was a solid score to open the year. I think you will see a different team next week. Overall, I am pleased with tonight knowing our potential and we do not have to be perfect on the first night.”

Bryant Opens With Vault Win
LSU scored a 49.175 to open the meet and trailed the Razorbacks after one rotation. Elena Arenas and Chase Brock opened with scores of 9.775. Sarah Edwards made her return for the Tigers after missing most of 2020 and scored a 9.875. Johnson followed with a 9.85 and Bryant anchored the event with a 9.90 to secure her first career victory.

Bars Regains Lead After Bars
The Tigers put up a strong performance of 49.200 with a pair of fresh faces in the bars lineup. Johnson opened the lineup with a 9.825. The three freshmen, Arenas, Brock and Olivia Dunne delivered strong performances and built off of each other with scores of 9.75, 9.85 and 9.875 respectively. Durante anchored the bars lineup for the first time with a 9.90 to earn the win.

Beam Struggles and Falls Behind
Christina Desiderio started the team strong but the Tigers were unbale to provide consistent performances, which ended with a 48.825 on the event. Desiderio opened with a 9.875 and the Tigers used a career high 9.90 from Dean in the fourth spot. LSU also counted scores of 9.775 from Reagan Campbell, 9.700 from Durante and 9.575 from Arenas.

Floor Lifts Tigers to Win
The seniors Edwards and Desiderio steadied the rotation with scores of 9.875 and 9.85 in the second and third spot. Bryant set up Johnson’s perfect score and the Tigers’ win with a 9.975 in the fifth spot of the lineup. Johnson’s 10 gave the Tigers a 49.35 on floor.

Next Up
LSU will travel to Fayetteville to take on Arkansas in a return trip at 7:30 p.m. CT Friday inside Barnhill Arena. The meet will be televised on SEC Network.