Women’s Hoops Loses To Alabama On The Road 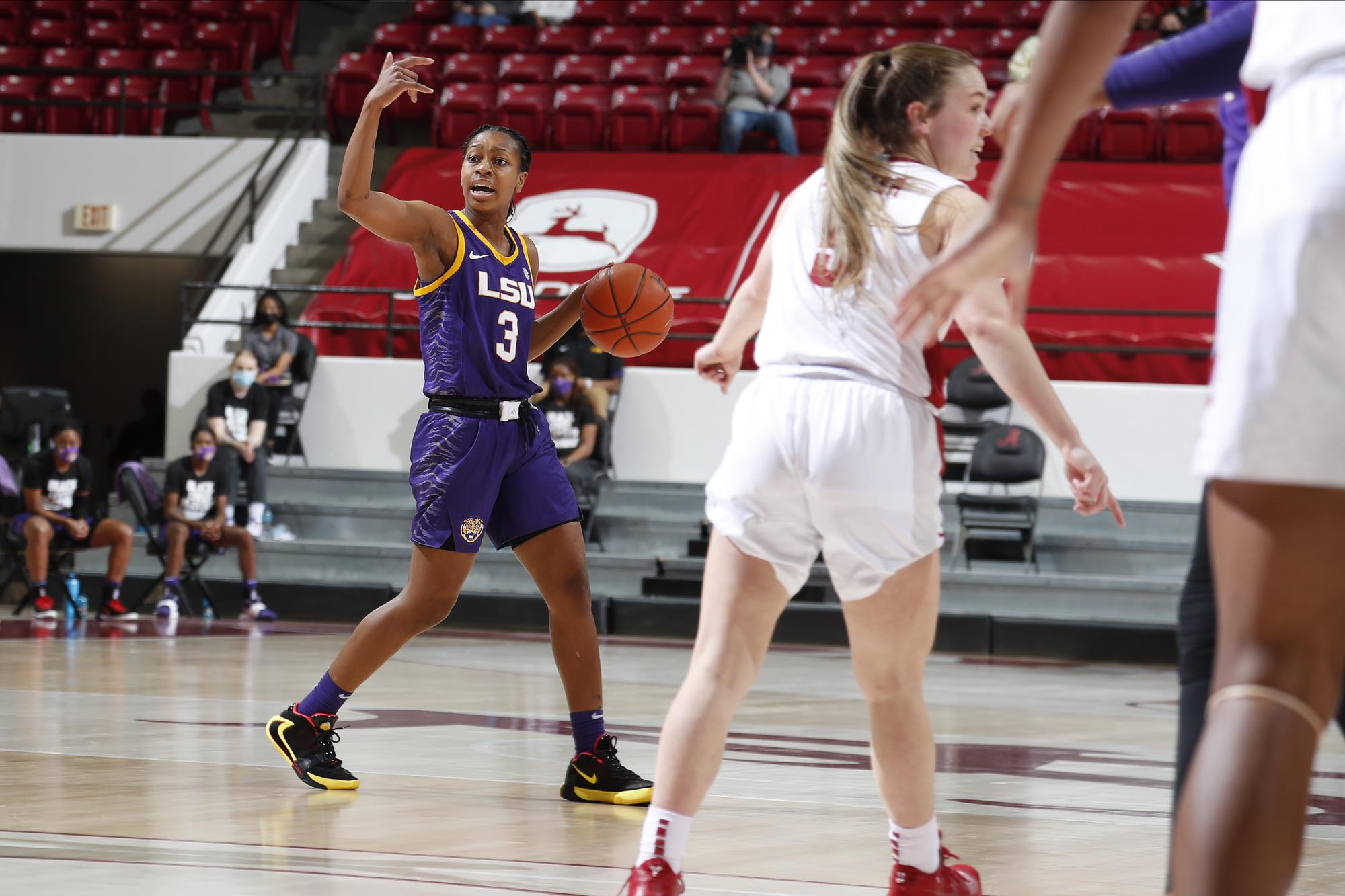 TUSCALOOSA, Ala.— The LSU women’s basketball team remained on the road Thursday wrapping up a two-game trip with a 67-59 loss to the Alabama Crimson Tide.

Senior Khayla Pointer continued to show her natural scoring ability, exceeding her season-high in points, with 25. She filled the rest of her stats line with three rebounds and five assists. Redshirt-senior Faustine Aifuwa collected another double-double, the 14th of her career and her fifth of the season. She finished strong with 14 points, 10 rebounds, and an assist. Sophomore Tiara Young’s effective performances carried over in this ballgame, amassing 12 points, six rebounds, and an assist.

“That’s the testimony of a very good basketball team. We can’t keep digging ourselves and playing from behind, that’s what we’re doing. Our inability to take scouting reports for defense and apply it. Like I told the team, they’ve got really good players and when you allow players to go to their go-to moves, or you allow players to get to their strong hand, then you’re at their mercy. I felt like we did not do a good enough job in setting the tone at the very beginning. We just had to play from behind. This team has a lot of fight in them. They’re going to keep fighting and playing hard, but when you’re on the road and you’re playing in this league, you’ve got to be locked into personnel and you have to be locked into players’ stat lines. We got 11 more field goal attempts than Alabama and were not able to convert on those.”

“What we’re seeing is our inability to score, so when you look at missing over 20 shots in the first half, they’re going to probably get half of those. We’re getting more field goal attempts, and we’re not scoring it. When we’re looking at that stat, every time we’re plus 10, plus 11 in field goal attempts and we’re not scoring at a high enough percentage, then our opponent is out-rebounding us a minimum of plus 10. Our offensive execution, our inability to rebound the basketball from multiple positions offensively and giving ourselves more offensive rebounds. If we’re going to miss 35 shots, we can’t just come up with seven rebounds on the offensive end. That’s where our execution has got to be better. The other area that I think is of concern too is that we only had nine assists on the night. We took care of the basketball; we’re pretty decent there, but the only player that had two or more assists was Khayla Pointer with five. When you have 62 field goal attempts, that assist column goes down because we’re not making shots, so it’s just a trickle-down effect. I think this team has shown they can score the basketball. We had a strong second-half. We got to put it together, though, for 40 minutes.”

The Tigers will return to the Pete Maravich Assembly Center after a two-game stint on the road to face the Tennessee Lady Vols Sunday, Jan. 7. The matchup will be streamed on SEC Network Plus at 1 p.m. CT. As always, you can listen to the Voice of the Tigers, Patrick Wright, broadcasting on 107.3 FM in Baton Rouge.