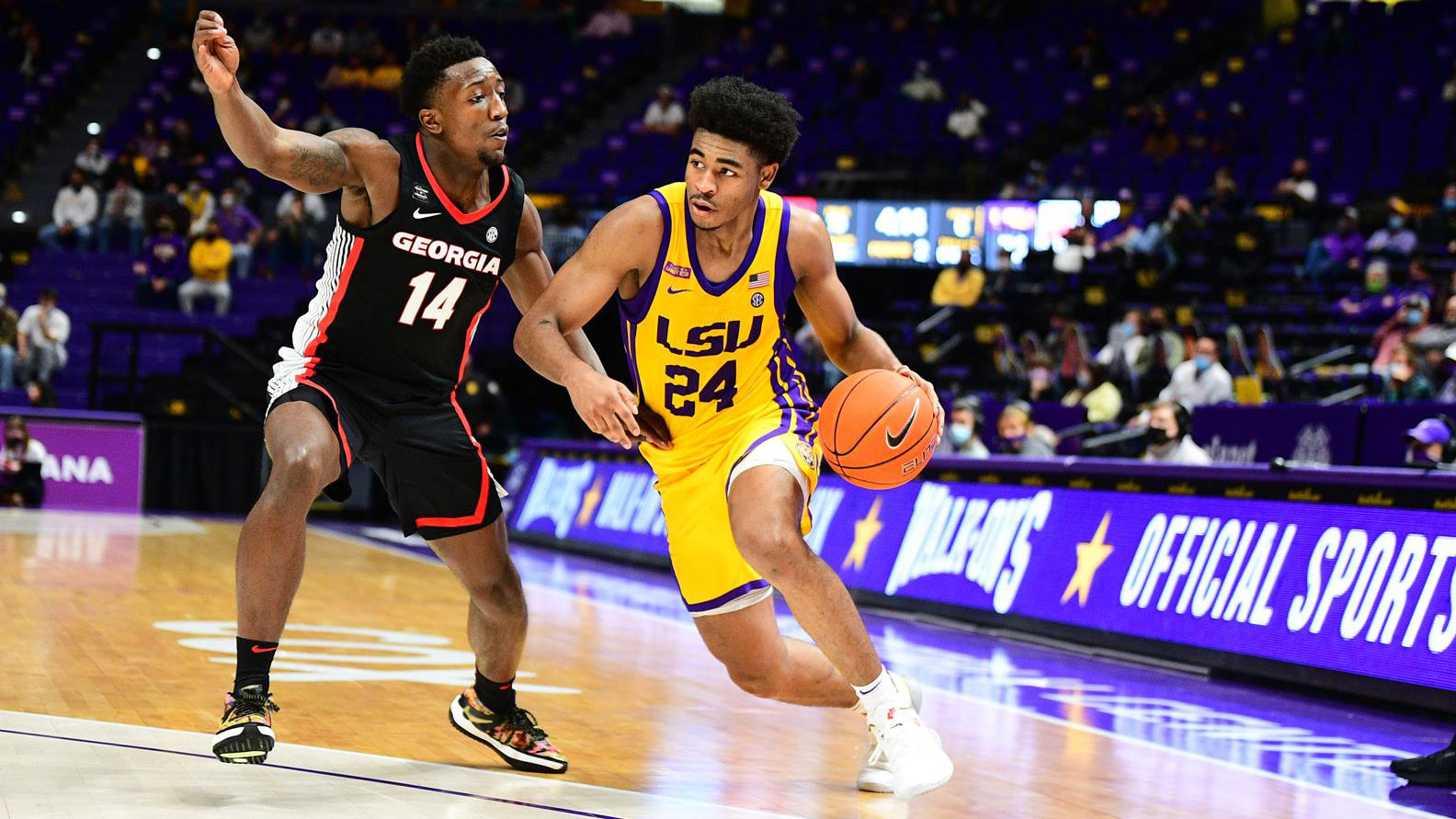 BATON ROUGE – The LSU Tigers rallied from 10 down with nine minutes to play to force overtime and then pushed through in the extra session to score a 94-92 win over Georgia Wednesday night at the Pete Maravich Assembly Center.

The Tigers are now 7-2 on the season and 2-1 in the Southeastern Conference while the Bulldogs dropped to 7-2 overall and 0-2 in the league.

LSU travels to Columbia, Missouri for a Saturday night 7:30 p.m. game against Missouri that will be broadcast on the LSU Sports Radio Network and televised on the SEC Network.

Cameron Thomas led LSU with 26 points even though he did not have one of his best shooting games. Thomas did make 15-of-16 free throws, with the 15 in a row giving him 42 consecutive makes. That set an LSU school record of 42 consecutive free throws made, topping the mark of 35 straight made by Mahmoud Abdul-Rauf during the 1989-90 season. It is tied for the seventh longest consecutive free throw single season streak in the SEC.

Javonte Smart had 21 points, hitting five treys with four assists and six steals, while Trendon Watford had 17 points and seven rebounds. Darius Days had his 11th career double double with 13 points and 11 rebounds.

After an even first half, Georgia was able to take advantage of some LSU miscues and transition buckets to get a 68-58 lead with 9:07 to play. LSU was forced to take a timeout but was able to get rolling as Thomas got a bucket and a free throw to cut the margin to seven at 68-61. Kier missed a jumper and after a Thomas missed, Days got the offensive rebound and scored to cut the Georgia lead to five, 68-63. Days was fouled and made the free throw to make the deficit four.

The advantage did not last long, but LSU was back in the game. Georgia appeared to have control against with an 80-74 lead with 1:57 to play, but Smart hit a trey with 1:44 to play to cut the game to three, 80-78, in favor of the Bulldogs.

Georgia again turned the ball over and off the Smart steal, he sank another three pointer to tie the game at 80. Both teams failed to get shots in during the final minute, forcing the overtime.

The teams traded points in overtime before LSU took the lead on a Thomas free throws that gave LSU an 87-84 advantage. Two Georgia free throws made it 87-86, LSU but then Thomas found Days for a swishing three-pointer that put LSU up 90-86.

Georgia out rebounded LSU, 43-30 with Georgia committing 22 turnovers to LSU’s 16. LSU had 19 steals the most the Tigers have had since 15 against North Florida in Dec. 2017. It ties for the fourth most steals in LSU Basketball history.

“We were down 10 with nine minutes left. We put ourselves in a tough spot, but we picked up our energy and we picked up our urgency. I thought that helped us out. At the end of the day, every SEC game is hard to win. There is no easy SEC game. You have to dig it out. You have to find a way. That is part of life in this conference. There is no easy way up the mountain. It was a difficult win but at the end of the day we found a way. We made enough plays. We got just enough defensive stops. We made enough winning plays. I thought in Mwani Wilkinson made some tremendous winning plays for us, saves, rebounds, defensive plays. That was huge for us.

“It was critical because we had to get it back within striking distance so we could play it out in the six-minute game. We could play it out down the stretch. We got two-and-ones. We stole the ball in the diamond press. In our activity defensively, we gave up a lot of threes. They made some threes. Our activity defensively was better. The 19 steals and their 22 turnovers really bailed us out.”

“I just feel like we came out kind of slow at first and then we picked it up the last 14 minutes of the game. Then we went into overtime and then we got the win. Nothing was going wrong; we are just trying to get better every day. Build better chemistry as a team. That’s what we did in the end and we came out with the win.”

On the threes that Georgia was hitting …

“Right. We play in something called a scoring area and they were far back beyond the scoring area and they just hit tough shots. Tonight was their night and their threes were falling. Hats off to Georgia. But sometimes there are things that you just can’t do or coach. They are shooting the balls at the logo so some things you can’t coach or teach.”

“We got a lot of shots up, before practice and after practice. We work out a lot, every day. I just try to put the work in so we can have a good game and knock down the big shots when we need them.”

On the team still trying to figure out their dynamic …

“We need games like this. SEC games are hard. We have to find ways to figure things out and keep fighting. We are going to go back into the lab and keep working. I know our defense wasn’t the best, but I promise we are going to get it better. I’m just happy to win.

“I had to get to the free throw line to get back in the game and for us to have a chance to win. It happens. Everybody has a game like that.”

“Yeah, they sent two with me. Which they were doing the whole game, double teaming me off the ball screens, double guard and double screen. I knew Days was going to be open. I just gave it to him, and he made it. it was a good shot for Days.”

On if there was a “moral victory” from the result tonight…

“No, ‘moral victory’ is not a phrase. Now, learning and understanding that we can come out here and compete in our first road game. We can compete, play hard and tough, and get our speed going. We can make big plays, but we can also make mistakes, and we’ve got to overcome those. Any time as a coach, the most important is to see your team compete, but you also want them to understand what they have to take care of, like communication errors on a switch or not blocking out on a free-throw situation, something like that. I’m proud of them, don’t get me wrong. ‘Moral victory’ is not a phrase I’d use, but I am proud of their effort, tenacity, togetherness, and the bench energy in here. There was a pretty flat crowd at times because it was a close game, and not having as many people here, but I thought our guys did a tremendous job creating great energy for us.”

“They made a couple of big threes, one I believe was challenged and one was open. LSU’s Cameron Thomas created enough contact to get to the foul line, which stopped the clock and set it for them. They had more free throws than us tonight, but the bottom line is it was the three pointers. At the end of the day, those aren’t the things that beat you. Just like the last play at the end of the game where we missed the layup, that’s not what beat you. That’s the end result, but it’s more about when we don’t communicate on the switch with Darius Days, and I believe it was either Javonte Smart or Cameron Thomas, whoever it was at the end, but we didn’t communicate the switch and Days got an open three. That’s where you have to make sure that your mental toughness, focus, concentration, and level of communication goes. I know they were tired, but we were making plays and were never not in the game. Even after we lost the lead, we were still right there. Those are the kind of things that you wish you had back, but we’ve got to learn from that and hope they don’t happen again.”