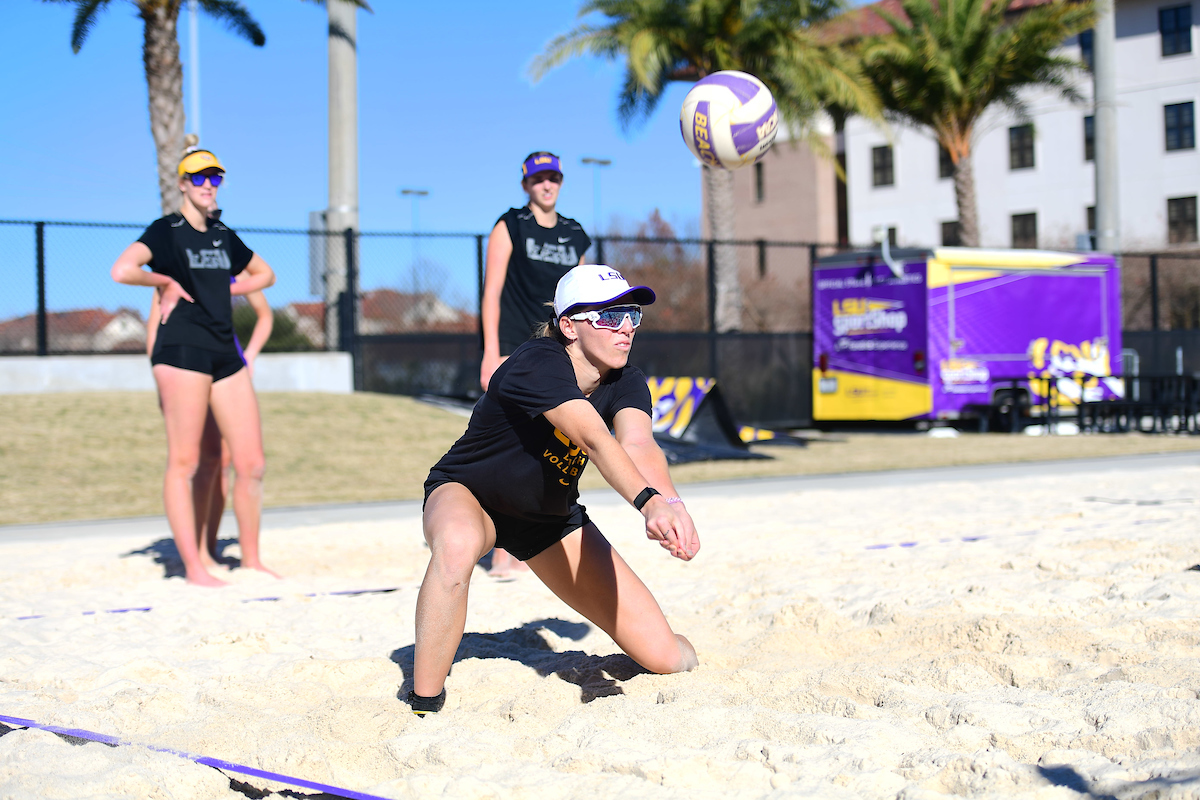 BATON ROUGE – The LSU Beach Volleyball team returned to practice Tuesday afternoon in preparation for the spring season with every piece back from last year’s squad that surged to the top of the rankings before the season ended prematurely.

“Our ability is not going to limited by our talent,” said head coach Russell Brock. “We are so technically sound and so good that it will be other things. To have a comfort level in knowing that we are so much further along than we’ve ever been as far as talent, we can take the time to focus on being the best teammates and people that we can possibly be.”

Brock announced Monday that the Tigers finalized their roster with the addition of three players; Hannah Brister, Jess Lansman and Olivia Ordonez. The latter two played critical roles for the Tigers last season as seniors and decided to come back for their extra year of eligibility after sitting out the fall. Brister joined the program as a graduated transfer after having one of the most successful careers in Northwestern State history.

With every player back from last year’s No. 1 ranked team plus the addition of five freshmen and two graduate transfers, the Tigers will look to repeat the success they had in the sand in 2020.

LSU began last season in Hawaii at the Duke Kahanamoku Beach Classic in Honolulu where the Tigers earned some hardware to bring home, defeating No. 19 Stanford, No. 5 Hawaii and ultimately No. 1 UCLA in the championship match. A week later LSU welcomed UCLA, still ranked at the top of the polls, to LSU Beach Volleyball Stadium where fans packed the stands for a NCAA College Beach Volleyball On-Campus Attendance record. LSU took down the top team in the country for the second straight week.

The Tigers overtook the Bruins for the top spot and earned the program’s first No. 1 ranking.  They went on to sweep through five matches at TCU’s Fight and the Fort, retaining the top spot in both the AVCA and DiG polls. Before LSU was able to compete again though, the season was ended prematurely due to the Covid-19 pandemic.

The NCAA granted all spring sport student-athletes an extra year of eligibility. Four of last year’s six seniors – Claire Coppola, Taryn Kloth, Kristen Nuss and Toni Rodriguez – announced right away that they would use that extra year. Lansman and Ordonez decided to return after sitting the fall out, giving the Tigers every piece back from last year.

This season will look slightly different as LSU has instituted new safety measures due to the virus. There will be limited seating and fans will be required to wear masks among other policies to be released at a later date, but the season will occur with matches beginning in the latter part of February.

“The biggest task over the next month or so will be to understand how good we actually are,” said Brock. “There will be bumps in the road. In our current environment we may need some people to step up and help out in ways that we weren’t expecting.”

Every pair that competed in multiple matches together last season had a winning record and those pairs could be used again, but new additions and in a new year the potential pair combinations are endless for the Tigers. As the season inches closer coach Brock, assistant coach Cati Leak and volunteer assistant Drew Hamilton will narrow down what the pairs will look like for the opening weekend of matches.