Beach Finalizes Roster For Season Ahead 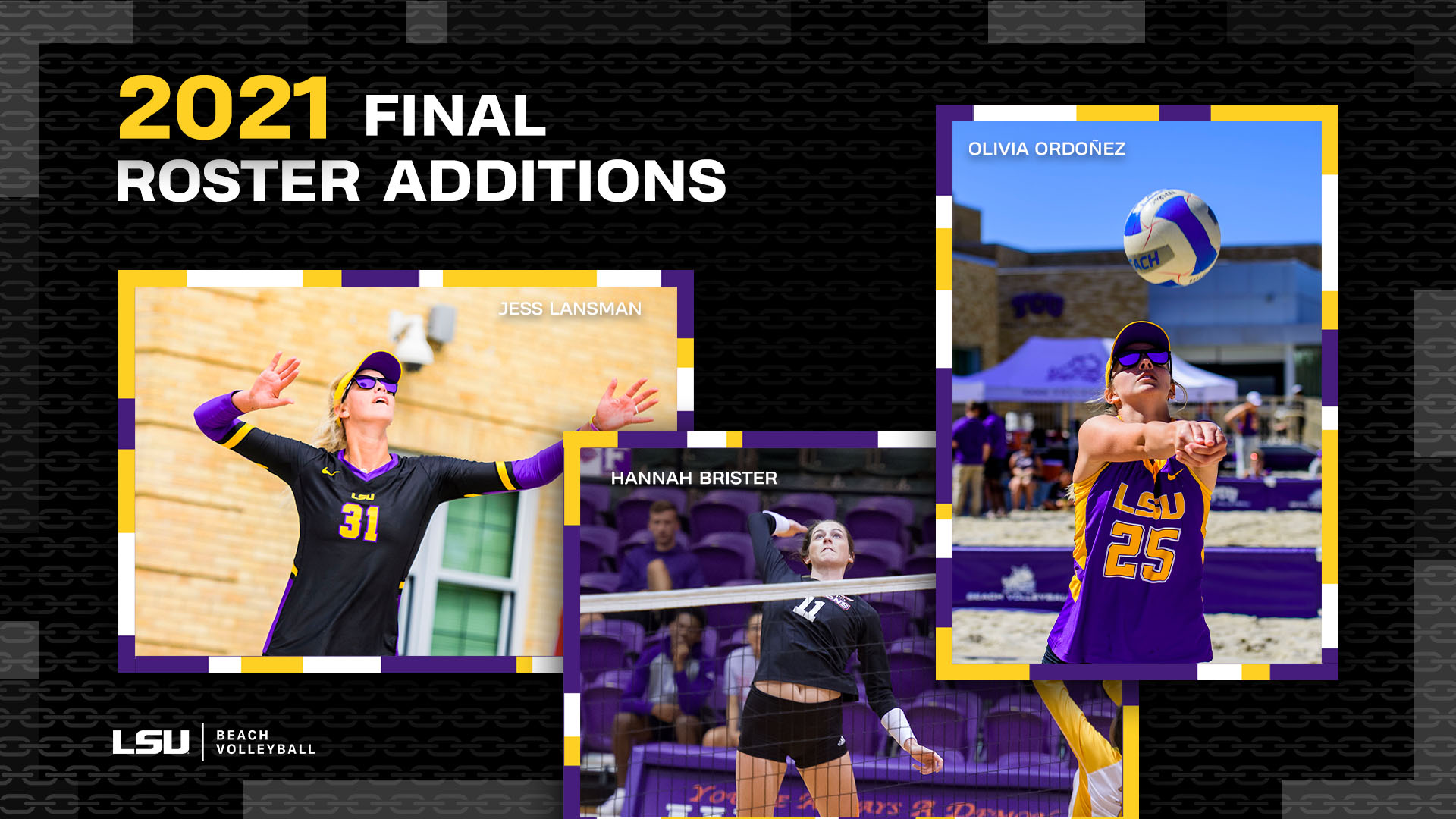 Lansman and Ordenez both played for the Tigers last Spring before the season was cut short. After the NCAA granted all Spring sport student-athletes an extra year of elgibitility, both Lansman and Ordenez originally announced they would not return, but after a Fall away from the sand they both decided to come back for their final spring.

With both Lansman and Ordenez back, the Tigers are returning every piece from their roster a year ago when LSU became the No. 1 team in the country for the first time in program history.

Hannah Brister, a native of Paincourtville, Louisiana, is set to join LSU as a graduate transfer from Northwestern State where she contributed for the Lady Demons throughout her entire career. She comes to Baton Rouge with two seasons of eligibility remaining.

Brister was an outside hitter for NSU and as junior became the first Lady Demon to be named Southland Conference Player of the Year when she set a NSU single-season record with 539 kills. Later on, she became the eighth player in school history to reach 1,000 kills. At the end of her junior year, Brister ranked in the NCAA Top-20 in kills, attacks and points.

“Hannah will be making the transition from an incredible indoor player to the sand,” said Brock. “We’ve seen many players make this successful transition in our program and we expect that Hannah won’t have any issues following in that history. She is an incredibly athletic player who has already been investing in learning how to play our sport. Her commitment to developing her skills and in building relationships with our team has been impressive. It’s clear that she is coming in ready to make a positive impact to the 2021 season.  We are also really excited that she will be here next year as well.”

After a Fall away from beach volleyball, Ordonez decided to play out her final year of eligibility with the Tigers. Prior to the season ending, Powers was undefeated on Court 5 with Hunter Domanski, going 7-0 and defeating pairs from No. 17 Arizona and No. 16 TCU. Ordonez and Domanski’s seven wins together helped elevate and maintain LSU as the No. 1 team in the country, where the Tigers finished when the season was called to a halt.

Ordonez’s 63 total wins rank as the eighth most in program history and as a freshman in 2017 her and Katie Lindelow won 25 matches as a pair, the most wins by and LSU pair that is not Claire Coppola and Kristen Nuss. Ordonez was a critical piece in each of the three seasons the Tigers have made it to the NCAA Championship Tournament in Gulf Shores.

“We are excited to have Olivia back,” said Brock. “She has the trust of our team and brings a truth and love in her care for her teammates that is genuine and earned through consistent character over the last four years. Olivia is one of the best blockers to have ever played for our program, so having her back for training and as a mentor will be really important as we head toward the season. Her proven ability to play at an elite level is an incredible addition.”

Like Ordenez, Lansman had great success for the Tigers last Spring. Playing in all 14 matches with partner Sydney Moore on Court 2, Lansman was 10-4. When LSU hosted then No. 1 UCLA on February 29, it was Lansman and Moore who earned the clinching point on Court 2 for the Tigers as LSU ultimately overtook the Bruins for the top spot in the rankings.

Lansman joined the program last year after having a highly successful indoor career at Iowa State. Following a productive first year in the sand, Lansman could make a big jump in her second season after transitioning from indoor to beach volleyball.

“In just one year Jess made incredible progress as a first time beach player,” Brock explained. “Traditionally the second year is when new players make their biggest jump, so the upside for Jess in 2021 is off the charts. The influence she has on the energy and focus during training and competition is undeniable. Her impact on the court pales in comparison to the impact we know she will have off the court. She is a passionate leader who cares deeply and personally for her teammates.”