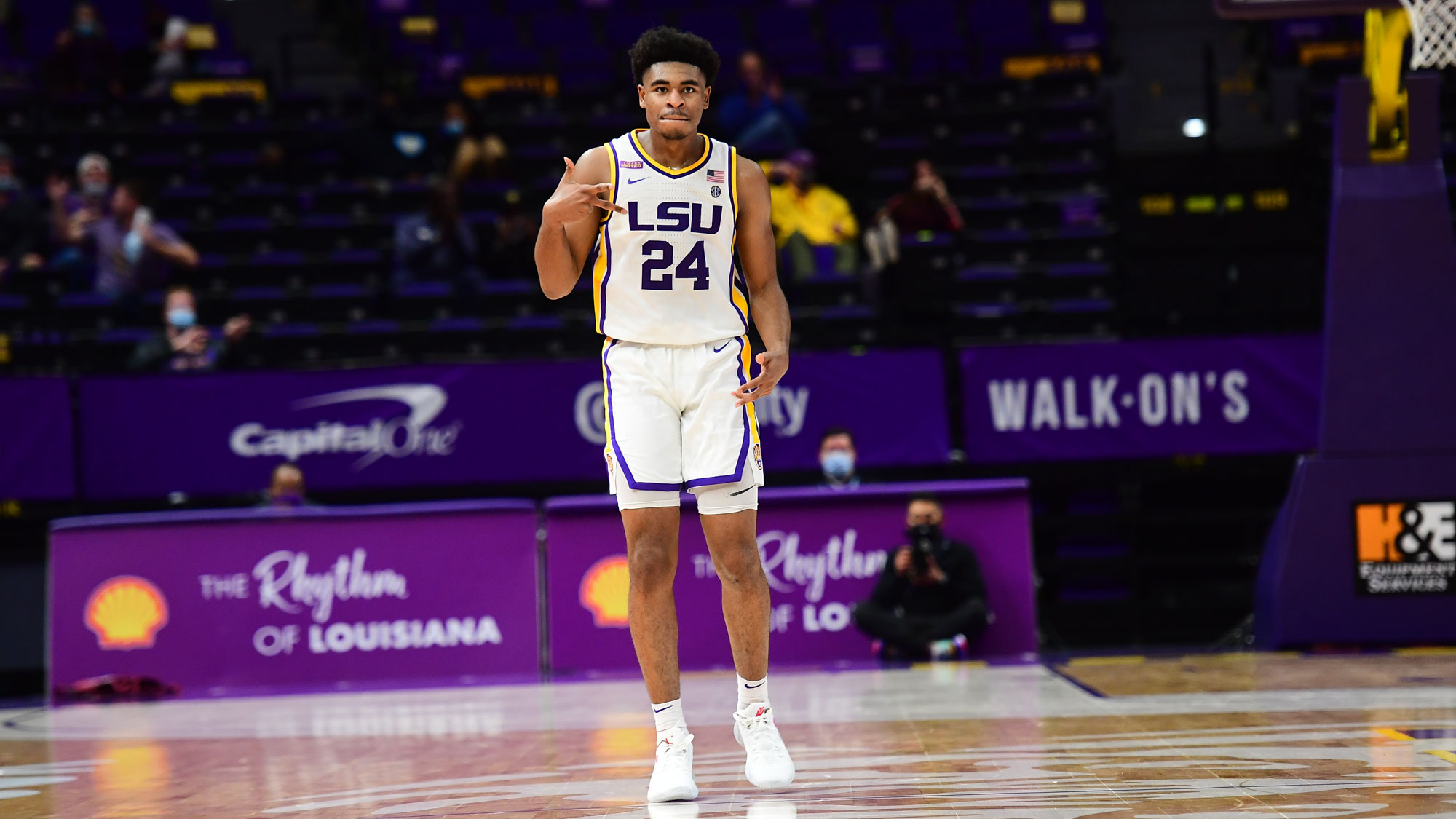 The Tigers are now 6-1 overall and 1-0 in the league headed to a Saturday CBS road date against Florida, while Texas A&M dropped to 5-2 and 0-1 in the league.

Thomas posted a career night of 12 field goals, including five treys to go with three rebounds to finish with 32 points. It is the most points by an LSU freshman in a conference opener since Jan. 2, 2016 when Ben Simmons scored 36 in a 90-82 win at Vanderbilt. Thomas had on Monday earned SEC Freshman of the Week honors after scoring 29 against Nicholls on Saturday.

Thomas has five 20-plus point games this season and that is the most in Division I by a freshman this season. Thomas has scored at least 15 points in all seven of his career games at LSU. It is the longest career opening streak of 15-point games by an SEC player over the last 25 seasons, according to ESPN Stats and Info.

Days had his second double double of the season with 18 points on 7-of-13 shooting with three treys and a free throw to go with 10 rebounds as LSU’s other double figure scorer.

Days and Thomas combined for 50 of the Tigers’ 77 points as eight-of-the-nine Tigers that played scored.

In the second half, A&M was able to cut the margin to 11 points 3:30 into the half but the Tigers exploded out again, getting their first 20 lead of the game at the 10:49 mark when Thomas scored on a dunk to push the LSU lead to 61-40.

LSU’s biggest lead was 26 points with just under eight minutes remaining in the game.

Javonte Smart only scored two points but had six of LSU’s 16 assists. Senior Charles Manning Jr., hit 4-of-7 field goals in scoring nine for the Tigers and led the team in plus-minus stats with a +25.

Coach Will Wade and host Chris Blair will be at TJ Ribs on Acadian Thruway Wednesday night at 7 p.m. for the Will Wade Show presented by Hancock Whitney. The show will air on the affiliates of the LSU Sports Radio Network (Eagle 98.1 FM) and be seen later on Wednesday on tape delay on Cox Sports TV.

“Good win. I thought we played much better. Our defense was better. I thought we kept the ball in front, we guarded the ball better than we have. I thought we rebounded pretty well. We gave up some offensive rebounds in the first half but they did a great job of tipping them out. We had our guards coming down and they tipped them out from where our guards would be so they chased some things long and loose. I thought Darius Days played great, obviously Cam [Thomas] was tremendous. I thought Mwani Wilkinson played well. It was good to get Charles Manning back in a rhythm. Josh LeBlanc did some good things for us. Just a total team win. We had a good practice yesterday, outside of losing Shareef [O’Neal] yesterday with his foot. He should be back hopefully within a week or so. I thought we had a good practice, good preparation, we were a little more locked in and it showed tonight.”

“Also, I thought Javonte (Smart) played great tonight. He had six assists, two turnovers, I know he didn’t shoot it great. But it’s hard to do. Yesterday was his first full practice with us and for him to come back and play a bunch of minutes and do what he had to do in this type of situation, I thought he did well. But I think our guys are poised. It helps when we have some of those veterans out there like Javonte, Trendon (Watford), and Days. I think it helps when we have those guys out there. But I think Cam [Thomas] is poised, I think Mwani is wise for his years, LeBlanc’s been around the block a little bit. We’ve got some guys who have done it at a high level over a sustained period of time and hopefully we can keep that trait this year.”

On the work Cam Thomas puts in…

“He’s as consistent of a worker as I’ve ever seen as a Freshman. He’s never late, he shows up every day. He has a 9 a.m. shooting slot every morning, six days a week. He only doesn’t shoot on Saturday mornings. He shoots Sunday through Friday, every day, 9 a.m., for an hour and 15 minutes, and gets his work in. He’s about his business, he prepares well, he watches a lot of basketball, he knows what’s going on, he’s got a great feel for things. He’s got a great feel for open areas and where things are. He’s a tremendous talent and I’m glad he’s playing for the Tigers.”

On Darius Days and Cam Thomas scoring…
“It’s fun to watch. They’re two prolific scorers. We’ve got a lot of guys on this team that can really score it. Those are certainly two of them, you have Watford and Smart who have done it. I’m telling y’all, we haven’t seen it yet but Eric Gaines is built the same way. He’s electric. He had 35 in one of our scrimmages, he can really go. We’ve got some guys. I thought LeBlanc did a great job on the glass. It’s fun to watch. Tonight, when we guard like that, we’re a little more fun to watch, but we’re always fairly solid offensively. I give our guys a lot of credit tonight offensively. The way A&M plays, I told them, ‘This is about players, this ain’t about plays.’ Usually we can dial some stuff up and get guys looks and that sort of thing. This was players, playing in space, having to play off two feet, making the right reads and that sort of thing. Our players did a really nice job.”

On playing with Cam Thomas and how he played tonight …

“Phenomenal. He is one of the guys that I am glad we have on the team. He can stuff the sheet with points. He rebounds well. He does a lot of good things for us. He just works. He is a worker. Day in and day out, he is in here shooting. That’s why he is making the shots that he makes. He is in the gym every day and putting up shots.”

On his own success tonight …

On his confidence when shooting the ball …

“It was a great night for me. I prepared very well. I was very confident in what I came in to do.”

“Just my preparation and rhythm. I am getting a better rhythm. For my preparation, I’ve been shooting shots before the game and in practice. I’ve just been getting shots up on my own, so I feel like I’m in more of a rhythm now than I was the past few games.”
—
Texas A&M Head Coach Buzz Williams

On how he prepared to defend against LSU Guard Cameron Thomas…

“I think he (Thomas) shot 100 balls entering today’s game. I think maybe 44 balls more than any other player on their team. He’s a very talented player and I think he’s the leading scorer in the SEC and ninth-leading scoring in the country. He’s a very hard matchup and can score at all three levels. We spent an enormous amount of time, not only on him but on their entire roster. They’re a top-10 team, in my opinion, in the country in personnel. Thomas is a really effective scorer, as he was tonight. He was their leading scorer in the previous game and he was their leading scorer tonight. We were prepared and we were not caught off guard relative to his talent.”

“No sir. I don’t think that we had any response whatsoever in regards to our competitiveness against TCU. I thought that tonight our competitiveness and the spirit that we tried to operate with was dramatically different, almost 180 degrees to be honest with you. I think the TCU game started out 10-to-eight, and from that point forward I don’t think we tried very hard on either end. I think that we really tried tonight. We did not close down the last possession or two or going into each media timeout. Our consistency in training for a fight such as this game has to improve so that the consistency comes to life in the figurative fight in a game like this. That’s what we have to work on.”

“On a scorer that can score at all three levels, what you want to do is make one more step to him relative to your gap when you’re off the ball. So, if he has the ball on the right wing, whoever is in the right corner needs to take a step closer to him. Whoever’s at the top of the key, take a step closer to him. You’ve got to crowd him, not only when he has the ball. You don’t want to get beat off the bounce, but if you do, there needs to be quick gap pressure. I think that’s the adjustment you would make on anybody that can score as prolific as he can. We study synergy with all of our guys, including ourselves even. What does he do when he goes left, or goes right? We study all of those numbers and all of those breakdowns. He’s a really good player. He took a third of their shots, but obviously he was very efficient.”