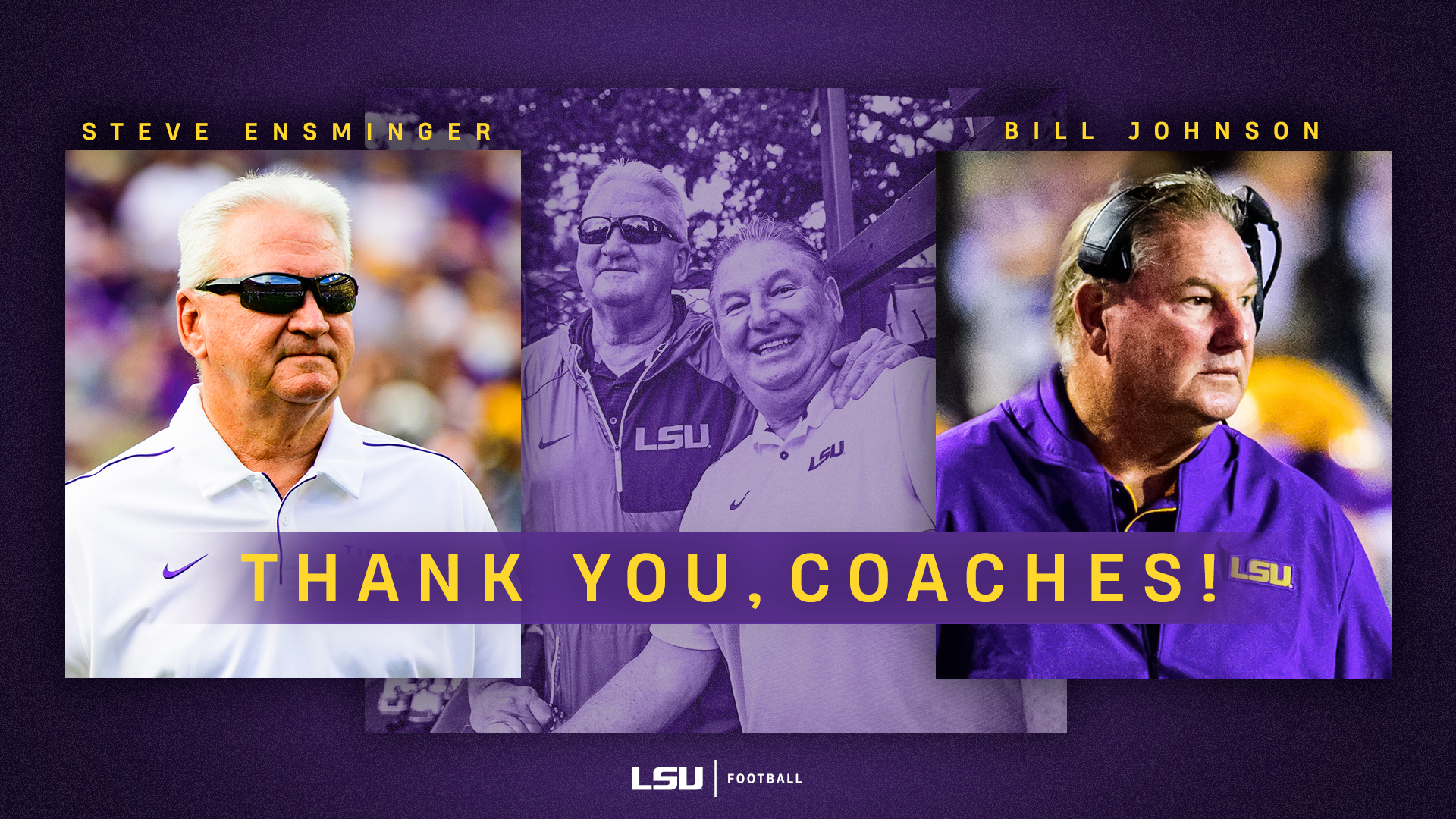 BATON ROUGE – Steve Ensminger, the offensive coordinator for the most successful team in LSU history, and defensive line coach Bill Johnson have both announced that they will retire from on field coaching duties and will transition into analyst roles on the Tiger staff.

Ensminger, who played quarterback for the Tigers under Charles McClendon in the 1970s, just completed his 11th year on the LSU coaching staff, the final three coming as offensive coordinator and quarterback coach. Ensminger joined the Tigers in 2010 as tight ends coach. Ensminger also served as offensive coordinator and quarterback coach for the final eight contests of the 2016 season when Ed Orgeron was elevated to head coach four games into the season.

“Steve gave everything he had to LSU and I will always cherish the time we spent coaching together,” LSU coach Ed Orgeron said. “Steve treated everyone on the staff and the players on our team like family. He bleeds purple and gold – I don’t know of a better LSU man. From a coaching standpoint, he’s the best. From game-planning to play-calling, Steve was outstanding. He developed our players on the field and he helped mold them into young men off the field. I can’t thank Steve enough for his loyalty and his willingness to do whatever was asked of him.”

LSU’s 2019 offense was called by many as the best in college football history as the Tigers were the first to feature a 5,000-yard passer (Joe Burrow), two 1,000-yard receivers (Ja’Marr Chase and Justin Jefferson) and a 1,000-yard rusher (Clyde Edwards-Helaire). The Tigers set 15 school records, seven SEC marks and two NCAA records on their way to a 15-0 record and the national title with an offense that featured a Heisman Trophy quarterback in Burrow and three first round draft picks (Burrow, Jefferson, and Edwards-Helaire).

Ensminger directed a Tiger offense that led the nation in scoring (48.4) and yards per game (568.4) in 2019. It marked the first time in conference history that a team from the SEC led the nation in both categories. In 15 games in 2019, LSU scored 40 points or more 12 times, which included four 50-point games and three 60-point games. Additionally, LSU racked up 500 yards or more of total offense 12 times, including 628 against Clemson in the national championship game and 692 in a win over Oklahoma in the national semifinals.

“Bill is an outstanding football coach and a tremendous man,” Orgeron said. “I have great respect for Bill and the job he did teaching and developing our players. He stepped in and made an immediate impact with our defensive linemen two years ago and I will always appreciate his dedication to the LSU Tigers.”

In two years coaching the LSU defensive line, Johnson had a pair of players earn All-SEC honors in Rashard Lawrence and Ali Gaye.