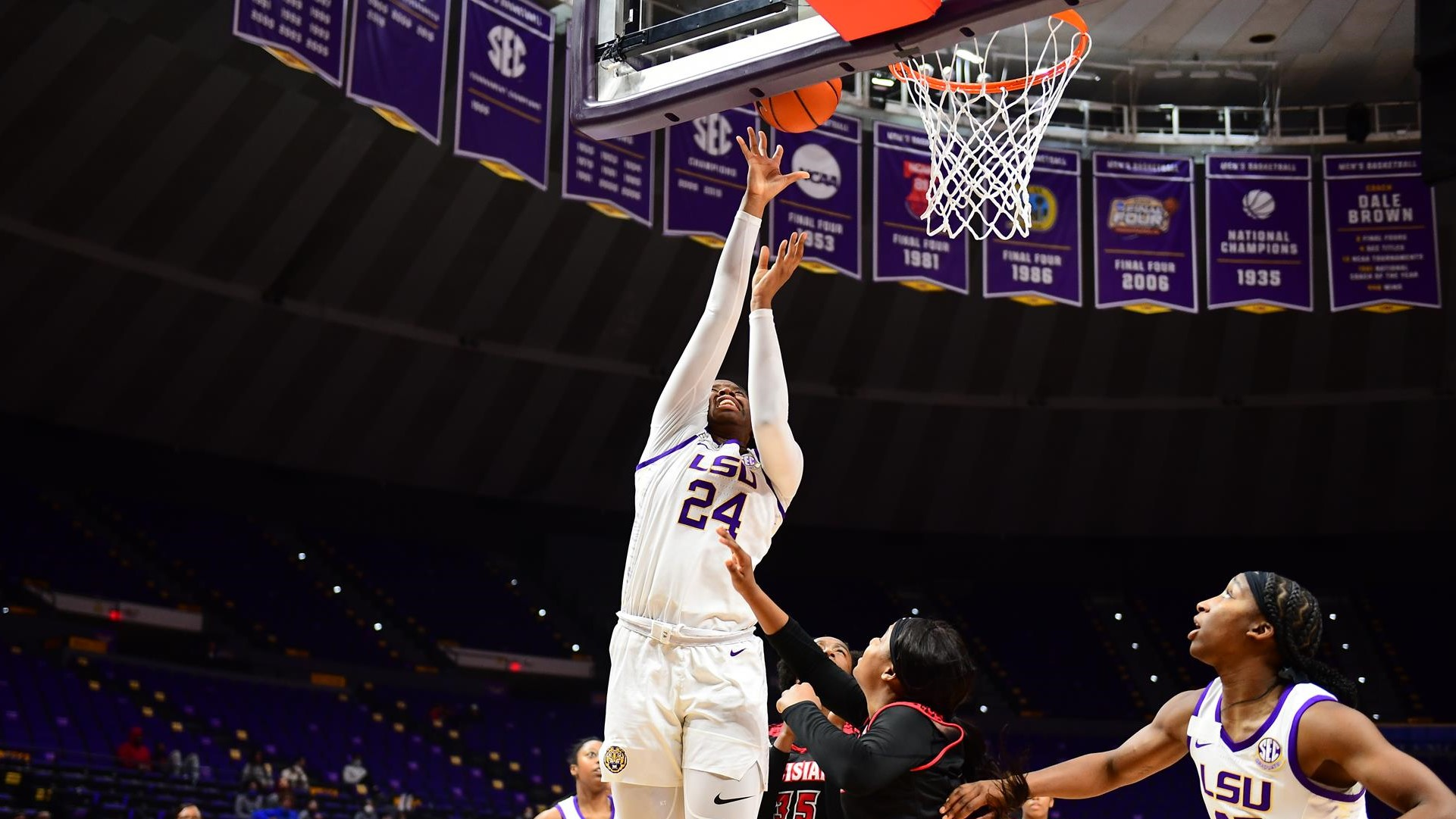 BATON ROUGE, La. — The LSU women’s basketball team took on Louisiana-Lafayette inside the Pete Maravich Assembly Center Monday after closing out their Finals Week. The Tigers took down the Cajuns, 62-57, bringing their record to 1-3. With the loss, the Cajuns fall to 1-2.

The Cajuns replaced Texas Southern on the schedule after TSU encountered COVID-19 concerns within the program.

Redshirt senior Faustine Aifuwa led the way for the Tigers finishing with her second double-double of the season and the 11th of her career. Aifuwa had 15 points and 12 rebounds. Four Tigers finished with double digits in the scoring column: Aifuwa, sophomore Domonique Davis (13), sophomore Tiara Young (10), and senior Khayla Pointer (10). Davis’ 13 points was a career high. She also finished with six rebounds and three assists.

On winning this game…

“This group is making me get more grey hair, we’re making the game harder than it needs to be. I think we had some really good looks with layups, points in the paint. I think we could’ve scored at least anywhere from 16 to maybe 20 more points in the paint but ULL is a very gritty team. They play hard, they don’t have quit in them, so this is a really good challenge for us. I like the play from Faustine Aifuwa. I thought she really showed up and showed how she can rebound for us. Those offensive putbacks, we talked about that being an area of concern. I thought we converted a little bit better in transition in the second half, cause in the first half we were only 3 of 11 in that area. Again, it’s just a good win for this group to know that they can put a win on this side. 18 assists on the night, that’s a very unselfish team.”

On the many assists …

“You don’t want to overthink the game by overpassing, and I can see what they were trying to do but again, this group is still gelling and learning each other. I thought we at least gave ourselves a good start by not playing come-from-behind. We definitely had a drought there in the second half of the first quarter but this team showed that their defensive intensity can really step up when need be.”

“Yeah, I like the grittiness of our guard play right now. We needed to have energy plays and I thought we had those. That’s how the game, when you start going into runs, it’s because somebody does something gritty like take a charge or turns the ball over. It allows us to get our emotions going and that leads to transition baskets and turn right back around and press and it allows you to control the tempo of the game.”

The Tigers head out to Las Vegas, where they will take on two teams at the Duel in the Desert in the Thomas & Mack Center. On Saturday at 3 p.m. CT, the Tigers will take on Pacific and on Sunday at 2 p.m. CT, they will face off against Loyola Marymount. The matchups will be streamed on FloHoops.com. As always, you listen to the LSU Sports Radio Network on 107.3 FM in Baton Rouge.