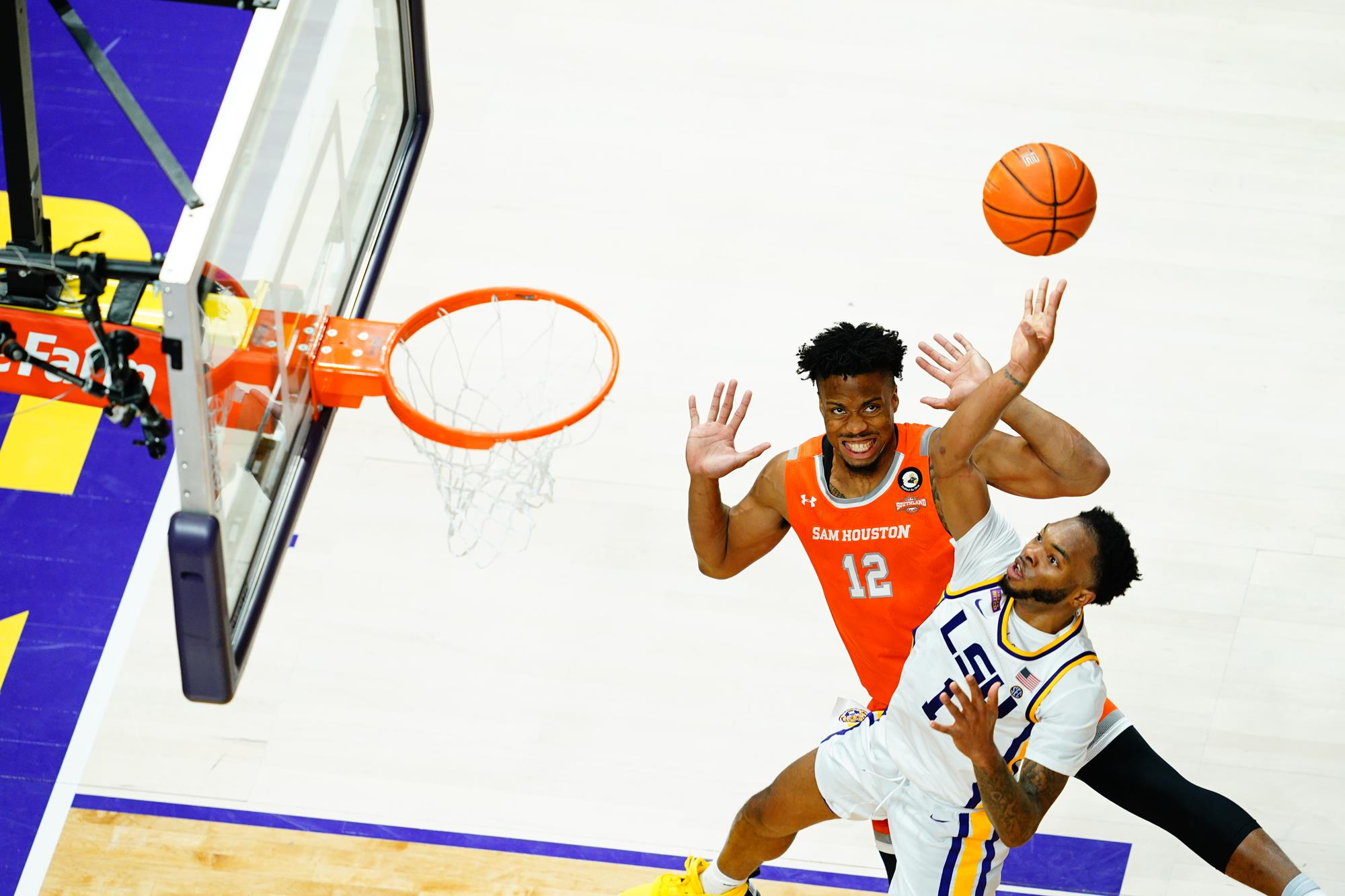 The hastily scheduled game was played in front of a few fans on teams’ player-guest lists and without LSU Coach Will Wade because of Covid-19 issues.

Javonte Smart posted 25 points, hitting 11-of-15 shots and three treys to go with six rebounds and five assists. For Smart it was his second highest scoring game at LSU, four off his career high of 29. His 11 field goals was also an LSU career high for his three years in Baton Rouge.

Cameron Thomas added 19 points and Darius Days had his first double double of the season with 16 points and 10 rebounds for LSU (4-1). Baton Rouge product and Georgetown transfer Josh LeBlanc Sr., played for the first time on Monday scoring five points with eight rebounds in 14 minutes of play.

The Tigers played without starter Trendon Watford, who injured an ankle over the weekend in practice.

Sam Houston (3-4) was led by Demarkus Lampley with 16 points and Zach Nutall with 13.

LSU outrebounded the Bearkats, 47-33, but turned the ball over 17 times. LSU did take more advantage of turnovers getting 26 points from turnovers compared to 11 for Sam Houston State.

The Tigers will host UNO on Wednesday night at 8 p.m. on the SEC Network and on the LSU Sports Radio Network. Coach Wade is not expected to be on the sideline for that contest.

Opening Statement:
“I appreciate you guys for having me. I would just like to speak on our team, our guys and just the culture of the program Coach (Will) Wade is put in to be where we can operate under these circumstances. All of that goes to Coach Wade and the culture he created for all of us to be able to step in and do our jobs under these circumstances. Everybody, from the players, to the managers, to the staff that is here. That’s a testament to Coach Wade’s culture and the program. For the players to be able to play this game is a testament to them. To be able to take care of themselves on and off the court, to be able to get to practice, and do everything that’s asked of them is a testament. Hopefully, you guys can see how excited they are to play. I think they gave good energy, especially being an 11:00 am game on a Monday, which we hardly ever play, and under the circumstances we’re under, and the limited ways we can practice. I was proud of their effort. Sam Houston State gave a good fight, but our guys never panicked and they stayed under control. That’s a testament to our point guard. Without Coach Wade and without Trendon Watford, Javonte Smart stepped up and got the team to do what they needed to do. Obviously, we got contributions from everybody else, with Cameron Thomas and Darius Days with a double-double. Cam really stepped up in the second half of the game and made good plays, and Josh LeBlanc on the defense.”

On how Coach Wade let him take the reins for this game…
“It was a collaborative effort as always up until today. We talked all the way until I arrived here. He said, ‘You’re prepared for this.’ He was excited about the opportunity I had. It’s just a testament to him, the culture and this program. He prepared us for this because of the situations he knew we might be under.”

Opening Statement
“Certainly, an interesting couple of days but proud of our guys. A lot of personnel, players, staff and we found a way to win. Coach Armstrong did a tremendous, tremendous job. Our leadership group did a great job. Time to move forward now.”

On the contact tracing …
“I can’t get into the specifics. I’ll just talk about myself. I was in quarantine from a contact tracing issue last week. When I was in quarantine, I tested positive. So, I have had COVID. I’m out because of COVID. I don’t have any major symptoms. I don’t have any major issues. But I tested positive for COVID early last week. I’ve been coaching and doing everything from Zoom like you see now. But that all started with contact tracing issues with other folks who are missing today.”

On not having Coach Will Wade and some players during the game today …
“Most definitely. We found out that Coach Wade was not going to be with us a couple days ago. Something happened to Trendon (Watford) in practice the other day. Charles (Manning Jr.) came and played today. (Josh) LeBlanc came and played today. We didn’t have any downfall because some of the guys weren’t here or because Coach (Wade) wasn’t here. Coach (Bill) Armstrong stepped in as head coach and he did a great job because we came out with the win. Everybody played well. Some of the guys stepped up. Javonte (Smart) played big. Josh LeBlanc played incredibly big. Great stoppage, great rebounds. Easy buckets around the basket. Cam (Thomas) always steps up. Everybody played well today.”

On the second half and Josh LeBlanc’s energy …
“Oh, great energy. Both ends. On the glass. We love him. He is a great addition. At the first couple of games, he wasn’t playing with us. We’re just happy to have him. We need somebody that I like going to battle with. Somebody that is going to be on my bag and help me down the stretch.”

On the early start and if that impacted his first half …
“My guess is that there is a lot that comes with that. Not having Coach Wade and not having Trendon (Watford). We had to fit a few pieces together to come up with the win today. All I can say is we won in the end. I’m just happy to win.”

On how to prepare for missing teammates and coaches or added games this season…
“Coach Wade preaches every day, the team that gets through all of this, during COVID, missing games. Whichever team that fights through all of this will be the ones that win at the end. We just want to keep fighting and keep working every day. Every day we get in the gym, just keep working. Just hopefully win every game and get out there on the floor together.”

On how it feels to finally get out on the court and play …
“First I just want to start by thanking God for being able to be here. To continue to play this game. It felt amazing. Just being able to get back out there and play the game I love with the guys I like being around. My teammates to work and grind with every day. I have been grinding for a year. Just practicing every day. Watching film. Watching the games. Just dying to get out there. Today was real exciting. It was a real big step for me.”

On how his game has evolved over the last year and on this team moving forward …
“When I came in the door I was like, ‘I’m still kind of small.’ I came in the doors a little underweight. Since I’ve been here, my whole thing has been lifting, getting stronger. I’ve always been a good rim protector, but I wanted to work on my defense. That’s the biggest thing that I’ve really been trying to evolve. I feel like I’m doing a pretty good job at just working on my defense. Learning how to play off the ball. Coach Wade is good at teaching. Just watching the stuff like that.”

Opening statement…
“I thought with about six or seven minutes to go we were right there. Then it was very disappointing how we played the last six or seven minutes of the game. I think they had 68 at the seven-minute (to go) mark and ended with 88 so we gave them 20 points in six minutes and that’s just unacceptable. Disappointed. We’ve got to learn. We have nine new players and we’ve got to learn how to fight through adversity. We have to learn how to fight through the finish. We’ve got guys that are still just trying to figure out our culture, figure out what we’re about here at Sam Houston. Giving up 20 points in six minutes is not what we are.”

“But you know, their head coach (LSU’s Will Wade) wasn’t there today and their best player (Trendon Watford) didn’t play. There’s a lot to it today. You’ve got to give credit. I thought coming in to today on tape that this was the most talented team in the country, for sure. He could play 13 guys. They’re really, really good. Really good.”