Worsham: The Win Was Unprecedented. The Story is Familiar. 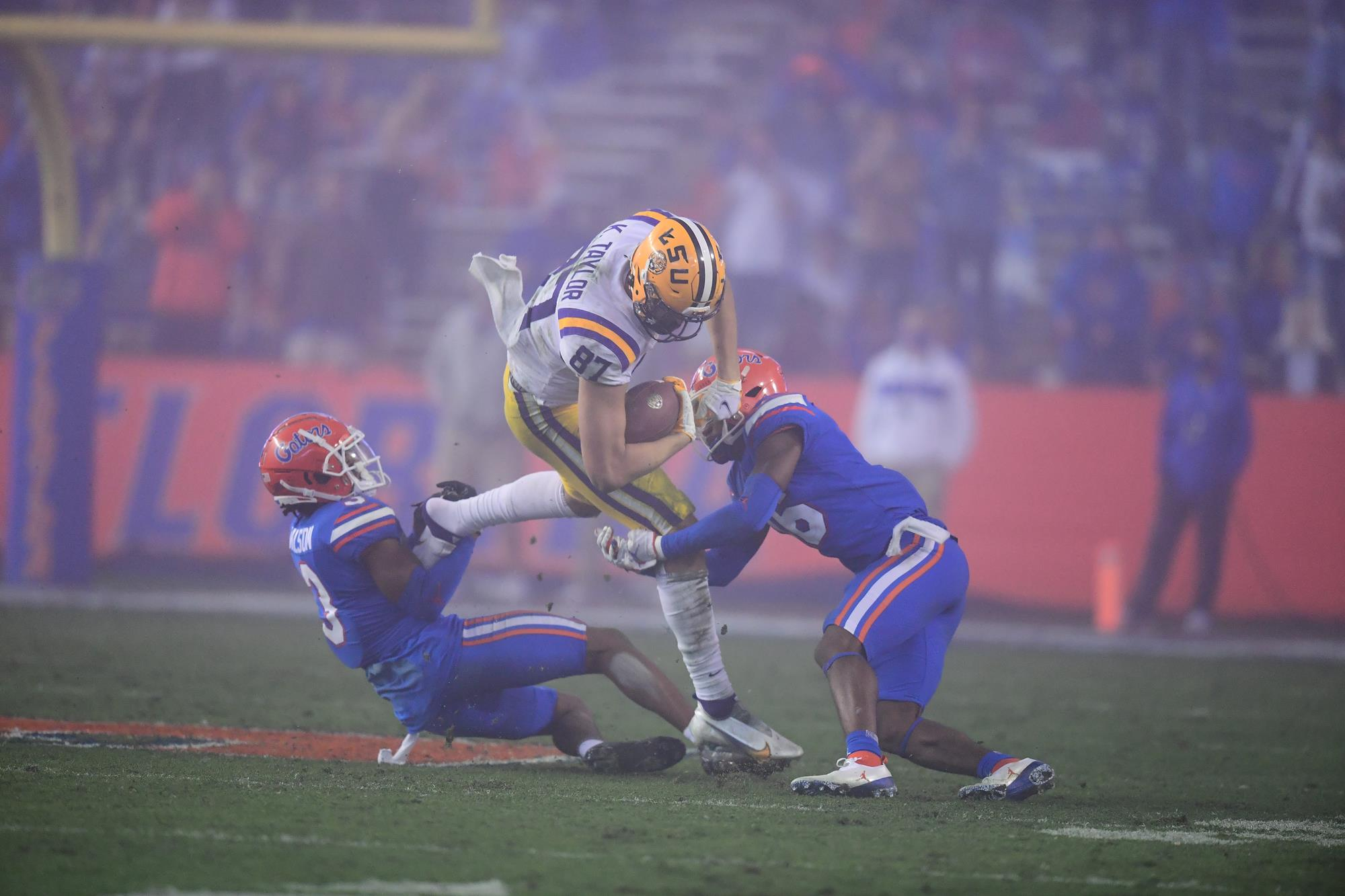 “If you pay attention, you’ll see something you’ve never seen before,” says the best piece of writing advice I’ve ever encountered. “Write about that.”

On Saturday night, you didn’t have to pay very close attention to see something you’ve never seen before. And there was plenty to write about.

Yes, LSU went to The Swamp and beat Florida. Yes, we’ve seen that before.

But the way it happened?

Have you ever seen a sophomore kicker blast a ball 57 yards with 23 seconds left through a fog so thick you’d expect to see the Golden Gate Bridge sticking out of the top of it?

Cade York’s kick didn’t clear the international orange of the world’s most famous overpass, but it did pass over the yellow uprights of Ben Hill Griffin Stadium to give the Tigers a 37-34 victory over No. 6 Florida.

Another Classic Between LSU and Florida

One Team. One Heartbeat. pic.twitter.com/pgOZ9AwyZv

LSU’s offense aimed to reach the Gators’ 33 yard line, which would have given York a 50-yarder for the win. We’ve seen that before. York, named a semifinalist this week for the Lou Groza Award as the nation’s top kicker, was 4-for-5 on 50 yarders in the Tigers’ 2019 national championship season and entered Gainesville 4-of-5 on kicks of that distance.

But the longest kick he’d made in two seasons at LSU was a 53-yarder earlier this season against Vanderbilt, an attempt with relatively low stakes and almost no fog. On Saturday, a blanket of mist with the approximate consistency of whipped cream settled over York as he lined up a 57-yarder in a game that felt essential, to his team and to his program.

“When the fourth quarter came around, I started seeing the fog roll in,” York said. “I walked out on the field at one point to see if I could actually see. I got out there, and it was a little bright. I couldn’t necessarily see the ball.”

Despite the low visibility, his head coach couldn’t see any reason not to put the game at York’s feet. Nor could he see any reason to say anything to his kicker before the longest attempt of his life as a Tiger.

“I didn’t want to mess him up, so I let him go,” Ed Orgeron laughed after the game. “But I talked to (LSU special teams coordinator Greg McMahon). I said, ‘Mac, what do you think?’ He said, ‘We’re going to make it.’ Tremendous job by the protection, tremendous job by Cade.”

LSU’s history of special teams heroics in this rivalry is a familiar tale, but York’s kick has no peer. That’s not how he thought about it in the moment, of course.

As incredible as York’s kick was, his foot needed the help of another to set the stage for victory. The Tigers looked stopped on their game-winning drive, when Max Johnson’s toss to Kole Taylor on third down failed to move the chains with 1:51 to play. But Taylor’s shoe came off during the play, and before the Tigers’ punt unit could run on the field, a Gator defender threw the cleat “20 yards down the field” and drew a 15-yard penalty.

Football is often said to be a game of inches, but Saturday, it was a game of feet.

“I don’t think I’ve ever been in a game where an opponent threw a shoe,” is an actual quote from Orgeron after the game.

Strangely enough, Orgeron predicted the cleat-toss – kind of. The play, like the game, was singular in its content but familiar in its context. It was in Florida that LSU rediscovered itself in 2017 after losing at home to Troy and began to build the foundation of a 10-win season in 2018 and a national title-winning season in 2019. And it was in Florida that LSU found itself 3-5 in 2020, fresh off a blowout defeat at home to Alabama.

Friday night before the game, Orgeron addressed that, and he warned the team that something special could happen, if they put themselves in the right position.

“There were a lot of motivational speeches last night,” Orgeron said. “I told them, ‘This is the same room that we sat in after we lost to Troy. Florida missed the extra point attempt (the next game, a 17-16 LSU win in 2017). It may come down to that, but whatever it comes down to, we’re gonna fight through.”

Johnson was much more blunt in his assessment of the play.

“Coach O said in the meeting yesterday that one player is going to win the game for us on a play,” the freshman quarterback said. “I think that probably the biggest play was our tight end Kole’s shoe came off. The defender threw it, and of course, it helped us move the chains.”

Johnson made a few firsts himself against the Gators. In his first career start, he became the first Tiger quarterback in history to throw three touchdown passes in the Swamp. The 19-year-old lefty lofted a perfectly weighted five-yarder to Jaray Jenkins in the first quarter, a pinpoint-accurate 34-yarder to Kayshon Boutte in the second quarter, and a third-and-goal dime to Tre Bradford from four yards out in the fourth quarter.

The moxie Johnson displayed in his first career collegiate start – on the road, against a top-10 opponent, with a limited number of scholarship players at the disposal of the offense, and the damaged morale of a 3-5 season – can’t be measured. But all three touchdown passes came with the Tigers trailing. The first one tied the game, and the last two gave LSU the lead.

“I was really comfortable,” Johnson said. “Coach (Steve) Ensminger put me in the right positions. The O-line did a great job. They protected me really well tonight. The backs did a great job and the receivers went and made plays for me. It was a great game for us.”

In a game full of firsts, it was only fitting that freshmen led the way for LSU. Johnson completed 21-of-36 passes for 239 yards and added 52 more on the ground. Boutte grabbed five passes for 108 yards. Jacquelin Roy posted two sacks, Elias Ricks returned his second interception for a score this season, and Dwight McGlothern used his head to deflect an interception into the arms of Jay Ward, a play without precedent in a game without precedent.

This INT by LSU was confirmed after replay review: pic.twitter.com/g2lSbbyyZ6

Like the uprights York aimed for through a blanket of fog in the game’s final seconds, it was hard to see how the Tigers would leave Gainesville with a win. Visibility for victory was low. The betting odds were against them. The scholarship numbers were against them – reports indicated LSU had just 54 available before the game, and they lost several more in warmups and in action.

But just as York trusted his work and his process without focusing on the result, the Tigers believed in what they could not see, in what they had not seen, in a faint vision somewhere in the distance.

They put 11 men on the field, and they fought like Tigers. It took grit. It took determination. Most of all, it took faith.

“Just had a little faith in God,” York added, “that he’d put me through.”

Then, after a long pause.

“It went down the middle, right?”

“I told the guys, when we beat Florida, this could be the building blocks for turning around our program, just like it did in 2017,” Orgeron said. “I think that gives our guys some confidence and building blocks. Like I said, we’re building a championship team. And we showed it tonight.”

Maybe Saturday wasn’t so unprecedented, after all.