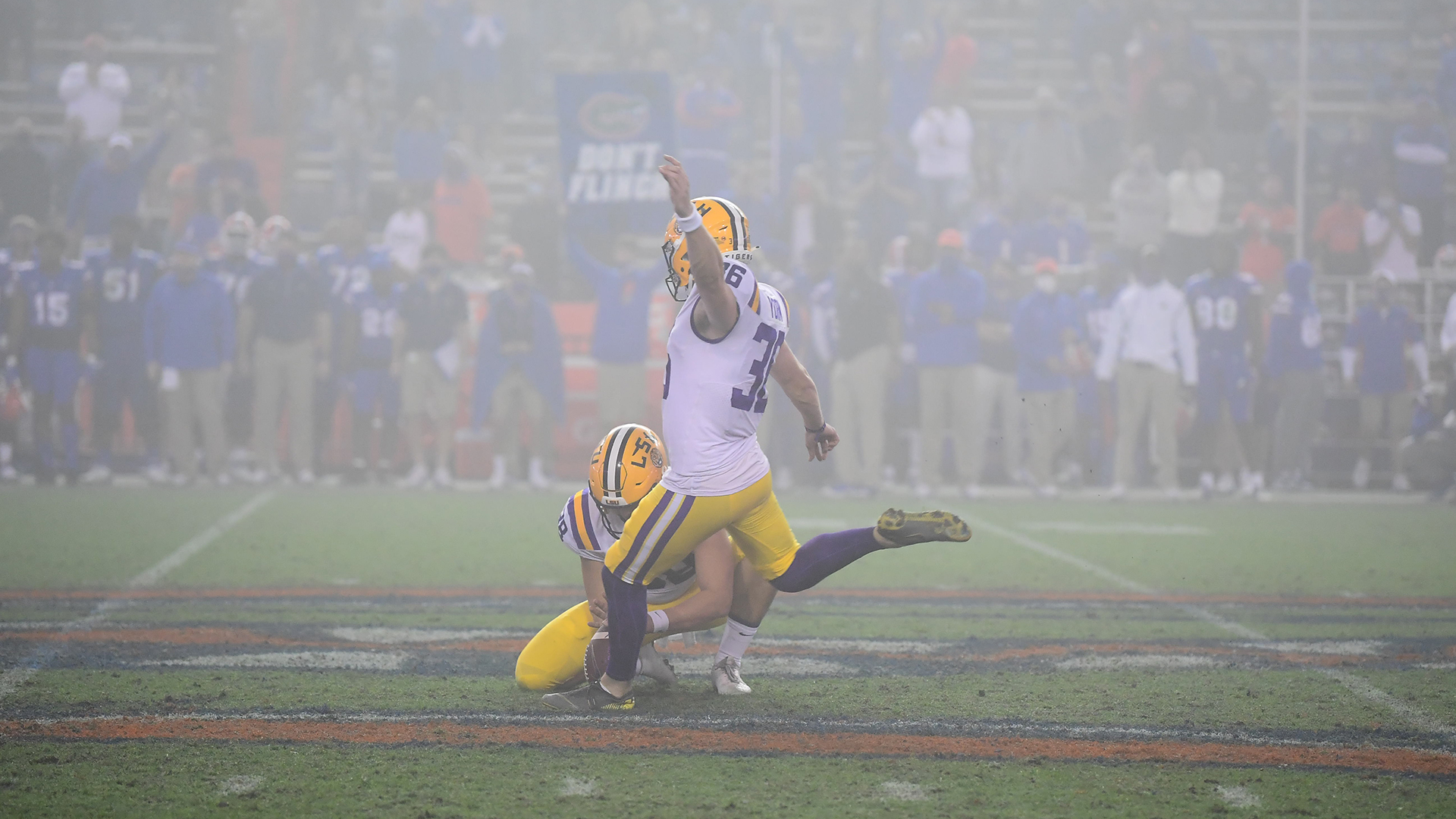 Through the adversity of a season unprecedented in its challenges and its scope, LSU fought its way through incredible adversity and the fog of The Swamp on a Saturday night.

When they made it through, they found themselves with an unforgettable win.

Cade York’s 57-yard field goal with 23 seconds left gave the Tigers a 37-34 win on the road, in a contest that saw six lead changes, over 1,000 yards of offense, and a blanket of fog thick enough to force the broadcast to change camera angles.

THE KICKER WITH THE WINNING SHOE pic.twitter.com/riJPrN3Qco

Thick as it was, it couldn’t stop York’s field goal from splitting the uprights to seal the win. Nor could it stop freshman quarterback Max Johnson, who became the first LSU quarterback to throw three touchdowns in The Swamp, completing 21-of-36 passes for 239 yards in the win. His favorite target on the night, Kayshon Boutte, caught five passes for 108 yards and a touchdown, while Chris Curry tallied 64 yards on 17 carries. Johnson added 52 yards on the ground, as well.

The LSU defense, tasked with stopping the SEC’s top offense and Heisman frontrunner Kyle Trask, also forced three turnovers and scored a touchdown to lead the way to the win. The unit started strong, beginning the game with a goal line stand. JaCoby Stevens broke up a pass on third down and teamed up with Neil Farrell for a stop on fourth down to keep Florida out of the end zone.

The Gators took advantage of the field position, however, and scored on their next possession, as Kyle Trask carried home from one yard out, capping off a five-play, 52-yard scoring drive. LSU, who started the game without Derek Stingley Jr. (injury), also lost Eli Ricks (injury) and Cordale Flott (ejection, targeting) on the Gators’ scoring sequence.

Johnson and the LSU offense responded immediately, going 75 yards on 11 plays to tie it at 7. The freshman quarterback picked up 24 yards on two runs early in the drive, aided by carries of 10, 8, and 7 yards. Facing second and goal from the Gator 5, Johnson lofted a perfectly weighted pass to Jaray Jenkins for the fourth touchdown pass of his career.

Elias Ricks gave the Tigers the lead with 12:59 to go in the first half with his second pick six of the season. On third and six from the LSU 32, the true freshman read a slant route and grabbed Trask’s ill-advised pass, returning it 68 yards for the score for his fourth interception of 2020. With the score, Ricks became the first Tiger since Ron Brooks in 2011 with two pick sixes in the same season.

LSU’s secondary answered the call again on the next series, recording one of the wildest interceptions in program history for the second forced turnover of the night. Trask’s throw to Kadarius Toney was off the mark, and Toney tipped the ball in the air while falling out of bounds. The tipped pass deflected off the face of freshman corner Dwight McGlothern and into the arms of Jay Ward, who lifted his knees from out of bounds to re-establish himself in bounds and secure the pick.

Florida responded with 10 straight points, thanks to a 23-yard field goal from Evan McPherson and a 19-yard touchdown pass from Trask to Jacob Copeland, for a 17-14 lead with 2:25 left to play in the half. But the lead was short lived, as Johnson and Kayshon Boutte answered immediately, connecting on a 34-yard touchdown reception for a 21-17 LSU lead with 33 seconds left in the half. Just two plays later, Ray Thornton sacked Trask and forced a fumble that BJ Ojulari recovered and returned to the Gator 19. The third Gator turnover of the night led to a Cade York field goal from 39 yards that gave the Tigers a 24-17 lead at the half.

The second half kick went to LSU, and the Tigers grounded and pounded their way to three more points. Cade York connected from 30 yards out to cap off a drive featuring 17 plays, 12 runs, and 63 yards. Ty Davis-Price was responisble for 30 of those yards, picking them up on five carries.

Nine Gator offensive plays later, the hosts were back in front. Trask generated consecutive scoring drives, needing just four plays on the first and five plays on the second to go 75 and 81 yards, respectively, for a 31-27 lead. His nine-yard screen pass to Toney restored the Gator lead with 3:11 left in the third quarter.

Through a thick fog that quickly descended in the Swamp, the Tigers marched with another answer. Behind Chris Curry’s tough running and Johnson’s moxy, LSU went 84 yards in nine plays, sparked by Johnson’s 41-yard completion to Boutte and finished by his four yard toss to Tre Bradford. The first career score for Bradford and Johnson’s third touchdown pass of the night put the Tigers ahead 34-31 with 13:14 remaining.

With 2:51 left, the Gators would pull even at 34 on a 31-yard field goal. After Florida drove to the LSU 12, a sack from Jacquelin Roy — his second of the night — and a pressure from BJ Ojulari forced the Gators to settle for the tie.

From there, York led the Tigers to victory, but his foot needed the help of another. On the winning drive, LSU looked set to punt after a third down stop from the Gators, but the referees flagged Florida for a personal foul after a defensive player threw Kole Taylor’s shoe down the field following the stop.

That set the stage for York, who could barely see the uprights but whose kick split them down the middle, with room to spare.

The victory pushes LSU to 4-5 on the season, while the Gators fell to 8-2.