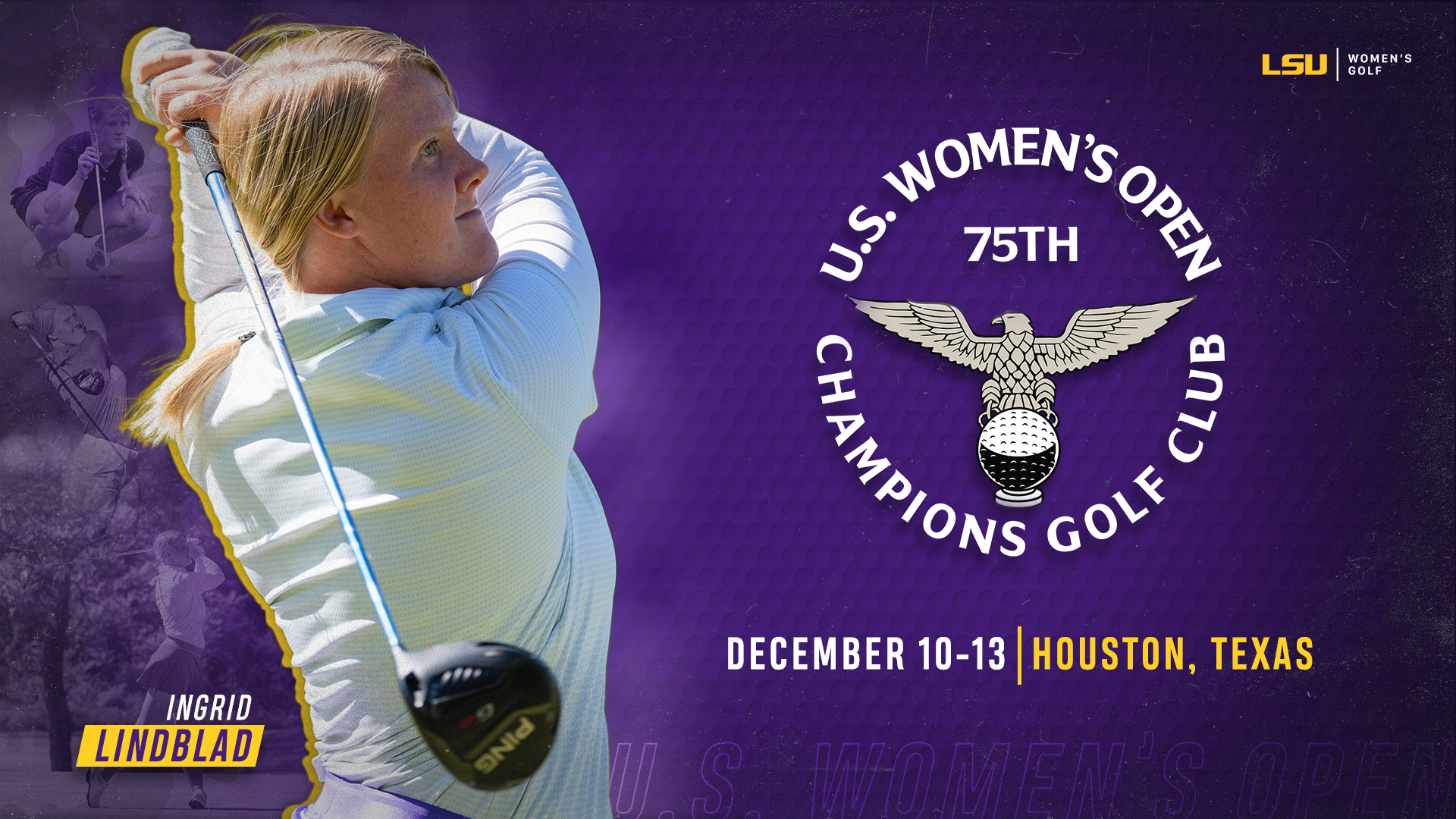 BATON ROUGE — When Ingrid Lindblad’s name is announced Thursday in Houston at the first round of the United States Women’s Open, the LSU sophomore golfer will take another step forward in building her already expanding career resume’.

No matter the results, her appearance is also another impressive step for an LSU women’s golfer. While it has been since 2002 when Shreveport’s Meredith Duncan played in the U.S. Women’s Open as an amateur, appearing in Majors seems to be about to become a regular occurrence for this blonde Swedish star who can find fairways and greens with the best in the game.

“I’m very excited,” Lindblad said in a recent media conference regarding this week’s Open at the Cypress Creek and Jackrabbit courses of the Champions Golf Club in Houston, Texas. “I played in the British Open last year and I feel I learned a lot from that. I’m more prepared than I was back then.”

Lindblad was scheduled to play in the Augusta Women’s Amateur in April of this year before that event was shut down because of the pandemic. She will get to play that in April 2021 as part of a schedule that will see her help guide the nationally-ranked women’s golf team through a spring schedule that hopefully will lead the team to an NCAA Championship appearance – another event canceled along the way earlier in 2020.

Highlighting that spring schedule will be the chance for LSU to host an NCAA regional that could advance the Tigers to the NCAA Women’s Championships.

Lindblad, winner of two events as a freshman, and her teammates have been in title contention in each of the three fall events. All were SEC-loaded fields, making the competition that much tougher as the league is packed with strong women’s golf teams and individual players.

Now comes a December women’s open, a date not normal for this event; although temperatures are supposed to be in the low 70s for Thursday’s opening round.

“She likes the cold weather,” said LSU women’s golf coach Garrett Runion. “She enjoys practicing in bad weather. Ingrid is going (to the tournament) to not just be a participant, but to compete. She knows what to expect having played in a major before. She has kind of geared her practice the last couple of weeks to what she learned in the British Open.”

Runion compared Lindblad and her second campaign at LSU recently at a televised event on The Golf Channel to Joe Burrow and his second season at LSU. Now I’m not sure there is going to be a way to add “eaux” to Lindblad’s last name at some point, but there are several qualities that Runion sees that are similar.

“(Ingrid) puts up crazy good numbers week after week,” said Runion. “Her pride and work ethic are similar to Joe’s and everything you hear about that. Her teammates love her and want to play with her. She makes everyone around her better and that is kind of hard to do in golf.”

And, Lindblad is ready to make the Women’s British Open of 2019, a learning experience for the 2020 Women’s U.S. Open and beyond.

“At the British Open we played a course that played pretty long (Woburn Golf Club), and I had a lot of five-iron, four-iron into the greens. I feel I’m hitting those shots a lot better this year than I did last year. I’ve been working on it. For the British Open, I made a Monday qualifier. I really wasn’t really prepared to play (a major).”

Runion knew he was getting someone special when Lindblad arrived from Sweden. He also saw a quality from the beginning that makes her special.

“It was just her internal drive to be better,” Runion said. “If you look across her stats, her game is pretty level. There is not one part of her game that really sticks out. But the internal drive to get better is really high and really strong. She really doesn’t give away shots. She pays attention to details around the greens. She takes her time whether it’s 40 feet or four feet. She really doesn’t make sloppy mistakes. When you add those up over the course of a tournament or over a year that extra putt she makes just pays dividends.”

But when the 2020 SEC Player and Freshman of the Year steps on the course for her opening shot, the hoopla and trappings of a major won’t be on her mind.

“You shouldn’t think of it as a special tournament,” she said. “You just have to go out and do your thing. If you don’t play your own game, you won’t get there. You can’t focus on what is outside the course.”

In the field are two other LSU stars of the past decade, Austin Ernst and Madelene Sagstrom.

Both won on the LPGA Tour in 2020, Ernst for the second time in her career. Ernst won the NCAA Championship for the Tigers in 2011 and helped LSU to back-to-back program best third-place NCAA team finishes. Since leaving LSU, she has won over $3.8 million on the tour, 92nd all-time in career money.

There is plenty of golf history at the tournament site which is a product of founders Jackie Burke Jr. and Jimmy Demaret. A year after his 1956 Masters victory, Burke opened Champions with Demaret, a three-time Masters winner. The Cypress Creek course opened in 1959 and five years later the Jackrabbit course was constructed adjacent to the Cypress Creek course.

This will be the 11th major golf event hosted at Champions, including a Ryder Cup and five renewals of the PGA Tour Championship.