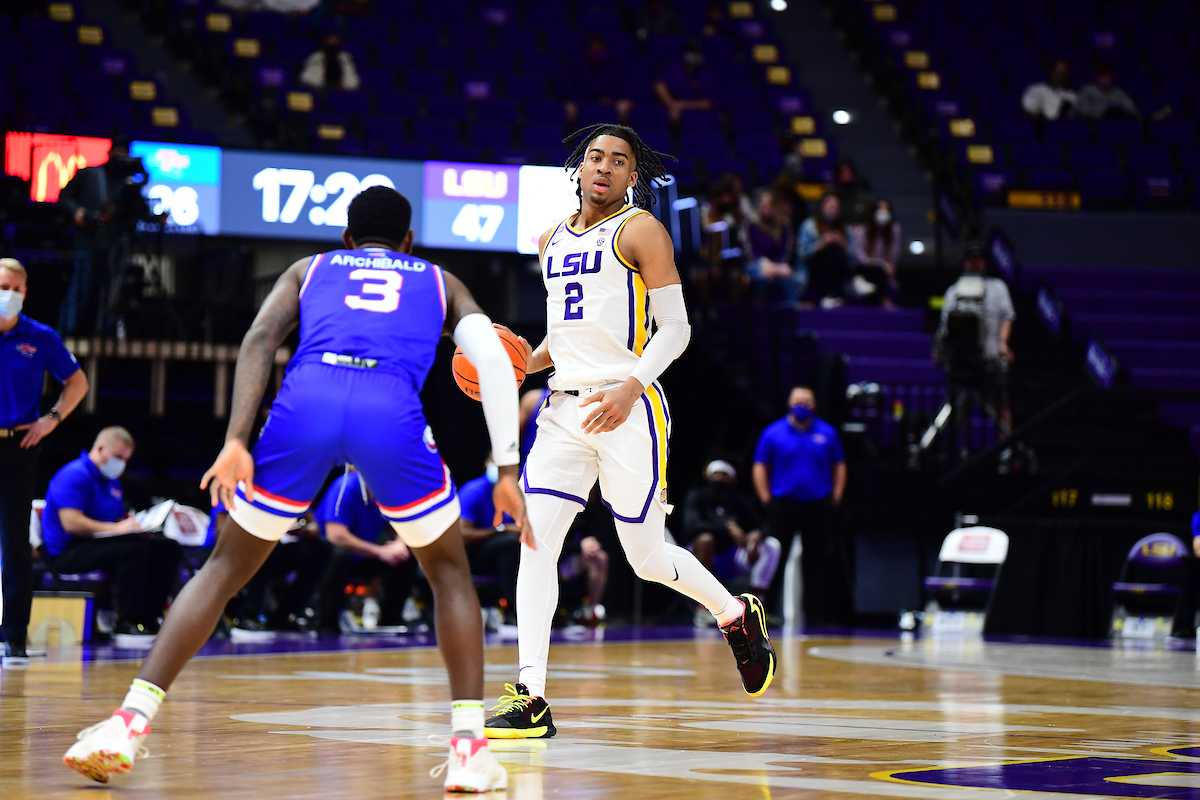 The Tigers, 3-1 on the season, outscored the Bulldogs, 43-24, in the first half and never allowed LA Tech (3-1) to get closer than 14 points in the second half before pushing their way to the final margin.

Five players were in double figures for LSU with Trendon Watford hitting 10-of-12 from the free throw line in scoring 18 points while Javonte Smart had 16 points with four treys and Cameron Thomas had 16 as well. Darius Days added 12, hitting three first half treys that helped propel LSU to the big lead, while Jalen Cook came off the bench to get 10.

Cook missed Monday night’s game with a minor injury but played 13 minutes against the Bulldogs.

Watford and Days both had eight rebounds with Smart pulled down six more.

Louisiana Tech was led by Kenneth Lofton, Jr., who powered up 17 points and pulled down 12 rebounds (six offensive).

LSU out rebounded the Bulldogs, 46-33, but Tech did have a 14-4 advantage on the offensive glass leading to 13 second chance points.

The game was close through the first five minutes and was tied at 8-8 when Days made the second and third of his back-to-back three-pointers that gave LSU a 14-8 advantage. A Days turnaround jumper made it 20-10 at the 9:34 mark of the first half and the Tigers would push it to 17 at 31-14 on a Cook three-pointers at the 5:56 mark and to 21 on a couple of Thomas free throws.

But in the next 90 seconds, LSU would get four buckets, including one from Charles Manning Jr., that would take the lead back to 22 and ended any threat by the Bulldogs.

LSU players will mix practice and semester exams this week as the Tigers get ready for the Holiday Hoopsgiving day of games at State Farm Arena in Atlanta on Saturday. LSU is scheduled to face South Florida at 1:30 p.m. CT.

Also, Coach Wade will host his weekly radio show Monday night at 7 p.m. at TJ Ribs on Acadian Thruway. The show is broadcast on the affiliates of the LSU Sports Radio Network.

“Good win. Great defensive performance by our guys. I thought we were locked in and we were communicating. We were flying around. Our presses worked. The match ups worked. Our 3-1 worked, our man. We’ve been getting better in practice. We showed up tonight. We still have to do a better job boxing out. Two is (Louisiana Tech’s Kenneth Lofton) a different type of check out. Lofton is a very good player. We have to do a better job there. Offensively, I thought we were okay. I didn’t think our offense was great. Fifteen turnovers, seven assists. They did some different things. They came and doubled us off the bounce a couple times. We have to move that ball and share that ball a little bit better. I thought we should have scored 95, 100 points. We’ll get that fixed this week. I think our defense is getting better. I think our presses are getting better. I like the way we are trending. We have had great leadership with Trendon (Watford), (Darius) Days and (Javonte) Smart. Our practices have been better. We’ve been locked in. In our scouting report last night, we were locked in. Our scouting report this morning when we did our gameday practice, we were locked in. I like where we are heading with all of that stuff.”

“We did a much better job on Ledoux. He is kind of like 24 for St. Louis who we let get loose. So, we just did a better job with our awareness on him. We just did a much better job having athleticism on him. Mwani Wilkinson makes a huge difference for us defensively. I know his stat line doesn’t jump off the page but the blocks and the plays he can make, he just took the ball from the kid the one time. He blocked a corner three. There is just some athleticism that he brings, he can make some plays defensively. You look at Jalen Cook out there. It is no secret we are better defensively, starting Mwani. We have Cook out there, he’s healthy, he’s guarding the ball. We have Charles Manning Jr. back. Our final piece is when we get (Josh) LeBlanc eligible and we can get him out there. Once we got him out there, I think we have the makings of what we want to do and need to do defensively. It’s no secret we played one of our best games defensively since we’ve been here with those three guys available for us and playing 13 plus minutes each.”

Javonte Smart:
Q: “They are obviously a team that shoots a lot of three pointers, what did you guys do defensively to limit them, and how did you guys turn that into offense”
A: “Contesting all their shots, every shot they attempted to put up just put a hand in they face and contesting they shots. Get the ball and then we was out on the break to score on the other end.

Q: “First game back with Charles (Manning Jr.), what does Charles bring that y’all didn’t have to start the season”
A: “He brings a lot of energy, he’s one of our energy guys. On the defensive, also, can knock the down the 3 ball and make plays. We was happy to get him back today, and look forward to what he bring us the next few games.

Darrius Days
Q: On him and Javonte Smarts flow on offense tonight, how having Charles back helped
A: “I’m going to touch on what Javonte said earlier, we have a lot guys that can score the ball, you know some teams might scheme on certain players. I guess tonight was my night, it was kind of on my night tonight. You know they tried to take Trendon (Watford) out and his elbow catches and take him out a little bit You know since they’re great scorers, so they got going late. You know playing with Charles again, it was me Javonte, Trendon and Cam (Thomas) in the game with Charles. The energy just picked up it was crazy. We just got stops and layups, the energy was wild and he was yelling and everything. Playing with him is a confidence boost for everybody”

Q; On lack of fouling from himself, physical shape from himself.
A: “Good Question, my eating habits off the court, you know doing what I can to not eat at certain times, Eating the right things to fuel my body. I’m not going to say I was eating bad eating before; you know I was probably eating too much of the things I was eating. That helps lots with me not fouling. You know 3 fouls tonight. The last couple games like 1, 2. You know just trying to stay on the court as long as possible. Last year I had problems, I came out of a couple games you know we may have won. Staying out of foul trouble is good in my book.”

Trendon Watford
Q: On the offense clicking tonight
A: “It’s just been a continuous thing, we come in everyday sharing the ball finding guys in their spots, finding me, finding Cam, finding Javonte. I think Days starting the game on the outside, he opened the basket a lot. He opened the basket for everyone. With that impact at the beginning, it led to a lot of driving lanes for us. Them not being to help off him as much, you know I think it was pretty good game offensive wise.”

Opening statement…
“They’ve got so many different weapons. We came in with the mindset of trying to keep them out of the paint, hoping that we would then keep them off the foul line. We could get some traps and try to keep it out of (Trendon) Watford’s hands. They got it going from three early. They really stretch you and when they do it causes you to start doing other things. That opened up the floor for them to get to the point, go to the foul line a lot and they just really steamrolled from there.”

On LSU’s seven first half three pointers…
“The matchups were so unique for us. We were trading twos for threes for a while. (Kenneth Lofton) Junior got it going inside, but then they were hitting threes on the other end. We kept trying to find different ways. Ultimately, we struggled offensively. Give them some credit. They mix up their defenses. Their length is so different than what we’re used to at all positions. Their versatility and the way they switch, the matchups and different things they do, I thought we got rushed. When we were missing shots it put us in a spot where each defensive possession, it thought we were almost trying too hard and we would be over aggressive and foul or miss an assignment and give them some easy baskets.”