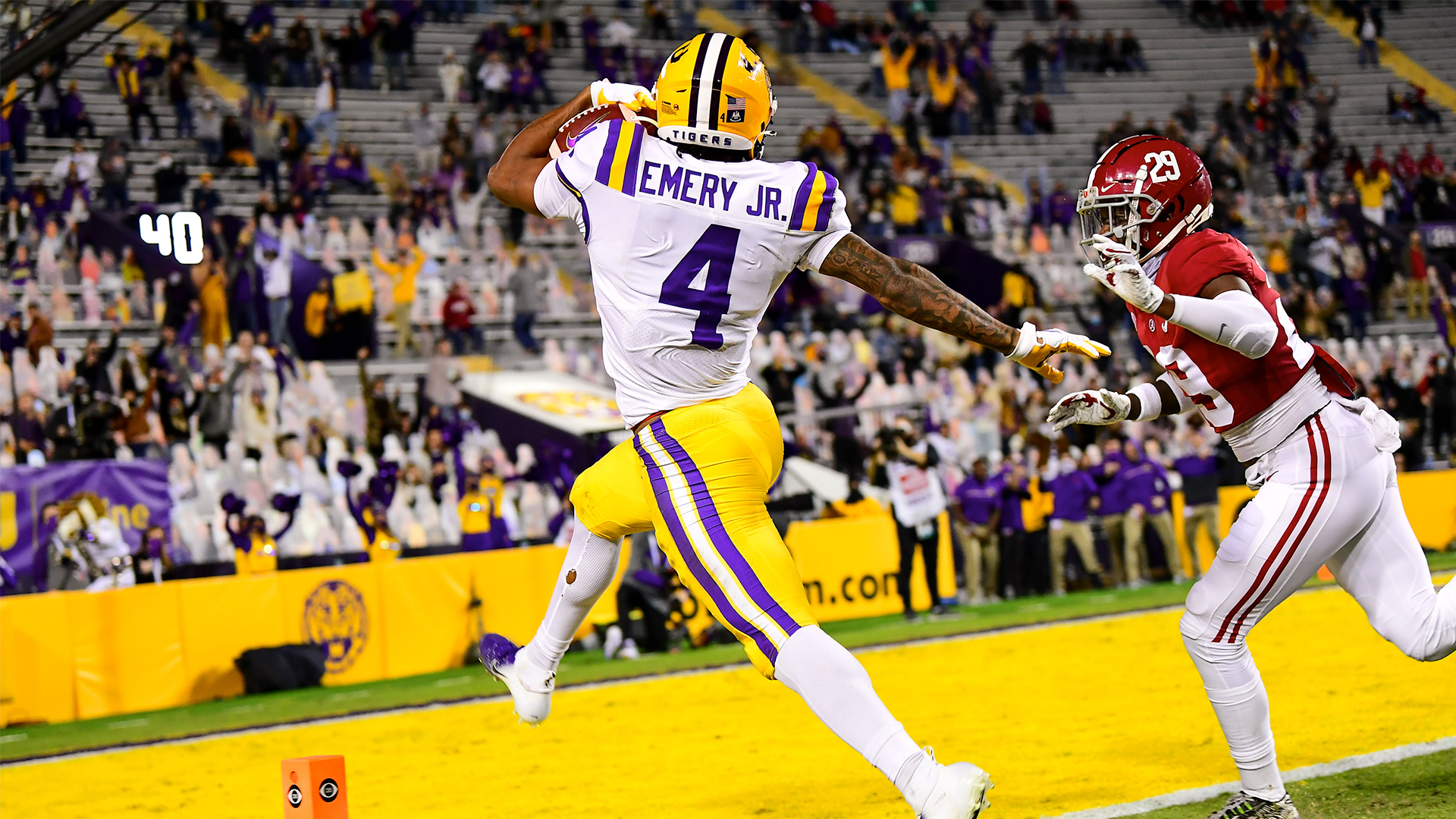 BATON ROUGE — Top-ranked Alabama opened a 21-0 lead in the opening quarter to defeat LSU on Saturday night in Tiger Stadium, 55-17.

LSU (3-5) returns to action on Saturday, Dec. 12, when the Tigers travel to Gainesville to face No. 5-ranked Florida. Game time and television network for the contest is expected to be announced on Sunday.

After being stopped on a fourth-down try on its first drive, the Tigers scored two second-quarter touchdowns on a 44-yard reception by freshman wide receiver Kayshon Boutte – though he dropped the ball short of the end zone. The ball rolled over the line where LSU’s Jontre Kirklin picked it up and was credited with the touchdown. Less than three minutes later, running back John Emery Jr. ran a career-long 54 yards for a touchdown.

Big plays by Alabama’s DeVonta Smith were too much for the Tigers to overcome, as the senior wide receiver caught eight passes for 231 yards including touchdowns of 65, 61 and 20 yards.

Offensively, both true freshman quarterbacks saw action for LSU. TJ Finley started and completed 14-of-28 passes for 144 yards including the touchdown pass to Boutte, who caught eight passes for 111 yards. Max Johnson entered in the third quarter and completed 11-of-17 passes for 110 yards. Emery’s big run helped him lead LSU with 79 yards on seven carries. Cade York improved to 8-of-10 in his career on field goals beyond 50 yards, as he made a 52-yarder in the third quarter.

Saturday’s contest was originally scheduled for Nov. 14 but was moved due to LSU’s limited number of players available (COVID-19 contact tracing). Tiger Stadium’s announced attendance was 22,349, as capacity was limited to 25 percent.

Alabama took the opening kickoff and moved 75 yards in seven plays, with the scoring drive culminating in a 14-yard touchdown run by Najee Harris. The Crimson Tide led 7-0 with 11:56 remaining in the first period.

LSU responded by driving to the Alabama 15-yard line on its first offensive possession, but the Crimson Tide stopped running back Tyrion Davis-Price short of a first down on a fourth-and-one carry.

Alabama then drove 85 yards in five plays, and Harris gave the Crimson Tide a 14-0 lead on a one-yard burst with 5:50 remaining in the first quarter. Harris was initially ruled to have fumbled into the end zone for a touchback, but replay review determined that he crossed the goal line prior to losing the football.

After a three-and-out by the LSU offense, Alabama increased the advantage to 21-0 at the 2:27 mark of the period when quarterback Mac Jones connected with tight end Jahleel Billingsley on a 24-yard touchdown pass, capping a five-play, 47-yard march.

The Tigers got on the scoreboard on the first play of the second quarter when quarterback TJ Finley threw a 44-yard pass to wide receiver Kayshon Boutte, who fumbled at the one-yard line, but wide receiver Jontre Kirklin recovered the ball in the end zone for a touchdown. The scoring drive covered 95 yards in nine plays, and the Tigers trailed 21-7 with 14:53 remaining in the second quarter.

But Alabama recovered quickly, as Jones hit wide receiver DeVonta Smith with a 65-yard TD strike, widening the Tide’s lead to 28-7 with 13:36 remaining before halftime.

LSU narrowed the deficit to 28-14 on its next possession, as running back John Emery Jr. dashed 54 yards to paydirt, culminating a 69-yard, three-play drive.

Alabama again retaliated in a hurry, as Jones lofted a 61-yard scoring pass to Smith down the sideline, and the Tide led 35-14 at the 11:14 mark of the second period.

After an LSU punt, the Tide added a touchdown just before intermission, as Smith made a leaping, one-handed grab of a 20-yard pass from Jones, giving Alabama a 45-14 lead after a six-play, 58-yard possession.

The Tigers created the first turnover of the game at the 8:24 mark of the third quarter when LSU cornerback Jay Ward stripped the ball from wide receiver Slade Bolden, and Derek Stingley Jr. recovered the fumble at the Tigers’ 26.

Alabama, however, regained possession on the ensuing drive when linebacker Christopher Allen took the ball from tight end Arik Gilbert after a reception, giving the Tide a first down at the LSU 34.

The Tide capitalized on the opportunity, as Harris sprinted into the end zone on an 11-yard carry and Alabama led 52-14 at the 3:39 mark of the third period.

LSU quarterback Max Johnson engineered a 10-play, 41-yard drive that ended in a 52-yard field goal by Cade York, reducing the deficit to 52-17 with 31 seconds left in the third quarter.

After recovering an LSU onside kick, Alabama answered with a field goal drive of its own, as the Tide moved 29 yards on 10 plays before Reichard nailed a 34-yard three-pointer with 10:50 remaining in the contest.

With Johnson under center, LSU marched to the Alabama 1-yard line but three plays were unsuccessful including a fourth-down toss Gilbert wasn’t unable to reel in with one hand.

Alabama took over at its 1 with 4:43 to play and ran out the clock.