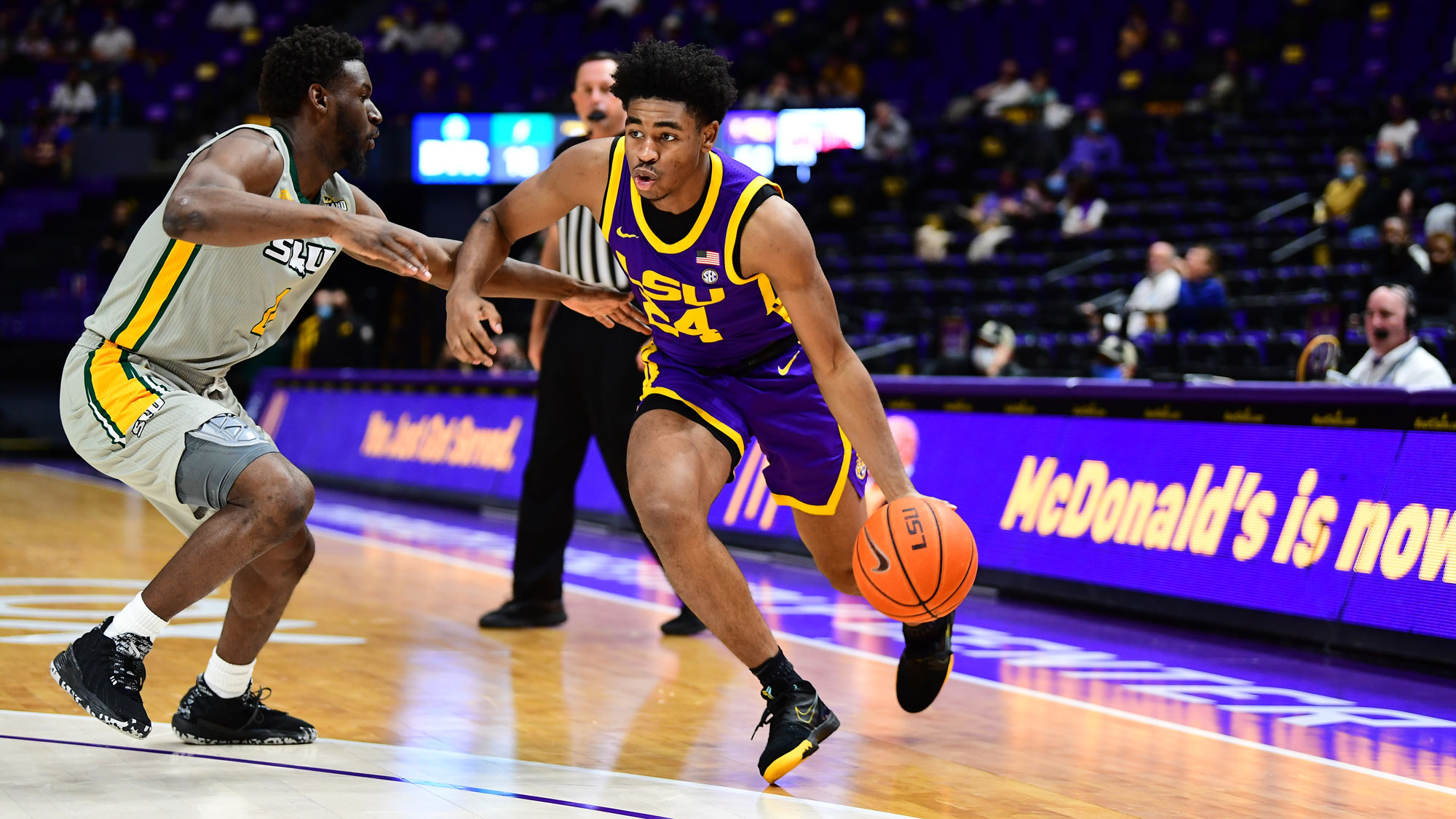 BATON ROUGE – The LSU Men’s Basketball team opened its 2020-21 home slate with a dominant 96-43 victory over Southeastern Louisiana on Monday night at the Maravich Center.

Worsham: The Stops Start and the Points Persist for Tigers in PMAC Return

Freshman Cameron Thomas led LSU in scoring for the third time in as many games, tallying 21 points including 9-of-10 free throws. Trendon Watford was close behind with 20 points on 7-of-8 shooting with nine rebounds and three assists.

The Tigers built a 32-point halftime advantage and never looked back.

LSU returns to action on Sunday, Dec. 6, when Louisiana Tech visits the Maravich Center. Tipoff is set for 5 p.m. CT on the SEC Network and the LSU Sports Radio Network.

LSU used an 18-2 start to get going in the game and scored 50 points in the first half. LSU never let Southeastern back in the game, leading by 54 in the final 2:31 of the game.

LSU played 12 players with nine scoring as joining Watford and Thomas in double figures was Mwani Wilkinson with 12 points (and a strong five offensive rebounds which drew praise from Coach Will Wade in his postgame). Darius Days added 11 points and Javonte Smart 10.

Southeastern was led by Keon Clergeot with 17 points while Joe Kasperzyk had 13.

Both Watford and O’Neal had nine rebounds to lead LSU while Days had seven.

Freshman Josh Gray saw his first action of the season and scored four points in eight minutes of play.

Thomas, the SEC Freshman of the Week, hit 4-of-10 shots, all three-pointers and a very strong 9-of-10 at the free throw line.
—

“Playing with older guys is an advantage, playing with Javonte Smart, Darius Days, and Trendon Watford. They look for me and they give me easy shots.”

On first game in the PMAC…

“No butterflies for me, I’m pretty much built for this. Of course it’s pretty different not having the full crowd, but it was pretty cool playing our first game and it should be better throughout the year.”

On scoring at all levels…

“You can’t be one dimensional, if one part of your game is not going you gotta do other things… I have to score for us to win and for us to compete, so I have to do whatever it takes to score the ball.”

On improvement on three-point shooting …

“I’ve just been working on it a lot. Waking up at 9:00, 10:00 in the morning … getting 200 makes in in the morning and getting shots up after practice. It’s good seeing all the work paying off, but I’m just focused on getting better every day because I know I gotta be able to shoot the ball. That was one of my biggest things coming back for year two, just to focus in on that, and I think I’m doing a pretty good job of improving it, and I’m just gonna keep doing that.”

“Our communication is definitely getting better, I think we’ve been locking in on that. That’s a big part on defense is being able to communicate, so this year that’s one of the biggest things we’ve wanted to do, we lock in every day… in St Louis we felt like we could’ve done better on defense. We gave up 80 points both games so we wanted to come out, focus in and try to keep them under 40.

On developing his spin move…

“I’ve just been working on that, just getting quicker, getting stronger, getting faster. The spin move is obviously one of my favorite moves, me being taller, I can spin and shoot over smaller people. Maybe one day I can get it as good as Skylar Mays.