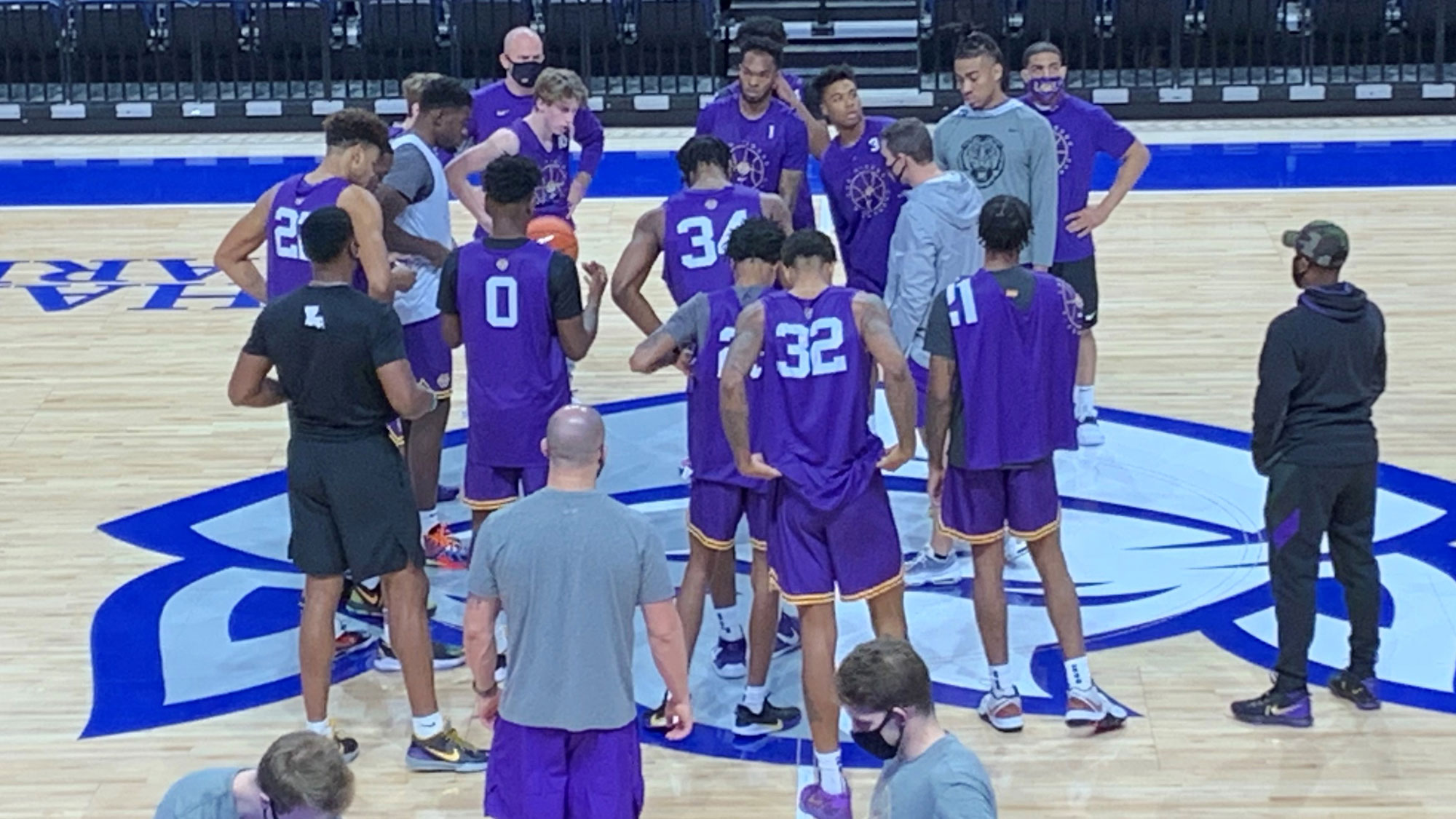 ST. LOUIS, Missouri – The LSU Tigers will open the 2020-21 men’s basketball season Thursday at 6 p.m. against the SIU-Edwardsville Cougars at Chaifetz Arena on the Saint Louis University campus as part of the hastily scheduled Billiken Classic.

Patrick Wright and former LSU Head Coach John Brady will have the game on the LSU Sports Radio Network (Eagle 98.1 FM flagship in Baton Rouge) and the game will be streamed on the ESPN+ subscription service.

The Tigers went through about a 95-minute workout at Chaifetz late Wednesday morning working on their offensive sets in 5-0 drills and defensive plays in 5-of-5 drills.

The starting lineup remains in a little flux going into the opener but it is almost assured that the three veterans on this squad – junior guard Javonte Smart, sophomore forward Trendon Watford and junior forward Darius Days – will have their named called in the starting lineup.

Players like Cam Thomas, Jalen Cook, Bryan Penn-Johnson and Aundre Hyatt would have to considered among those that might be in the lineup when all is said and done. Coach Will Wade said in his last press session that he would be comfortable right now with 10 players in his main rotation.

“We’re excited to get going, excited to have some games, our guys have done a great job with our preparation,” said the fourth-year head coach.

“We feel good about them and I like our versatility, I like the way we shoot the ball. We shoot the ball extremely well, we share the ball on offense. Our turnovers are way down in practice, I’m hopeful about that,” Wade said. “Our defense is improving so I think we add all that together and we have a good-looking squad. As of today, we’ve got 10 guys that we can put in the game and I feel very, very good about them.”

Smart averaged 12.5 points, 3.5 rebound and 4.2 assists per game last season, while Watford, who earned All-SEC Freshman honors a year ago finished with 13.6 points and 7.2 rebounds a contest. Days finished with 11.1 points per game and 9.8 rebounds per game.

LSU, 21-10 last season and second in the SEC at 12-6, has won 49 games overall and 28 in the SEC in the last two seasons. The Tigers were scheduled to play in the Golden Window Classic in Lincoln, Nebraska but in a very fluid early season across the college basketball season, Saint Louis withdrew and decided to have their own event and LSU was invited as well.

SIUE, 8-23 a season ago under first year coach Brian Barone, opened the Billiken Classic on Wednesday night against Saint Louis.

Junior Cam Williams is the Cougars’ leading returning scorer. He was third on the team in minutes per game at 24.2. Senior Mike Adewunmi paced SIUE in rebounds, averaging 5.1 per game and 8.2 points per game. The Cougars lost 11 games by 10 or fewer points, six of those five or less. Like LSU, the SIUE roster has a lot of newcomers including transfer Sidney Wilson from UConn who was a top 75 recruit out of high school, and Courtney Carter, who was a National Junior College Player of the Year.

Saint Louis and LSU will meet in a Saturday game at 2 p.m. No fans will be admitted to any of the games of the Billiken Classic.

LSU’s home opener is set for Monday night at 7 p.m. against Southeastern Louisiana.