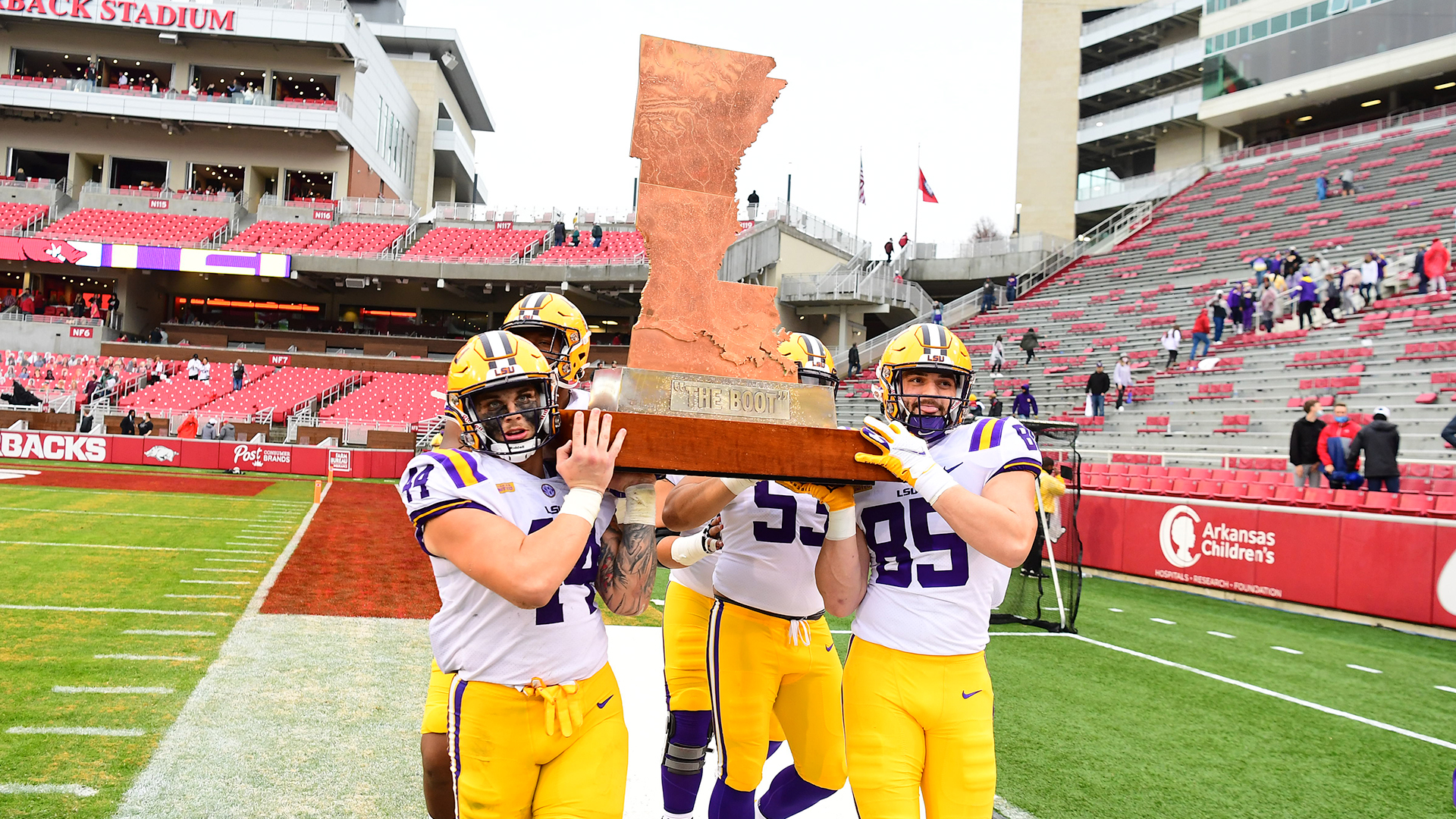 FAYETTEVILLE, Ark. — LSU freshman quarterback TJ Finley connected with Jaray Jenkins for a 13-yard touchdown with less than four minutes to play, and Jay Ward blocked a potential game-tying field goal with 84 second to play to give the Tigers a 27-24 victory over Arkansas on a rainy Saturday in Fayetteville, Ark.

Finley, who started for the third-straight game in place of an injured Myles Brennan, finished 27-of-42 passing for 271 yards with two touchdowns and no interception. LSU running back Tyrion Davis-Price ran a career-high 24 times for 104 yards and with a 1-yard touchdown run that was setup by linebacker Jabril Cox’ 36-yard interception return in the second quarter.

Head coach Ed Orgeron improved to 5-0 against Arkansas and 13-0 in games following a loss at LSU. His defense forced seven drives of three-or-fewer plays, while the Tigers offense dominated time of possession at 41:43. LSU converted 12-of-23 third downs while Arkansas was 0-for-10.

Arkansas (3-5) took a 21-20 lead late in the third quarter. However, an LSU defense playing the final quarter without starting cornerbacks Derek Stingley Jr. (injury) and Eli Ricks (targeting ejection) gave the Tigers a chance for their first fourth-quarter comeback victory since Cole Tracy’s walk-off field goal at Auburn in 2018.

Razorbacks’ quarterback Feleipe Franks used big gains to amass 339 passing yards on 17-of-26 passing with a touchdown and an interception. Mike Woods led the way with four catches for 140 yards, while Treylon Burks added five receptions, 90 yards and a 65-yard touchdown. Franks was the Hogs leading rusher with 43 net yards on 14 carries including a 10-yard touchdown run just before halftime.

LSU is next scheduled to face Texas A&M at 6 p.m. CT on Nov. 28 in Bryan-College Station, Texas. The game will be televised by ESPN and broadcast by the LSU Sports Radio Network beginning at 4 p.m. CT.

LSU won the coin toss and deferred its decision until the second half. The Tigers kicked off to the Razorbacks to open the game, as pregame rain subsided in the hours prior to kickoff.

The game started with three-straight punts, as each team managed one first down in the opening minutes of the game. LSU scraped across the first points of the contest with a 49-yard field goal by Cade York to take a 3-0 lead at the 7:37 mark of the first quarter. An 18-yard catch by Jaray Jenkins and a 30-yard catch-and-run by Terrance Marshall Jr. on third-and-4 that moved the Tigers across midfield. However, Jenkins was unable to haul in a third-down pass from Finley inside the Arkansas 5-yard line. York’s kick moved the Tigers sophomore placekicker over 200 points for his career, good for seventh in scoring by a kicker in LSU history.

Consecutive three-and-out drives put the Razorbacks on the field for a 92-yard drive that required on four plays. After passes of 13 and 9 yards by Franks, the Hogs quarterback connected with Treylon Burks for a 65-yard catch to give Arkansas a 7-3 lead with 3:40 left in the quarter.

LSU, which ran for 100 yards in the first half, used its running game to answer the Arkansas score. After opening the drive with five-straight runs for 39 yards by Davis-Price, Finley completed a 5-yard pass to freshman tight end Arik Gilbert on fourth-and-3 to keep the drive alive at the Arkansas 30. Two plays later, Finley connected with wide receiver Racey McMath behind a defender for a 30-yard touchdown that put the Tigers ahead 10-7 with 13:54 remaining in the half.

Following another three-and-out forced by the LSU defense, LSU looked to add to its lead. However, after moving across midfield methodically in eight plays, Terrance Marshall Jr. was stripped of the ball while fighting for yardage after a 20-yard catch. Arkansas’s Myles Slusher recovered at the Hogs’ 29.

Consecutive punts ensued before LSU linebacker Jabril Cox intercepted Franks at the Arkansas 37 and returned to the 1-yard line. With 4:21 left in the half, LSU’s Davis-Price turned the defensive effort into points with a touchdown run. LSU led 17-7.

With LSU freshman cornerback Eli Ricks disqualified for targeting, Franks struck back quickly. A 50-yard pass to Mike Woods setup the quarterback’s 10-yard touchdown run. A 37-second drive cut LSU’s advantage to 17-14 with 3:44 left in the half.

In its four-minute offense, LSU put together a 14-play drive that stalled at the Arkansas 6-yard line. York converted a 24-yard field goal to extend LSU’s advantage to 20-14 as the half ended.

LSU controlled the ball for more than 10 minutes in the third quarter but was unable to add to its advantage. Arkansas, which went three-and-out on its first second-half possession, needed only six plays to drive 95 yards and take a 21-20 lead.

Without its top two cornerbacks on the field, LSU allowed completions of 29 and 50 yards to Woods, setting up a 1-yard touchdown run by Trelon Smith. With 1:04 left in the quarter, Arkansas led 21-20.

After three LSU passes managed only six yards, punter Zach Von Rosenberg used a 60-yard punt to pin Arkansas at its 8. However, Franks again attacked the Tigers backup corners and completed a 51-yard pass to TJ Hammonds to the LSU 41. After flipping the field for the final quarter, Hammonds took a handoff for 29 yards to the LSU 6-yard line.

On third-and-goal from the LSU 2 during a pouring rain, Franks faked a handoff and looked to run but slipped at the 5-yard line. After a seven-play, 88-yard drive, the Razorbacks added a 22-yard field goal by AJ Reed to push the advantage to 24-20 with 12:42 to play in the game.

As the rain continued, LSU earned a first down with a 19-yard catch by Jontre Kirklin and looked to be in scoring position after another 35-yard grab by the LSU wide receiver. However, a holding penalty called the play back. Von Rosenberg punted for 48-yards on fourth-and-9 to the Arkansas 7.

With 9:20 to play, Franks reached toward the first down at the 16-yard line but came up short on third-and-2. Though initially measured and declared a first down, the play was spot was corrected after video review showed Franks’ elbow down while a yard short of the line to gain.

With 7:30 left in the contest, LSU took over at its 33. On the second play of the drive, Finley found Kayshon Boutte over the middle for a 15-yard reception at the LSU 48. Arkansas’s Jalen Catalon was penalized for targeting on the tackle and disqualified, moving the Tigers to the Arkansas 36.  On first-and-10 from the Arkansas 25, Davis-Price caught the ball at the Hogs 1 and appeared to take two steps into the end zone before losing control of the ball. However, the play was ruled incomplete on the field and confirmed after video review.

On third-and-goal from the 13, Finley had plenty of time in the pocket against a three-man rush, waited and found Jenkins alone in the end zone for a touchdown. York’s PAT gave LSU a 27-24 lead with 3:59 to play.

Arkansas overcame penalty and first-and-22 with completions of of 12 and 15 yards for a first down to the 40. Franks then overcame a sack by LSU’s Andre Anthony by running for 13 yards and completing fourth-and-3 pass to Smith for 7 yards to the LSU 46.

On another fourth-and-3 from the LSU 27, Arkansas tried to tie the game with a 44-yard field goal by Reed, however, LSU’s Jay Ward came off the right end to get a piece of the kick which was on the right line but came up short.