Tigers Down No. 14 Ole Miss in Overtime at SEC Tournament 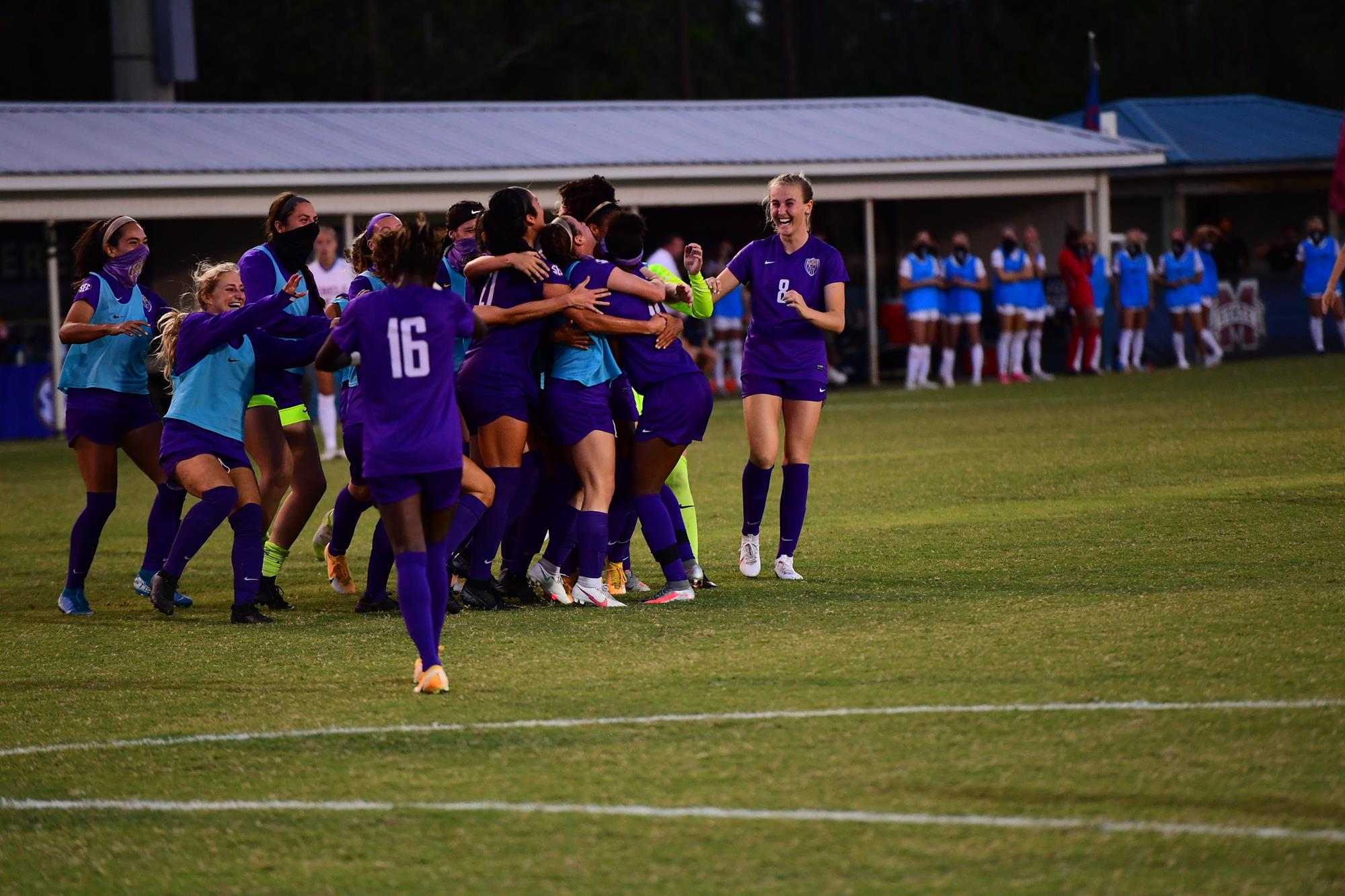 Orange Beach, Ala. – Redshirt junior Tinaya Alexander’s brace saw the LSU soccer team defeat the Ole Miss Rebels by a score of 2-1 after extra time in the second round of the SEC Tournament on Sunday afternoon at the Orange Beach Sportsplex. Alexander scored a calm and collected finish from twelve yards out in the 32nd minute to put LSU 1-0 ahead before Ole Miss equalized in the 44th minute with a rocket from Madisyn Pezzino. Alexander played the role of hero in extra time, scoring the golden goal with seconds left in the first period with a tight finish inside the six yard box.

The win is the second of the season for LSU, and with the win the Tigers advance to the quarterfinals of the SEC Tournament.

“We’re really proud of the girls and their effort,” head coach Sian Hudson said. “We built up confidence with the first round win on Friday night and that reflected on how we played today. We played through our lines really well and possessed the ball well, as well as having outshot the opponent today. The team’s confidence is building.”

Both teams had chances to start the match. In the third minute, Ole Miss’ Channing Foster sent a first time shot on goal that saw sophomore goalkeeper Mollee Swift called into action for the first time on the afternoon. LSU responded with a chance of its own in the eighth minute when freshman Taylor Dobles dispossessed a Rebel defender in the box to get a one-on-one shot on goal that was saved by Ole Miss goalkeeper Ashley Orkus. The Tigers were active once again in the 25th minute when junior Meghan Johnson found herself 12 yards out on the end of a miscleared ball from an LSU corner and sent in a strong first time shot that was goal bound until it was cleared away by a Rebel defender.

LSU took a 1-0 lead in the 32nd minute after a goal from Alexander. Alexander picked up the ball near the halfway line and charged into the box before shrugging off an Ole Miss defender and lifting the ball with her left foot from 15 yards out to beat the onrushing goalkeeper. The goal was Alexander’s fourth of the season, and third consecutive game with a point.

Ole Miss found an equalizer late in the first half with two minutes to go. Pezzino received the ball from twelve yards out and was able to turn and send a shot into the bottom right corner to make it 1-1.

The second half saw both teams defending with discipline and preventing clear cut chances early on. In the 59th minute, Swift collected her fourth save of the match after stopping a powerful long shot by Mo O’Connor. The Tigers were awarded a penalty in the 66th minute after a handball in the Ole Miss box was called. Junior Reese Moffatt’s strong penalty shot to the right was saved by Orkus, and the score line remained tied.

The final ten minutes of regulation saw both teams have a big chance that came up short. Redshirt senior Courtney Henderson found herself on the end of a free kick in the 80th minute, with her header from eight yards out going wide left of the goal. Ole Miss had the final chance of regular time in the 86th minute. Haleigh Stackpole’s shot from the top of the box was headed into the net until Swift pulled an acrobatic save to tip the shot over the bar and out for a corner.

The first period of overtime began and Swift was once again crucial in keeping the score even. Two minutes into the period, Ole Miss’ Ramsey Davis pounced on a low driven cross to send a ground shot on goal that required Swift to fully extend to parry wide. Seconds later on the ensuing corner, Swift denied a header from O’Connor to register her eighth and final save of the match.

“Mollee had some fantastic saves for us today,” Hudson said. “She’s been a phenomenal player for in recent weeks.”

The winner came in the final seconds of the first period. Johnson rushed down the right hand side and was able to send a ground cross into the six yard box that was tucked into goal by Alexander. The goal was Alexander’s fifth of the season, and Johnson’s third assist on the year. Alexander’s brace was her second of the season, with the first coming in the 3-3 draw in the regular season versus Alabama.

“We’re pleased with the team’s performance today and we’re looking forward to the quarterfinal match against Texas A&M.”