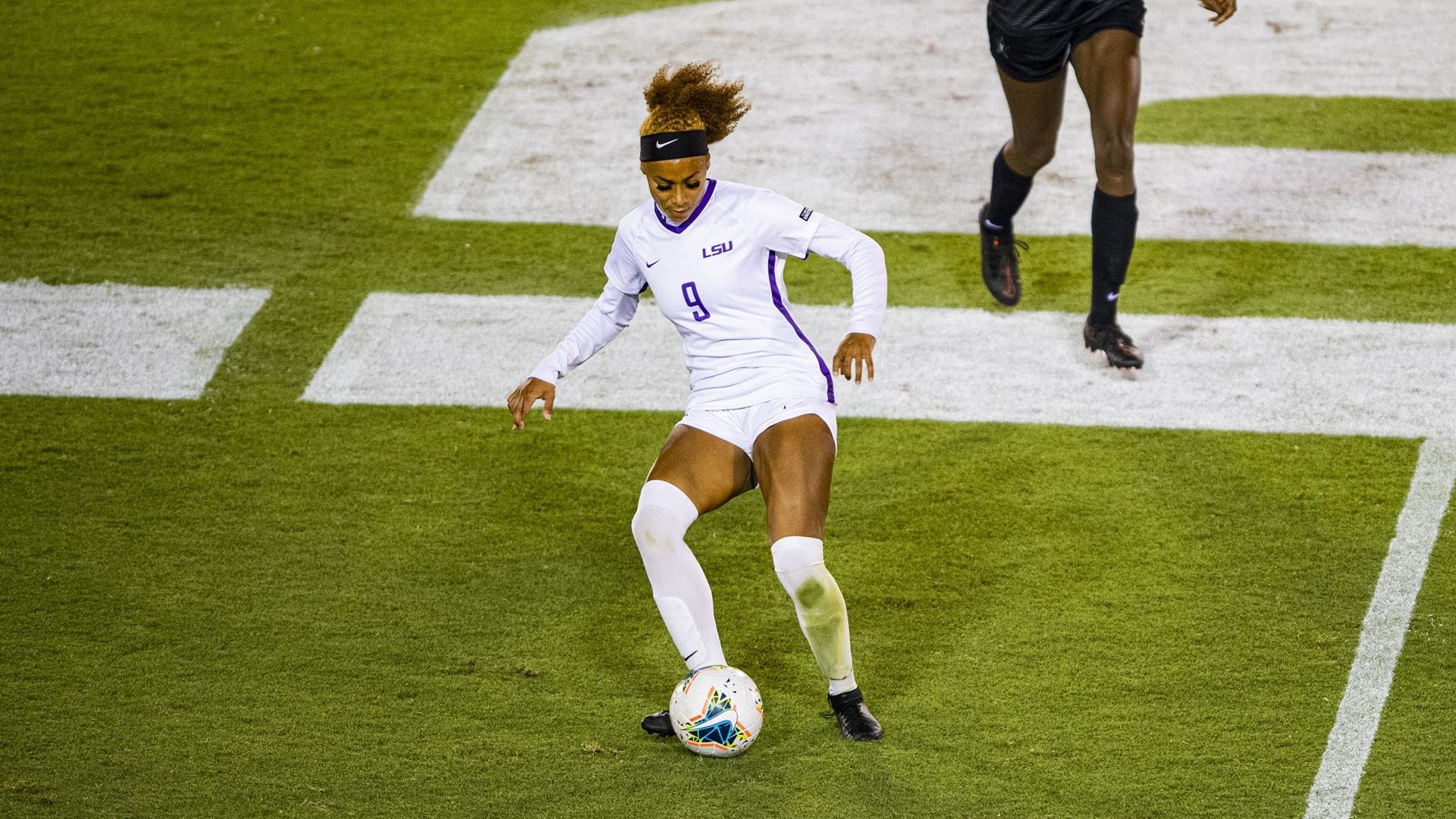 Baton Rouge, La. – LSU soccer will open up the 2020 SEC Tournament with a matchup against 11th seeded Alabama on Friday night in Orange Beach, Alabama. The game will take place at the Orange Beach Sportsplex and be aired on the SEC Network with first kick slated for 6 p.m. CT.

This will be LSU’s 15th appearance at the SEC Tournament. The Tigers hold an all-time record of 9-10-6 in their 25 matches played at the conference tournament. LSU’s last trip to Orange Beach in 2018 saw the Tigers get four results in eight days to claim LSU’s first ever SEC Tournament title. LSU was the first team to win the SEC title after playing in the opening round since the tournament expanded in 2012.

Alabama holds the all-time advantage in the series with 12 wins in the 26 contests played. LSU has won eight matches and six have ended in a draw. LSU has had the upper hand as of late going 7-3-5 in the last 15 matches dating back to 2006. Eight of the last 11 matches between the two schools have gone past regulation and ended in overtime. This will be the first time LSU and Alabama have ever met at the SEC Tournament.

The two squads met just three weeks ago on October 23 in Baton Rouge at LSU Soccer Stadium. The two teams battled to a 3-3 draw in wet conditions. Alabama took and early 2-0 lead before Tinaya Alexander answered with LSU’s first goal of the match. Alabama responded with another goal to make it 3-1, but less than a minute later Alexander picked up the second brace of her collegiate career to bring the Tigers within one. Molly Thompson found the equalizer for the Tigers in the 77th minute and the game ended in a 3-3- draw after 110 minutes of play.

Tinaya Alexander owns the team lead with six points coming from her three goals scored this season. She had a brace against Alabama on Oct. 23 and scored her third goal of the season last Friday against No. 8 Texas A&M. Redshirt freshman Taylor Dobles ranks No. 2 on the team in points registered with four; she has one goal versus Missouri and then two assists coming against Mississippi State and Alabama. Dobles’ goal and two assists came in a three-match stretch during October.

Dobles and junior midfielder Meghan Johnson have two assists apiece to lead the squad. Johnson assisted Dobles’ first career goal against Missouri and followed that up with another assist a week later against Alabama setting up Alexander’s first goal in that game.

LSU has six goals on the season – Alexander (3), Dobles (1), Molly Thompson (1), and Rammie Noel (1). Thompson and Alexander are tied for the most goals of any current LSU player with six apiece. Other assists this season have been credited to Wasila Diwura-Soale, Maddie Moreau and Lauren Robles, all three of which were the first of their careers.

Mollee Swift has started seven of eight matches for LSU in goal. She has played 673 minutes and has a goals against average of 1.60. She’s made 29 saves thus far; her season high for saves in a match is seven, and that has happened twice (vs. Arkansas, vs. Texas A&M).

Chiara Ritchie-Williams and Maddie Moreau are serving as team captains this fall. Ritchie-Williams is the most experienced player on the squad and she is showing how valuable she is with a position change this season to the midfield. In her first three seasons, Ritchie-Williams anchored the backline for LSU at the centerback position, but for her senior season she has moved up to the midfield and will play a major role in LSU’s success. She has played in 66 career matches, starting 63 of those, and logged a total of 6,038 minutes. Moreau has played at leftback during her two seasons at LSU. She’s scored one career goal, registered her first career assist against Mississippi State (Oct. 11), and has played a total of 2,319 minutes out of possible 2,463 minutes in 25 career matches.

Redshirt junior Tinaya Alexander collected the second brace of her career in LSU’s Oct. 23 match against Alabama. She scored the first two goals in the match for LSU that resulted in the Tigers earning a point in a 3-3 draw. The most recent brace was her first registered against an SEC opponent as her first one came during her freshman campaign in 2017 against Mississippi Valley State University.

The redshirt junior notched her third score of the season last Friday at Texas A&M. Wasila Diwura-Soale stuck with the play and crossed in a well-placed ball from the right side of the box that Alexander headed home from seven yards out. Alexander is the team leader in points (6) with three goals on the season. Her 0.50 goals per game ranks No. 4 in the SEC. She has six career goals and 13 assists for a career point total of 25.

Taylor Dobles scored her first career goal in LSU’s 1-1 draw at Missouri on Oct. 16. It came in the 38th minute off an impressive counter attack by the Tigers. Meghan Johnson, a junior, started the play with the ball in LSU’s side. She possessed the ball up the pitch for nearly 70 yards before playing Dobles in to the left side of the box. Dobles cleared her defender and beat the keeper to give LSU a 1-0 lead in the first half.

The redshirt freshman ranks second for LSU with four points on the season (one goal, two assists). She registered her first-career assist on Oct. 11 at Mississippi State, scored her first career goal on Oct. 16 against Missouri, and registered an assist in LSU’s Oct. 23 match against Alabama.

Noel has been a problem for all eight opponents LSU has faced this season. She’s beat defenders off the dribble, she’s set up teammates with good looks, and has provided great energy for the LSU squad. Noel has two career goals and one assist to her name. Both goals have been scored against Mississippi State and her lone assist came in 2019 against Kentucky.

Sophomore transfer Mollee Swift has now played seven matches in net for the Tigers since arriving in Baton Rouge. The sophomore has collected 29 saves and is allowing 1.60 goals per game with a save percentage of .707. Her two best saves of the season came against Missouri, including a leaping, game-saving save in the second overtime of that match.

Molly Thompson is tied for the LSU lead alongside Tinaya Alexander in career goals scored with six. Her first goal of the 2020 season came on Oct. 23 against Alabama in the 77th minute to level the match at 3-3. She now has six career goals; three from her freshman season in 2018, two last year, and one this year. Her two-goal performance against Kentucky in the 2019 regular season final earned her SEC Offensive Player of the Week honors.

Meghan Johnson has started seven of eight matches this season in the midfield for LSU and has assisted on two of LSU’s six goals scored. Her first career assist led to Taylor Dobles’ goal against Missouri on Oct. 16. Johnson led the counterattack by possessing the ball for nearly 70 yards down the pitch before playing Dobles in to the left side of the box. On October 23 she pounced on a loose ball before taking a few touches towards Alabama’s goal and then proceeded to play Tinaya Alexander into the right side of the box where she finished with the goal.

LSU has had eight players make their Purple and Gold debuts this season. Taylor Dobles has started all eight matches, and Wasila Diwura-Soale has earned seven starts. Jordan Johnson (three starts) and Lauren Robles (two starts) are two freshmen who have earned their first career starts. Mollee Swift (seven starts) and Bella Zanotelli (one start) have made their LSU debuts in goal. Savannah Mills has seen action off the bench in six of LSU’s matches and freshman Abby Smith has played in one match.

LSU has been outshot this season by opponents, 122-77. A closer look at attempts on goal shows a more level line of stats. Thirty-five of LSU’s 77 shots this season have been on goal for a percentage of 45.5 percent. Opponents have 48 shots on goal in their 122 attempts resulting in a percentage of 39.3 percent of on target shots.