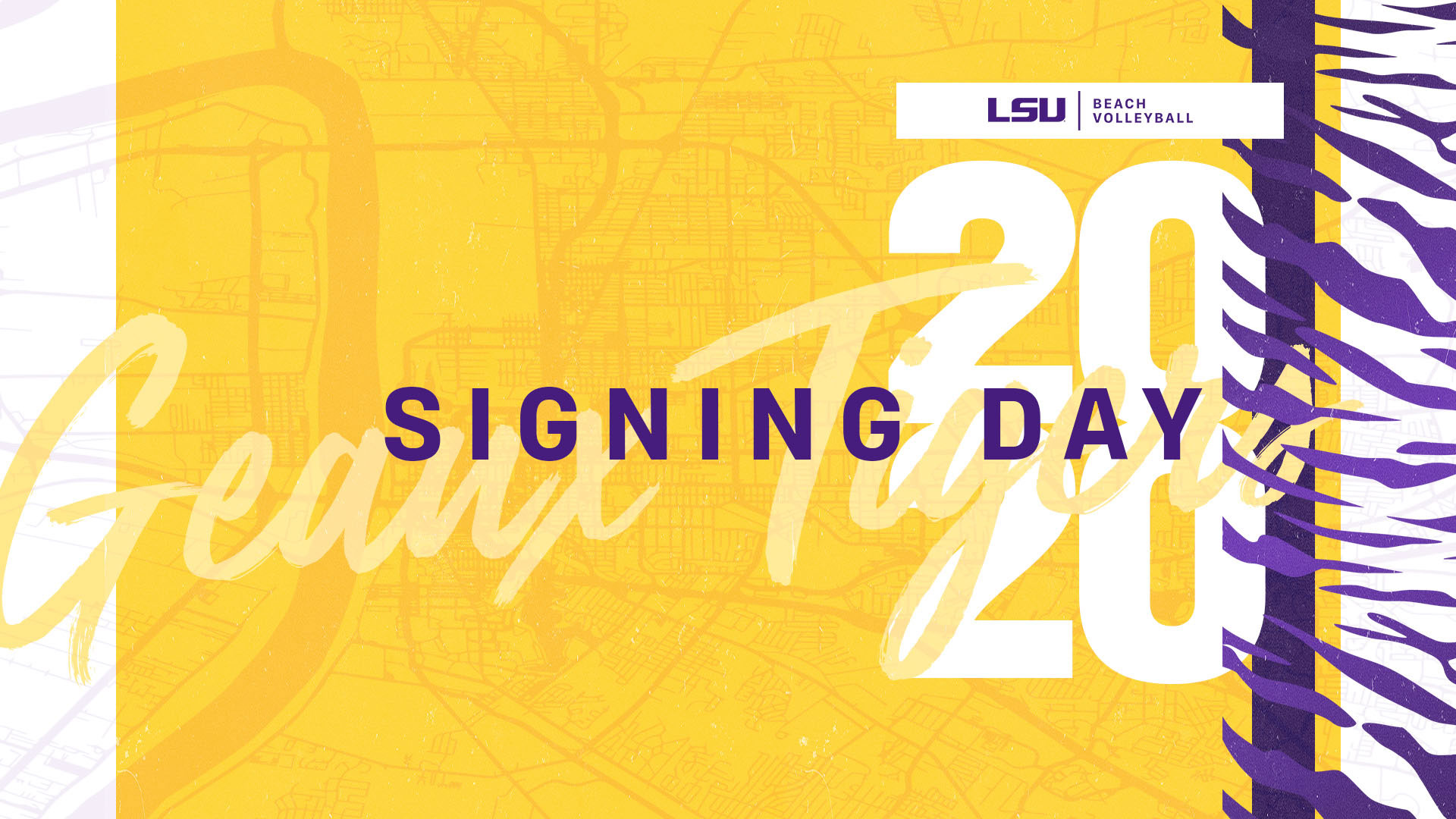 BATON ROUGE – The LSU Beach Volleyball Program added four players on Wednesday’s signing day, a class that will look to elevate the program both athletically and academically.

Parker Bracken, Cassidy Chambers, Ella Larkin and Madison Meyers will join an LSU program that has been a perennial Top-10 team in recent history and will look to push the Tigers to new heights in the sand.

“We are so excited for our 2021 class,” said head coach Russell Brock. ” It’s one of our smallest classes that we’ve had, but all four are accomplished beach players who will bring experience and excellence to our program.  They are all wonderful students and fantastic people.  There is no doubt they will be a blessing to our beach family.  We can’t wait to have them join us and help continue to strive for excellence.”

Parker Bracken is the first player from Mississippi to sign with the Tigers, coming from the city of Ridgeland. A diverse athlete, Bracken won team state titles in track and field, swimming and cheer, but her top sport has always been volleyball, joining the Jackson Academy varsity squad in seventh grade and going on to set the Mississippi high school state record with 2,494 career kills. After winning the state championship as a junior, Bracken was named the 2019-20 Gatorade Mississippi Volleyball Player of the Year before she led Jackson Academy to a second consecutive state title in her senior year.

“Parker has been a dominant presence both indoor and on the sand for years,” said Brock. “She has been impressing coaches, teammates and opponents for a long time. Her physicality is off the charts and her excellent decision making maximizes her ability.  She has the skills to both block and defend effectively for our program, which brings flexibility as a player.  Parker is a great student and a wonderful, joyful person, which makes her really valuable to our beach family.”

The reigning Gatorade Mississippi Volleyball Player of the Year is coming to Baton Rouge after one of the most decorated high school volleyball careers in the history of Mississippi pic.twitter.com/IMiU7elrrA

Cassidy Chambers will join the Tigers from Windermere, Florida. As a member of the Windermere High School indoor program, Chambers has been a team leader as a varsity captain from 2017-2019 and led the team to a District Championship in 2019. Chambers’ beach resume is just as impressive with numerous top-10 finishes playing around the country. In 2018 Chambers was named an AVP Grand Prix Top-10 athlete and earned a Junior Olympics Bronze Medal at Hermosa Beach in California. The following year she had top-10 finished in the BVCA at Hermosa Beach and the Junior Olympics at Manhattan Beach. That year saw her finish as a Silver Medalist at the Gulf Shores Beach Fest and earlier this year she earned a Gold Medal at the same tournament.

“Cassidy is the latest to join us from a great club down in Florida,” said Brock. ” She follows Olivia Powers and Lara Boos (both from Florida) and we have high expectations that she will continue that level of excellence that we’ve seen before.  She is a long explosive defender who plays and trains with intensity.  There is no doubt that her energy will continue to develop her as an elite player and will contribute positively to the excitement of our training and competition. Cassidy brings focus and excellence across the board, academically and athletically.”

Ella Larkin is from Maize, Kansas who will also play indoor volleyball for the Tigers. Larkin is the third Kansas native to sign with the program, joining junior Allison Coen (Lenexa, Kansas) and freshman Ellie Shank (Eastborough, Kansas) who Larkin has competed with on beaches all over America for years. She has led Bishop Carroll Catholic High School to Kansas Sub-state championships in her first three high school seasons and a third-place finish just a few weeks ago. In the sand, Larkin has been equally as impressive with numerous top-10 finishes in top tournaments around America.

“Ella is one of the strongest most steady players I’ve ever seen,” said Brock. “Her incredible control and really high intellect during play is impressive.  Ella has the ability to play with power and touch.  She’s a proven winner in the sand and on the court, and I can’t wait to see how she impacts both of programs.

“We’ve been watching Ella and Ellie play together for the past few years and were delighted when our indoor volleyball family was interested in adding her to their mix as well.  It’s not very often that you can get both players in a nationally relevant pair.”

The three-time Kansas State Champion is coming to Baton Rouge with numerous Top-10 finishes in beach tournaments across America! pic.twitter.com/3TC03gwRPW

Madison Meyers is a Louisiana native from Mandeville. She has been named a First-Team District MVP and helped lead St. Scholastica Academy to district championships in 2017 and 2018. Meyers has earned top-three beach finishes at AAU Nationals and P1440 Nationals. She has also been named as a P1440 Rising Star.

“Madison has grown up in the shadow of LSU and has watched our program grow since it began,” said Brock. “It is exciting to bring someone in who knows the history so well and is passionate about helping us reach new heights.  She has been training at an incredibly high level and is a student of the game.  As a defender, she commands a knowledge base and skill set that are incredibly polished.  There is no doubt Madison will bring a level of executional excellence, both in the classroom and in the sand, that will immediately push our team and help us be better.”

The Mandeville, Louisiana native is coming to Baton Rouge and has earned top-three finishes at the AAU Nationals and P1440 Nationals and has been named a P1440 Rising Star! pic.twitter.com/dF3ruwVJsd