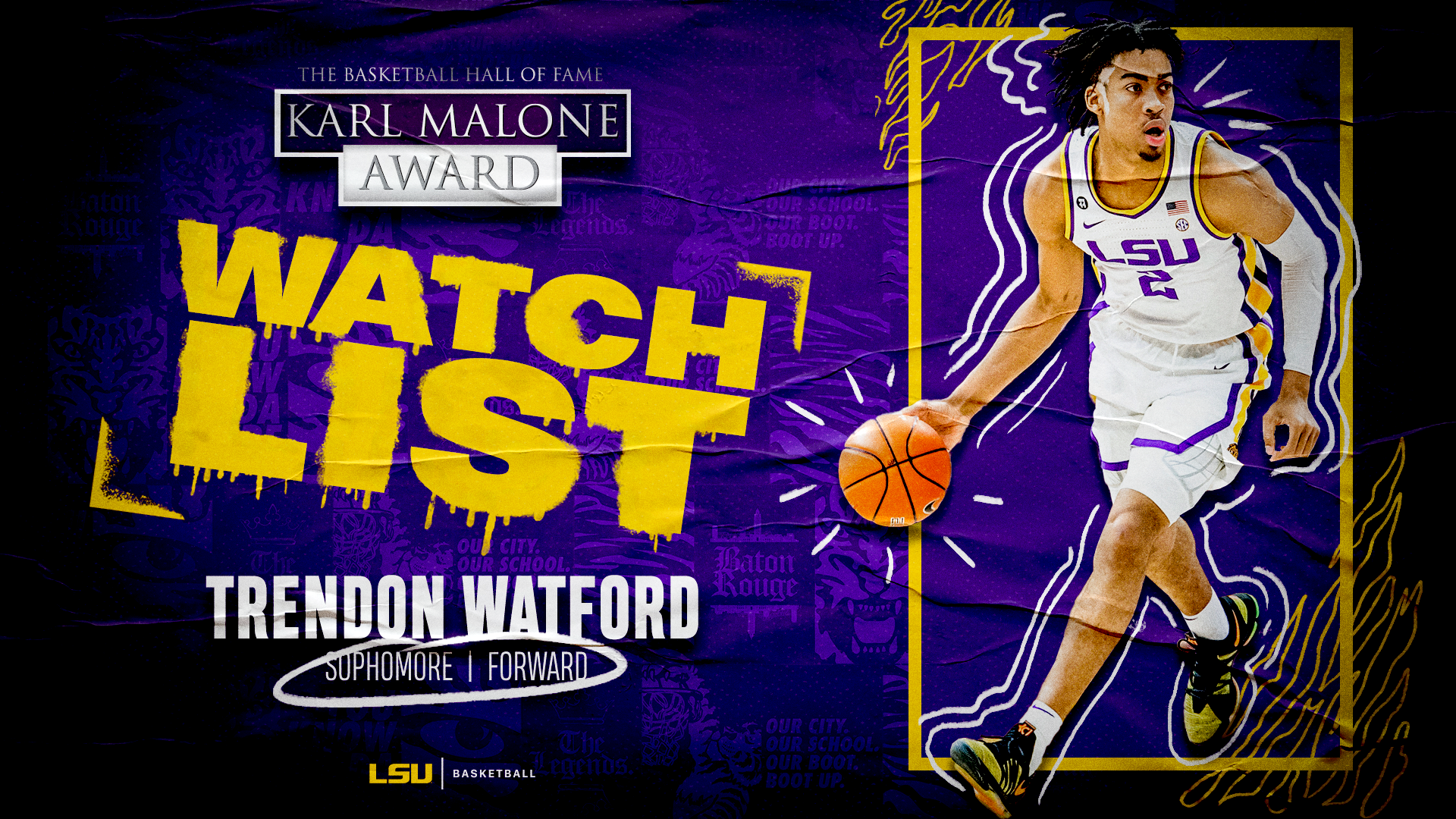 BATON ROUGE – LSU sophomore Trendon Watford is among the 20 watch list members announced on Thursday for the 2021 Karl Malone Power Forward of the Year Award.

Presented by the Naismith Memorial Basketball Hall of Fame, the award is named after Class of 2010 Hall of Famer and two-time NBA Most Valuable Player Karl Malone. The annual honor, in its seventh year, recognizes the top power forwards in Division I men’s college basketball. A national committee of top college basketball personnel determined the watch list of 20 candidates.

“The Basketball Hall of Fame is proud to annually acknowledge the best in the collegiate game with positional awards bearing the names of some of the greatest Hall of Famers of all time,” said John L. Doleva, President and CEO of the Basketball Hall of Fame. “To be named to the watchlist of the Naismith Starting Five is a great honor and I know our Hall of Famers sincerely enjoy the opportunity to watch these players compete. We thank Mr. Malone for his unwavering support over the years and the unique perspective he brings to ultimately selecting a winner.”

Watford earned league All-Freshman team honors after averaged 13.6 points and 7.2 rebounds a year ago. Watford started 30-of-31 games as a freshman and shot 48.9 percent from the field with 18 three-pointers. The Birmingham, Alabama native had 53 assists, 22 blocks and 27 steals. He averaged 13.8 points and 8.1 rebounds in the 18 league games.

College basketball fans are encouraged to participate in Fan Voting presented by Dell Technologies in each of the three rounds. In late January, the watch list of 20 players for the 2021 Karl Malone Power Forward of the Year Award will be narrowed to just 10. In late February, five finalists will be presented to Mr. Malone and the Hall of Fame’s selection committee.

The winner of the 2021 Karl Malone Award will be presented on Friday, April 9, 2021, along with the other four members of the Men’s Starting Five. Additional awards being presented include the Bob Cousy Point Guard Award, the Jerry West Shooting Guard Award, the Julius Erving Small Forward Award and the Kareem Abdul-Jabbar Center Award, in addition to the Women’s Starting Five.

For more information on the 2021 Karl Malone Award and the latest updates, log onto www.hoophallawards.com and follow @hoophall and #MaloneAward on Twitter and Instagram. Starting Five Fan Voting presented by Dell Technologies will go live on Friday, November 6.