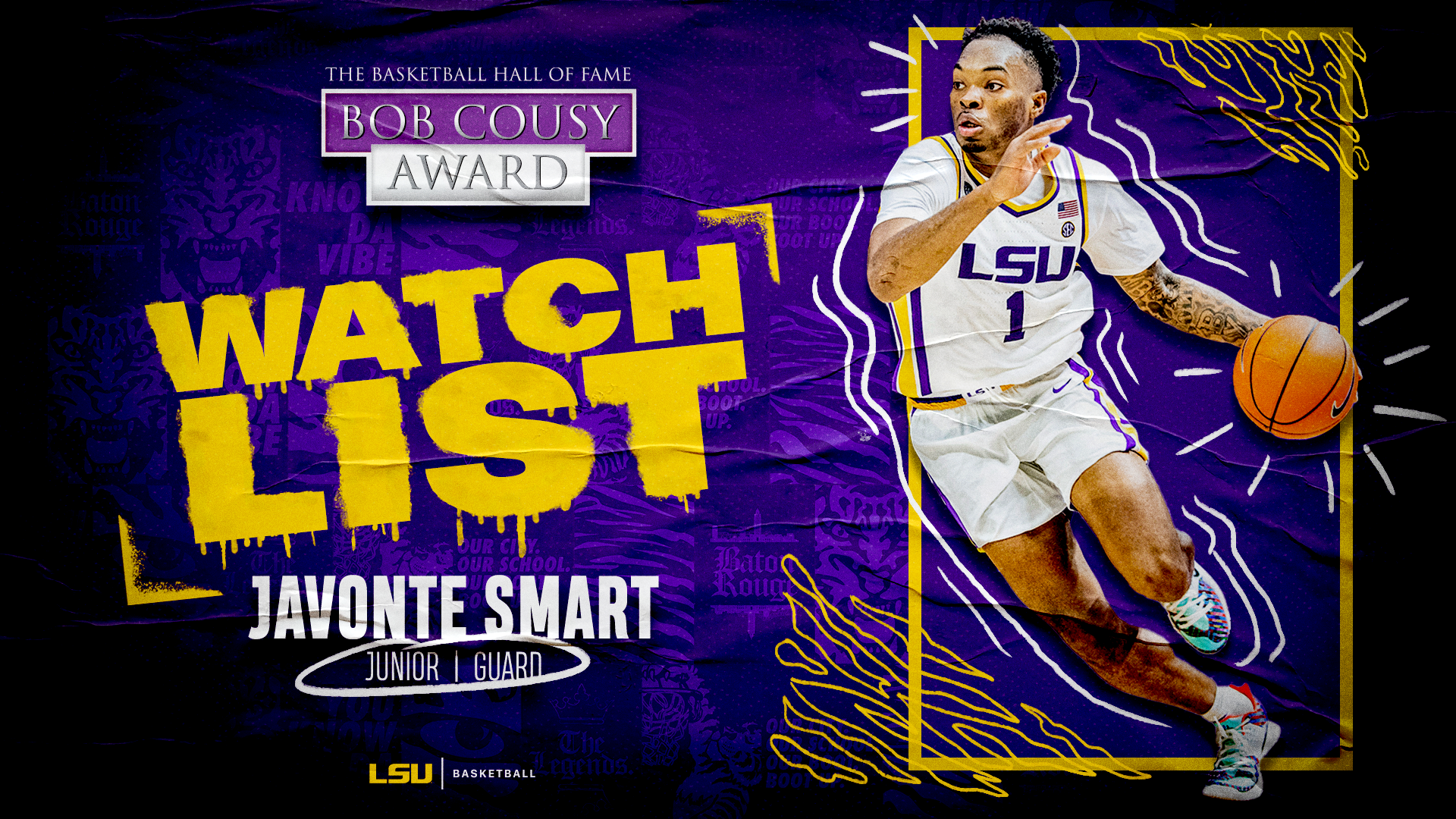 BATON ROUGE – LSU Basketball junior point guard, Javonte Smart, has been named Monday as one of 20 watch list candidates by the Naismith Memorial Basketball Hall of Fame for the 2021 Bob Cousy Point Guard of the Year Award.

Named after Class of 1971 Hall of Famer and former Boston Celtic and Holy Cross guard Bob Cousy, the annual honor now in its eighteenth year recognizes the top point guards in Division I men’s college basketball. A national committee of top college basketball personnel determined the watch list of 20 candidates.

The Baton Rouge native has made 87 three-point field goals in two seasons and in his college career has made 82.8 percent of his free throws, while averaging 3.4 rebounds and 3.2 assists over his first two seasons.

LSU’s Tremont Waters was a finalist for the award after LSU’s Sweet Sixteen season in 2019,

“Since 2004, the Hall of Fame has had the honor of bestowing the Bob Cousy Award on the best point guards in the collegiate game,” said John L. Doleva, President and CEO of the Basketball Hall of Fame. “The list is comprised of many outstanding student-athletes and we know the fans are very excited to see them take the floor. Starting Five Fan Voting presented by Dell Technologies will allow fans to support their favorite players throughout the season and eventually play a part in helping us to select our winner. We greatly appreciate the support of Dell Technologies, the fans, our selection committee and the namesake of the award, Mr. Bob Cousy.”

LSU fans are encouraged to participate in Fan Voting presented by Dell Technologies in each of the three rounds. In late January, the watch list of 20 players for the 2021 Bob Cousy Point Guard of the Year Award will be narrowed to just 10. In late February, five finalists will be presented to Mr. Cousy and the Hall of Fame’s selection committee. The winner of the 2021 Bob Cousy Award will be presented April 9, 2021, along with the other four members of the Men’s Starting Five. Additional awards being presented include the Jerry West Shooting Guard Award, the Julius Erving Small Forward Award, the Karl Malone Power Forward Award and the Kareem Abdul-Jabbar Center Award, in addition to the Women’s Starting Five.

For more information on the 2021 Bob Cousy Point Guard of the Year Award and the latest updates, log onto www.hoophallawards.com and follow @hoophall and #CousyAward on Twitter and Instagram. Starting Five Fan Voting presented by Dell Technologies will go live on Friday, November 6.