Turnovers Lead to Auburn Victory on The Plains 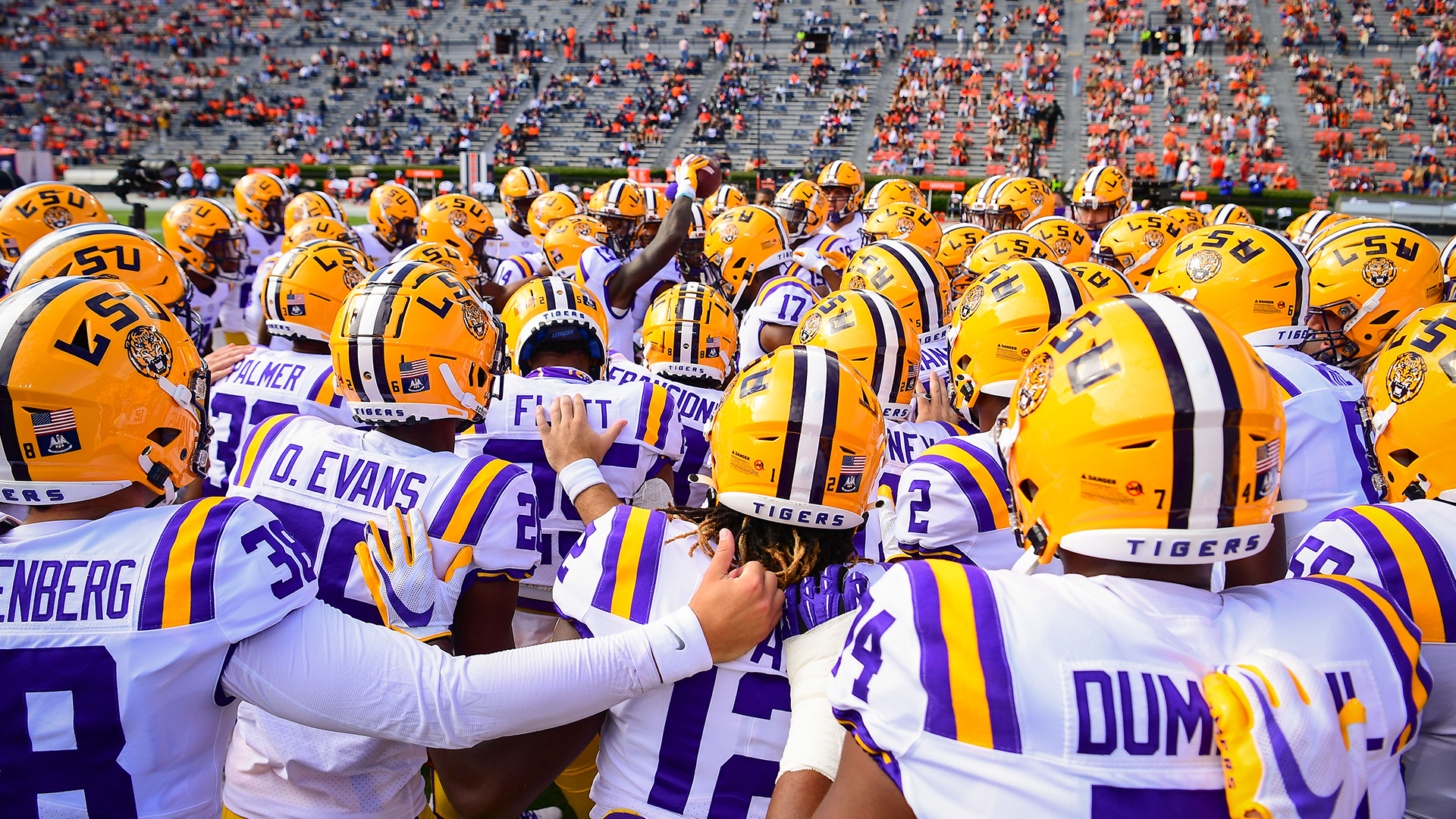 AUBURN, Ala. — Auburn scored 21 points off three LSU turnovers as the homestanding Tigers came away with a 48-11 victory on Saturday afternoon on The Plains.

With quarterback Myles Brennan against sidelined with an injury, LSU (2-3) turned to true freshmen TJ Finley and Max Johnson. Finley started the game and was 13-of-24 passing for 143 yards with two interceptions and a fumble that was returned for a touchdown. Johnson entered in the third quarter and finished the game 15-of-24 passing for 172 yards with a 43-yard touchdown pass to freshman wide receiver Kayshon Boutte in the fourth quarter.

LSU struggled to run the ball, managing only 32 net yards on 27 carries.

Auburn (4-2) was led by quarterback Bo Nix, who was 18-for-24 passing for 300 yards with three touchdowns including a 91-yard touchdown pass in the fourth quarter when the game was in-hand. Nix led Auburn with 81 rushing yards on 11 carries with a 5-yard scoring run in the third quarter. Anthony Schwartz had a game-high 123 yards including the long score, while Eli Stova had five catches for 64 yards with a touchdown.

LSU has an open date on Nov. 7 before playing host to Alabama on Nov. 14. Kickoff between the Tigers and Crimson Tide is set for 5 p.m. CT on CBS.

Fans are reminded to set clocks back one hour overnight, as daylight saving time ends.

Auburn won the coin toss and deferred its decision until the second half.

Nix’ 38-yard screen pass to Eli Stove put the homestanding Tigers on LSU’s side of the field at the 26. Two plays later, Nix connected with Seth Williams inside the LSU 5, where LSU’s Derek Stingley Jr. stripped the ball at the 1 and saw the ball roll out of bounds inside the end zone for a touchback. The play was initially ruled a touchdown but overturned by video review.

Though LSU dodged that bullet, Finley overthrew Marshall on a second-and-9 pass and Auburn’s Nehemiah Pritchett returned the intercepted pass 48 yards to the LSU 4.

After an Auburn penalty, Stove took a short pass from Nix, dodged a tackle and scored from the 9. Auburn led 7-0 with 12:13 remaining in the half.

On the ensuing drive, Finley and the Tigers converted a fourth-and-1 on the LSU side of the field by drawing Auburn offsides. LSU crossed midfield with a 12-yard pass to Jaray Jenkins, but couldn’t advance past the Auburn 44 and punted into the end zone.

With another defensive stop by LSU, Auburn punted to the LSU 25 while leading 7-0. On third-and-6 from his 29, Finley stripped of the ball by Auburn’s Derick Hall at the 20, where Chrstian Tutt recovered and ran for a touchdown.

After gaining a first down with a short run by John Emery Jr., three-straight incomplete passes by Finley led to a Zach Von Rosenberg 54-yard punt that was downed at the Auburn 1.

Auburn escaped the shadow of its end zone with a 26-yard run around the right end by Tank Bigsby. Nix ran for 11 before passing 28-yards to Williams for a first down at the LSU 34. Four plays later, Nix found Ze’Vian Capers wide open in the left corner of the end zone for a 9-yard touchdown and a 21-0 lead.

A 32-yard kickoff return by Trey Palmer helped LSU put points on the board in the final 33 seconds of the half. An 18-yard reception by Jenkins and 14 to Racey McMath setup a 50-yard field goal by York as time expired.

The homestanding Tigers started the second half with an eight-play, 75-yard drive to extend its lead to 28-3 with 11:35 to play in the third quarter. LSU looked to setup a third-and-long, but was guilty of a face mask penalty. A 23-yard pass from Nix to Anthony Schwartz setup a 5-yard touchdown run around the left end by Nix.

Finley’s first pass of the second half was deflected high into the air at the line of scrimmage and intercepted by Big Kat Bryant at the LSU 21. On third-and-goal from the 2, Bigsby plowed in to the middle of the line for a touchdown. Auburn led 35-3 with 8:55 remaining in the quarter.

Max Johnson entered for LSU and completed a 9-yard pass to McMath on his first play. However, consecutive negative plays led to a quick three-and-out and a 51-yard punt by Von Rosenberg.

On Auburn’s first play of the fourth quarter, Nix threw over the top to Schwartz for a 91-yard touchdown. The PAT hit the left upright and bounced away, and Auburn led 48-3 with 14:37 to play.

LSU’s first touchdown drive of the contest came on a 43-yard pass from Johnson to freshman wide receiver Kayshon Boutte, who sprinted behind a defender and caught the pass in stride at the Auburn 7-yard line.

After a penalty on the initial two-point try, Johnson ran around the left end to convert. LSU trailed 48-11 with 8:43 left in the game.