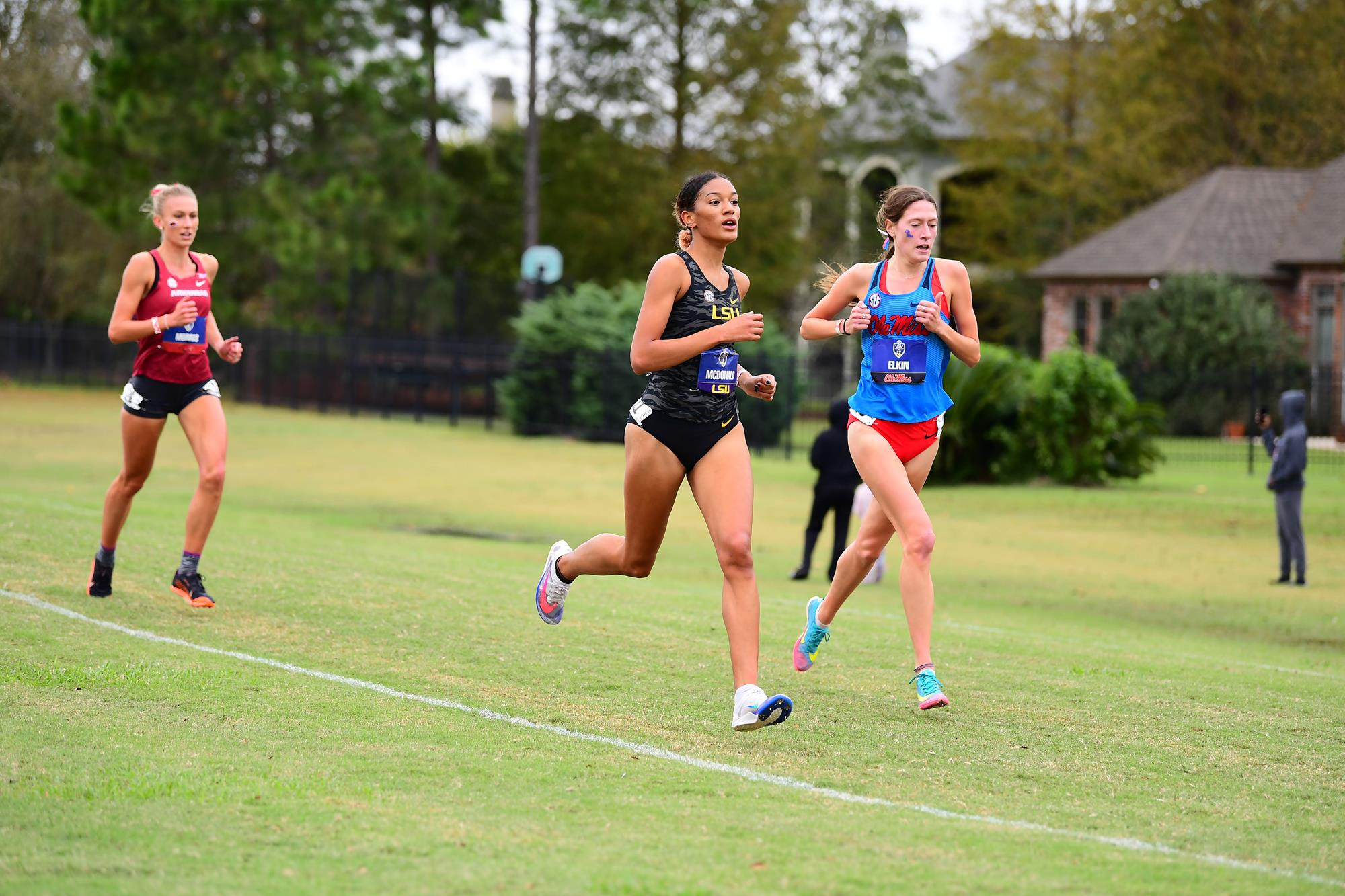 Baton Rouge, La. –  The LSU women’s cross country team had their best finish at the conference championships since 1999 as they placed fifth in the 2020 SEC Cross Country Championships with a team score of 173 points in the 6k event.  The men’s squad finished in eighth place as a team in the 8k run with a total of 208 points.  This year’s SEC Championships were hosted by LSU at the University Club in Baton Rouge.

“The women ran absolutely great today” said LSU coach Houston Franks regarding the women’s fifth place finish at the SEC Cross Country Championships. “We went into the meet with the game plan of being aggressive and tough.  We were going to put our nose in it, try to out tough people and that’s exactly what they did.  They got out really hard, got a good, strong start, grinded in the middle, and it was a great finish.  Last year we redshirted some people and we knew that we were better than the results showed.  Coming into this year, we knew we would be a lot better.  It was a great way to finish the season.  We know we have room to grow but it’s exciting.”

“I told my wife earlier this week that Katy-Ann (McDonald) is going to run really well because you could just see that she had an extra pep in her step” said Houston Franks regarding Katy-Ann McDonald’s performance.  “She always runs well but she went into today with a lot of aggression.  She put her nose into it, and she can be really tough in the middle when she wants to.  She ran fantastic today.”

“Everybody still has eligibility, so it is really exciting” said Houston Franks about the team heading into next season.  “One of the unique things about our sport is that cross country builds for track and track builds for cross country so we have a lot more good things ahead of us in the spring.  Anytime you finish a season on a high note, it gets you motivated in preparing for the next season.  As great as a finish as this is, it is important to have momentum going into the next one because ours in unrelenting.”

The women’s team got the morning started with the 6k run where they recorded their best finish in the conference championships since 1999.  The Tigers were led by junior standout runner Katy-Ann McDonald who placed 12th in the 6k event with a time of 20:33.8.  McDonald’s placing earned her a selection on the All-SEC Second Team.  McDonald capped off her cross country season with another scoring performance for the third time in the three meets that she has competed in this season.  Her 12th place finish is the best placing an LSU female runner has had at the SEC Championships since Laura Carleton placed 12th at the 2012 conference championship meet.

The next Tiger to finish for the women’s team was Julia Palin who finished her impressive season with another LSU top two finish.  Palin crossed the finish line in 31st place, running a time of 21:06.6 to contribute towards the Tiger’s best conference finish in 21 years.  Shelby Spoor was the third LSU runner to finish the 6k as she ran a time of 21:16.4 to place 37th.  Spoor was the fifth freshman to finish in the 6k, earning herself a spot on the SEC All-Freshman Team; she becomes LSU’s first woman to make the SEC All-Freshman team in the program’s history.  She made a significant contribution to the team in her first collegiate season as she scored in all four competitions this season.

Senior runner Alicia Stamey ran through the chute in 46th place with a time of 21:29.2 to add another scoring performance to her resume.  Stamey has scored in all four meets the team has competed in during the 2020 cross country season.  The final scorer for the women’s team was freshman Ashley LaJocies whose time of 21:51.2 was good enough for 67th place.  LaJocies performance marked the second time this season that she has been one of the first five LSU runners to cross the finish line.

The men’s squad followed the women’s performance with a team score of 208 points and an eighth place finish in the 8k event.  For the fourth time this season, Davis Bove was the first LSU runner to run through the finish line.  Bove registered a 17th place finish with a time of 24:32.6 in the team’s final meet of the season.  His 17th place finish is the LSU men’s team’s best individual finish in the conference championships since 2007.

Just like the regular season, Eric Coston was the second men’s LSU runner to finish, making it the fourth time in as many meets.  Coston ran a time of 25:00.5 to place 34th in the event.  Will Dart was the third Tiger to finish as he placed 43rd with a time of 25:10.4 in his first collegiate postseason action.  The freshman made an impact early on in his college career, scoring in all four meets this season.

Rounding out the top scorers for the men’s team were Jackson Martingayle and Cade Martin who finished in 52nd and 75th place, respectively.  The men’s team has been very consistent this season as four runners have scored in every meet.

The Arkansas Razorbacks swept the titles as both their men’s and women’s teams claimed victory on Friday morning.  The men’s team scored a total of 35 points in the 8k and the women’s squad recorded 41 points in the 6k race.

The 2020 SEC Cross Country Championships mark the end of the cross country season for the Tigers.  All of the results of this season can be viewed at lsusports.net.