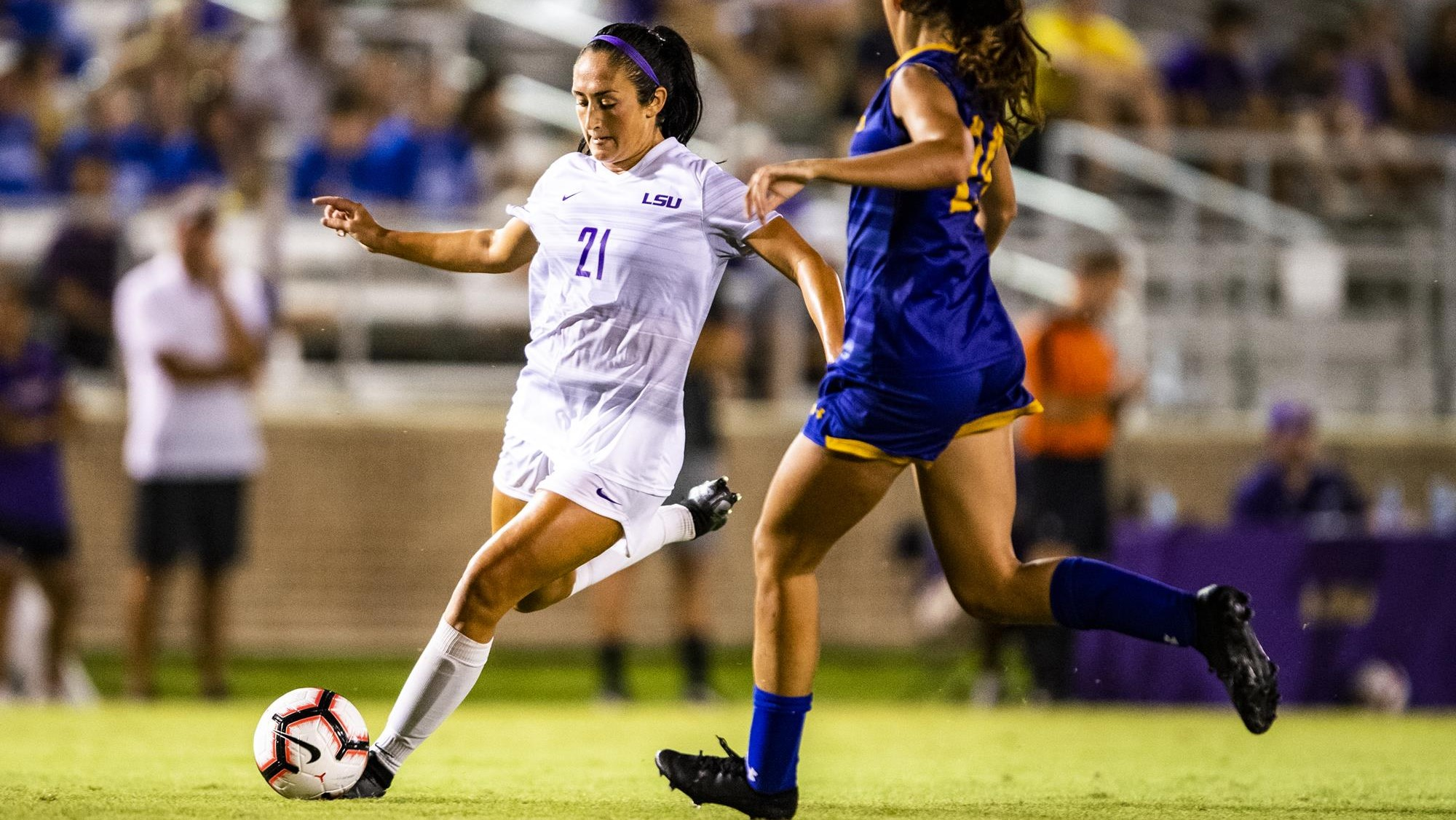 Baton Rouge, La. – LSU soccer (0-3-2) is riding a two match unbeaten streak as they welcome the Vanderbilt Commodores (3-3-0) to Baton Rouge for a Friday night contest at LSU Soccer Stadium. The match is set to begin at 7 p.m. CT and will be streamed on SEC Network+.

LSU soccer will honor three seniors – Courtney Henderson, Hannah Cuneo, and Raven Guerrero – prior to the match on Friday evening. All three were members of LSU’s 2018 team that captured the program’s first ever SEC tournament title.

The Tigers and Commodores have met 22 times; Vanderbilt has won 12 of those contests, LSU has seven wins, and there have been three draws. LSU’s last win against Vanderbilt came in 2013, a 2-1 road victory over the Commodores in Nashville on September 21.

Vanderbilt has accrued a league record of 3-3-0 for nine points. Their nine points are tied for the fourth most in the SEC this season.

Capacity for LSU home matches this fall will be at 450 fans, which is 25 percent of the seating capacity at LSU Soccer Stadium. Admission is free and gates will open one hour prior to the start of the game. Fans will be required to wear face masks in order to attend matches, tailgating will be prohibited and physical distancing will be mandatory. Pods groups of two, four, six, eight, and 12 will be marked off by colored tape for proper distancing. All the protocols for Friday’s home match can be viewed at lsusports.net.

2020 marks the 25th season of LSU hosting soccer matches at LSU Soccer Stadium. LSU’s record at LSU Soccer Stadium is 125-79-30 dating back to the 1996 season. The LSU soccer program played its first season in 1995 at the University High field adjacent to the football practice facility and went 9-2-1 at home that season. LSU owns a home record of 15-12-5 over the past three seasons and a half seasons.

The Tigers will be busy the next eight days. Following Friday night’s match against Vanderbilt, the Tigers will welcome Auburn to LSU Soccer Stadium for a Monday (Nov. 2) matchup at 2 p.m. CT; the game was rescheduled due to a positive COVID test and subsequent quarantine of Auburn athletes prior to the originally scheduled match on Oct. 3. Four days later on November 6 LSU will close out the regular season with a road trip to Texas A&M.

Redshirt junior Tinaya Alexander collected the second brace of her career in last week’s match against Alabama. She scored the first two goals in the match for LSU that resulted in the Tigers earning a point in a 3-3 draw. The most recent brace was her first registered against an SEC opponent as her first one came during her freshman campaign in 2017 against Mississippi Valley State University. Alexander is tied for the team lead in points (4) with two goals on the season. Alexander now has five career goals and 13 assists for a total of 23 career points.

Taylor Dobles scored her first career goal in LSU’s 1-1 draw at Missouri on Oct. 16. It came in the 38th minute off an impressive counter attack by the Tigers. Meghan Johnson, a junior, started the play with the ball in LSU’s side. She possessed the ball up the pitch for nearly 70 yards before playing Dobles in to the left side of the box. Dobles cleared her defender and beat the keeper to give LSU a 1-0 lead in the first half.

The redshirt freshman is tied for the team lead with four points on the season (one goal, two assists). She’s currently on a three-match point streak that includes the aforementioned two assists and goal. She registered her first-career assist on Oct. 11 at Mississippi State, scored her first career goal on Oct. 16 against Missouri, and registered an assist in last week’s match against Alabama. Dobles’ two assists rank tied for fourth in league play at 0.40 per game.

Noel has been a problem for all five opponents LSU has faced this season. She’s beat defenders off the dribble, she’s set up teammates with good looks, and has provided great energy for the LSU squad. Noel has two career goals and one assist to her name. Both goals have been scored against Mississippi State and her lone assist came in 2019 against Kentucky.

Sophomore transfer Mollee Swift has now played four matches in net for the Tigers since arriving in Baton Rouge. The sophomore has collected 18 saves and is allowing 1.58 goals per game with a save percentage of .720. She made seven saves in the season opener against Arkansas, had three against Ole Miss, and four apiece against Missouri and Alabama. Her two best saves of the season came against Missouri, including a leaping, game-saving save in the second overtime of that match.

Molly Thompson is the current LSU leader in career goals scored. Her first goal of the 2020 season came last week against Alabama in the 77th minute to level the match at 3-3. She now has six career goals; three from her freshman season in 2018, two last year, and one this year. Her two-goal performance against Kentucky in the 2019 regular season final earned her SEC Offensive Player of the Week honors.

Dishing Out The Assists

Meghan Johnson has started four of five matches this season in the midfield for LSU and has assisted on two of LSU’s five goals scored. Her first career assist led to Taylor Dobles’ goal against Missouri on Oct. 16. Johnson led the counterattack by possessing the ball for nearly 70 yards down the pitch before playing Dobles in to the left side of the box. Last week, she pounced on a loose ball before taking a few touches towards Alabama’s goal and then proceeded to play Tinaya Alexander into the right side of the box where she finished with the goal. Johnson’s two assists rank tied for fourth in league play at 0.40 per game.

Creating Out of the Back

Although Cooke hasn’t factored into the box score yet for LSU, she has provided a steady presence on LSU’s backline this fall. She did not get an assist on the play, but her challenge on an Alabama forward in the 26th minute jumpstarted LSU’s first goal of the match. She has played a number of quality balls to ignite numerous attacking opportunities for LSU out of the back as well.

LSU has had eight players make their Purple and Gold debuts this season. Taylor Dobles has started all five matches, and Wasila Diwura-Soale has earned four starts. Jordan Johnson (three starts) and Lauren Robles (one start) are two freshmen who have earned their first career starts. Mollee Swift (four starts) and Bella Zanotelli (one start) have made their LSU debuts in goal. Savannah Mills has seen action off the bench in four of LSU’s matches and freshman Abby Smith has played in one match.

LSU earned a point for the second straight match as they registered a 3-3 draw against Alabama (Oct. 23). The Crimson Tide took an early 2-0 lead 21 minutes into the match before play was suspended a little over two and a half hours due to lightning. The game restarted at 10:05 p.m. and did not conclude until 12:10 a.m. The Tigers scored goals in the 26th minute, 59th minute, and 77th minute to get level and earn a point.

LSU has been outshot this season by opponents, 81-61. A closer look at attempts on goal shows a more level line of stats. Twenty eight of LSU’s 61 shots this season have been on goal for a percentage of 45.9 percent. Opponents have 30 shots on goal in their 81 attempts resulting in a percentage of 37.0 percent of on target shots.

Chiara Ritchie-Williams and Maddie Moreau are serving as team captains this fall. Ritchie-Williams is the most experienced player on the squad and she is showing how valuable she is with a position change this season to the midfield. In her first three seasons, Ritchie-Williams anchored the backline for LSU at the centerback position, but for her senior season she has moved up to the midfield and will play a major role in LSU’s success. She has played in 63 career matches, starting 61 of those, and logged a total of 5,809 minutes. Moreau has played at leftback during her two seasons at LSU. She’s scored one career goal, registered her first career assist against Mississippi State (Oct. 11), and has played a total of 2,144 minutes out of possible 2,190 minutes in 23 career matches.