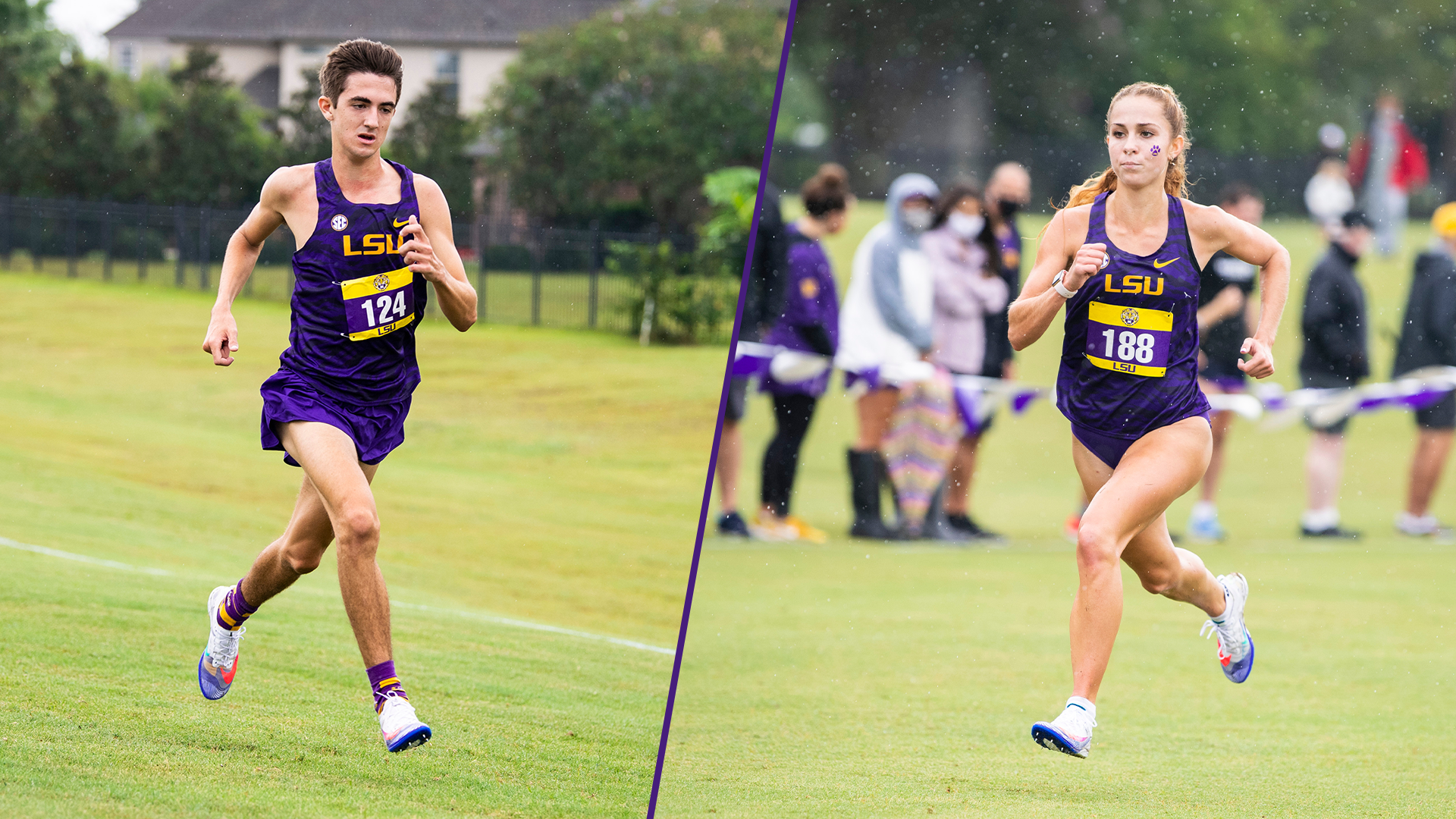 Baton Rouge, La. –  The men’s and women’s cross country teams will host the SEC Cross Country Championships at the University Club on Friday, October 30.  The women will start the morning with the 6k run at 9:05 a.m. CT and the men will follow with the 8k race at 10:05 a.m. CT.

The 2020 SEC Cross Country Championships will be televised live on the SEC Network and can be streamed on mobile devices.  For fans planning on attending the meet, parking will be available for the public at the L’Auberge Casino and Hotel (777 L’Auberge Ave, Baton Rouge, LA 70820). Shuttles to and from University Club will begin at 7 a.m. and will run until 12:30 p.m. following the event.  All fans in attendance will be required to wear a mask and follow physical distancing protocols.

The 2020 SEC Cross Country Championships will be the fourth time that LSU has hosted the event in school history.   The men’s squad is looking replicate their success from 2019’s SEC Cross Country Championships as they registered a team finish of eighth place which was their best finish since 2007. The LSU men’s team placed second in 1938 and 1989 at the SEC Championships, which are their best finishes in program history. The women’s squad best finish at the conference championships came in 1999 where they placed fourth overall.  This conference championship will be the first SEC postseason event to take place since the SEC Women’s Basketball Tournament that took place in March of this year.

“I feel really good about where both teams are right now” said LSU coach Houston Franks regarding where the team is at heading into the SEC Championships. “Everything has been going really well once we got the protocols in place, and practices have run smoothly and semi-normal.  The training has been really good, and I think both teams have gotten better week in and week out. I am pretty excited about where we are at.”

“If anyone has ever been out to the University Club you will know that it is absolutely gorgeous” said Coach Franks regarding the course at the University Club.  “The course itself is flat, as most of Baton Rouge is, but it does have a lot of character.  It has a couple of long straightaways that have some rolling hills that can break the rhythm up.  It will not be like running on track by any means, but it will be relatively flat.  It will also be a good, friendly course for people to come out and watch.”

The women’s cross country lineup for the SEC Championships will consist of nine runners.  Julia Palin, Katy-Ann McDonald, Alicia Stamey, Shelby Spoor, Molly Canham, Adele Broussard, Ashley LaJocies, Shanya Luna, and Gwyneth Hughes will all compete for the Tigers.  The men’s lineup will also consist of nine runners and seven of those competed in the 2019 SEC Cross Country Championships.  The men’s team will be represented by Davis Bove, Eric Coston, Jackson Matingayle, Adam Wise, Marshall Buhler, Will Dart, Cade Martin, Garrett Hamilton, and Blake Baldassaro. This year’s men’s and women’s teams have experience in post season action as many of this year’s runners ran at the SEC Championships last year. The top individual finishers for LSU last year were Eric Coston and Katy-Ann McDonald who placed 20th and 17th, respectively.  Coston’s finish was the LSU men’s team’s best individual finish since 2011 and McDonald’s 17th place finish was the women’s best since 2012.  Davis Bove finished in 23rd place with a time of 23:35.6 in the 8k run at last year’s conference championships and earned himself a spot on the SEC All-Freshman team for his performance.  Bove became the third LSU men’s freshman to be awarded a spot on the SEC All-Freshman team, joining the likes of Dajour Braxton in 2015 and fellow teammate Eric Coston in 2017. Alicia Stamey was the second Tiger to finish for the women’s team last season as she placed 68th with a time of 21:52.2.  Some other returning scorer’s from last year’s conference championship include Adele Broussard, Blake Baldassaro, and Cade Martin.

The LSU women’s cross country team has had a lot of success this season despite only competing in three regular season meets.  They won the title in the 5k Open at the Florida State Invitational with a team score of 27, making it their best finish of the season.  The Tigers placed second overall in the final meet of the regular season at the Arturo Barrios Invitational.  The women’s squad placed second with a team score of 52 points, only finishing behind the University of Texas in the 5k event.  The top runners for the women’s team this year have been redshirt sophomore Julia Palin and junior Katy-Ann McDonald who have been the top two scorers in each meet they have competed in this season. Palin returned to cross country action for the first time since 2018 in the team’s season debut at the LSU SEC Preview Meet.  Palin crossed the finish line in 16th place with a time of 17:51.7 in the 5k race and was the top finisher for the Tigers.  McDonald made her season debut in the team’s second competition of the season, the Florida State Invitational, where she won the silver medal for her time of 17:36.40 in the 5k run.  Palin closely followed McDonald as she placed third with a time of 17:41.10, contributing to the Tigers only victory of the season.  Palin and McDonald would once again be the top two finishers for LSU in the Tiger’s final regular season meet where they placed third and fourth in the 6k, respectively.  Palin ran a time of 20:44.90 and McDonald ran a time of 20:51.30 at the Arturo Barrios Invitational.  Alicia Stamey has also been a key contributor to the Tiger’s this season as she has been one of the top three LSU runners in all three meets this season, with her best finish coming at the Florida State Invitational.  Stamey ran a time of 17:55.80 to place fifth in the 5k Open event in the team victory.  While the team’s veterans have been the top runners, the freshmen have also contributed a scoring performance in all three meets.  Shelby Spoor has been the team’s top freshman as she has scored in all three competitions in her first collegiate season.  Spoor’s best finish came at the Florida State Invitational where she placed eighth in the 5k run with a time of 18:18.0.  Freshman Molly Canham added a scoring performance in her collegiate debut where she ran a time of 18:32.3 to place 28th in the 5k at the LSU SEC Preview Meet.

Like the women’s squad, the men’s team has found success this season despite the unusual circumstances.  Their best finish came in the team’s most recent meet, the Arturo Barrios Invitational, where they placed second overall in the 8k run with a team score of 66 points.  Just like the 2019 cross country season, the men’s team’s top performers have been Eric Coston and Davis Bove.  Bove has been the top LSU finishers in all three meets this season while Coston has closely followed him in each of them.  Bove finished in tenth place in the team’s season debut in Baton Rouge, La., where he ran a time of 17:52.9 in the 6k.  Coston registered a top twenty finish in the same meet as he placed 19th with a time of 18:27.2.  Bove and Coston followed up that performance with a sixth and 12th place finish, respectively at the Florida State Invitational.  Bove ran a time of 24:32.50 and Coston ran through the chute with a time of 24:47.50 leading the Tigers to a fifth-place finish in the 8k.  Davis Bove recorded his best finish of his young career in LSU’s most recent meet, the Arturo Barrios Invitational, where he claimed the bronze medal with a time of 23:59.80 in the 8k.  Coston earned a top ten finish as he placed eighth with a time of 24:12.20.  While Bove and Coston have been the top two runners for the men’s squad this season, they have also relied on the performances of sophomore Jackson Martingayle.  Martingayle built off of his impressive freshman campaign in 2019 with a scoring performance in all three meets this season.  His best finish came most recently in the 8k at the Arturo Barrios Invitational where he placed 16th with a time 24:41.30.  Freshman Will Dart has been a key addition to the men’s squad as he has scored in every competition this season.

The SEC Cross Country Championships marks the final meet of the fall season for LSU. All of the results from this season can be viewed at lsusports.net .