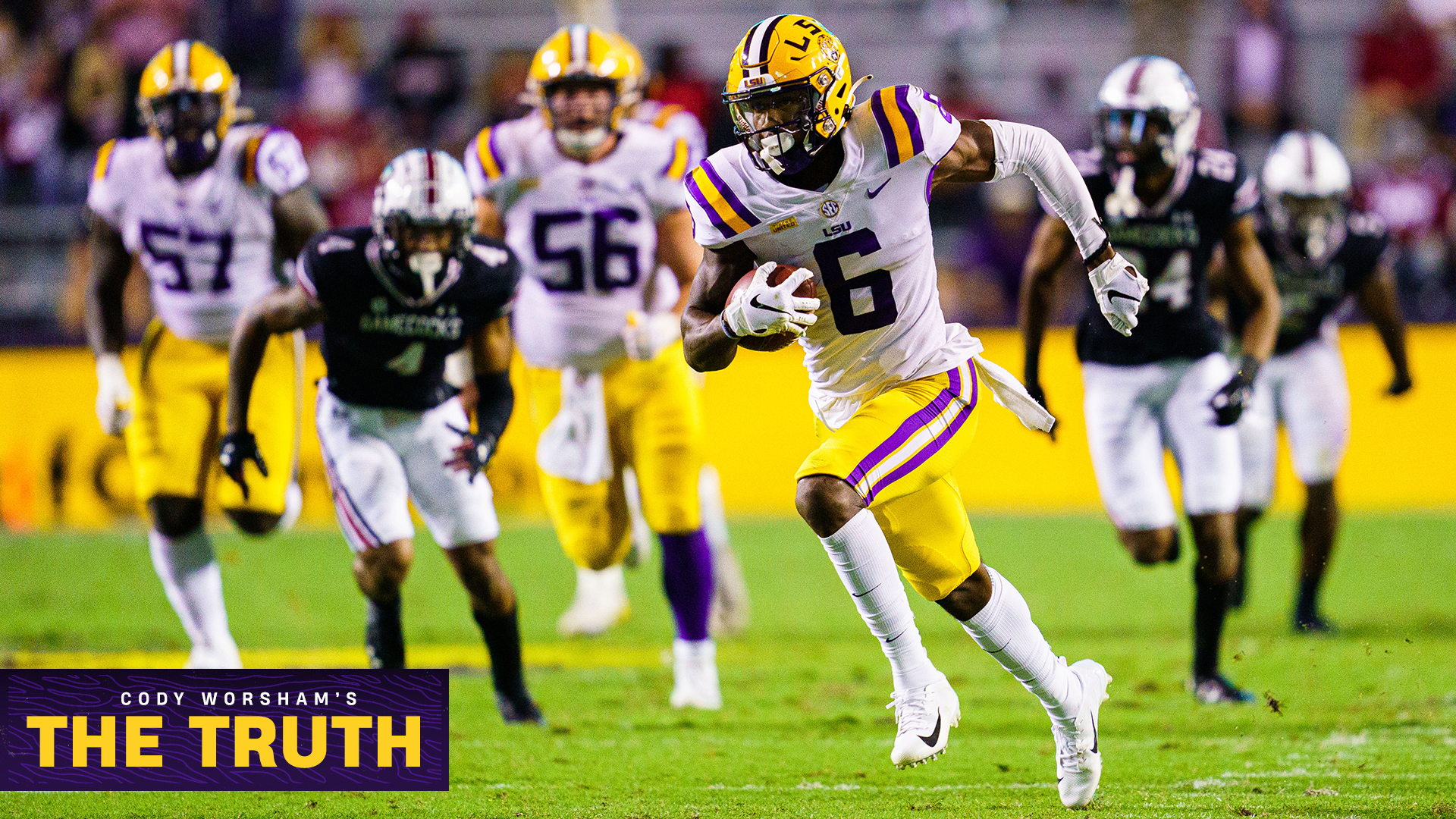 I know. It’s Tuesday. Competition Tuesday, to be precise.

Over at football ops, the truth has been told. Over here, on my laptop, the truth is ready.

Forgive my tardiness. I’d chalk to up to extra research or additional reporting.

But in the spirit of honesty, I just needed an extra day to get it done. On Monday, I couldn’t handle The Truth. While the Tigers compete on the ponderosa, I’ll dip back into my notebook for a day-late dose of verity.

I had no idea what to expect from LSU against South Carolina.

Starting quarterback out. True freshman in his place. Coming off a loss at Missouri and a rescheduled game against Florida. The range of possibilities presented were as wide as before any game I can recall in a long time.

What we got was a perfectly-designed, well-executed offensive game plan, some young standouts making plays on defense, a historic special teams play, and a resounding win.

This is a weird season. The schedule, the uncertainty, the turnover from last year to this, it’s all hard to balance into what’s reasonable to expect and what’s possible to understand.

That dynamic is difficult to navigate, but Saturday, it set the stage for an entertaining football game.

It was fun to watch, and I hope the win breeds more like it.

Terrace Marshall Jr. has 2 rec TD in 4 straight games, the longest streak by a SEC player since Keenan Burton in 2006 for Kentucky.

Marshall Jr. and Burton are the only SEC players with 2 rec TD in 4 straight games over the last 25 seasons. pic.twitter.com/QFwbFb0pjN

Try as I might, I simply can’t cover my bias toward Terrace Marshall. How good of a human being he is away from football is a factor (note: he’s awesome). How good of a football player he is on the field is a bigger factor, though.

I’m not the only one having trouble with coverage of Marshall. Through four games, he’s been unstoppable, scoring two more times against Missouri to bring his touchdown tally to nine on the season and 14 in his last seven games, dating back to last season.

When Ja’Marr Chase opted out, all eyes were on how Marshall would adapt to becoming WR1. Just as impressive as his embracing of the role, the pressure, and the spotlight has been his utilization by Steve Ensminger and Scott Linehan.

TLDR: Marshall is playing more in the slot and getting more targets closer to the line of scrimmage.

“We can put Terrace anywhere,” says Ed Orgeron. “He knows the offense…He is smart. He gets it. He knows football. Not like you need to leave him at one position, master that. He knows the whole offense. He probably could play quarterback.”

Saturday against South Carolina was the most obvious case of Marshall’s transformation from deep threat to shallow assassin. His average distance of target was just 8.9 yards. With a true freshman at quarterback, LSU designed plays to get its best player the ball as quickly as possible, and let him do the rest.

What he did with the ball was magic.

He’s hard to guard straight up, but give him eight yards of cushion to work with, thanks to bunch formations and trail concepts, and it’s impossible.

South Carolina even sends a robber safety, but McMath is in his way. pic.twitter.com/rbM9bKtAOn

“The yards after the catch, he catches that slant, goes for that touchdown, breaks those two tackles. I think that’s where you see him making a bunch of improvement,” Orgeron says. “He’s tall, is a big target, has great hands. Yards after the catch has been tremendous.”

Marshall is a good enough player to make plays, no matter where you put him. But teams are trying to stop him – in the clip above, South Carolina drops a robber safety into the middle of the field, specifically to take that throw away. LSU’s design is too good – Racey McMath occupies the safety, and Marshall, trailing, has enough space to change the game.

A qualitative trait Marshall’s developed this year is an edge. He’s nastier. He’s demanding the ball when he comes to the sideline. He’s in the face of opposition defenders between snaps. He’s blocking like a lineman. He’s toeing the line – not crossing it – and developing into an alpha presence on a team that needs just that.

“He’s become a team leader, vocal young man,” Orgeron says. “He’s the leader. He was in the background a little bit, kept quiet. I think the big thing with Terrace was to get healthy. Now he’s healthy. He’s confident. He comes off that field, ‘Man, coach, I want that ball.’ You want that in all receivers. He’s very confident right now and healthy.”

Marshall made life easier on his true freshman quarterback, but so did the rest of the offense – staff, running backs, and offensive line.

TJ Finley shone in his debut, completing 17-of-21 passes for 265 yards and totaling three touchdowns – two by air, one by ground.

Finley didn’t run the same offense Myles Brennan’s thrived in through three games. His throws were shorter and quicker by design, he handed the ball off more, and, most obviously, the Tigers leaned on the RPO (run-pass option) like they never have before.

LSU rushed 18 times for 106 yards and threw six times for 52 yards on RPOs against South Carolina, per Pro Football Focus. The Gamecocks had two choices: attack the run and get slanted behind, or defend the slant and surrender the run.

“Most of those runs were RPO,” Orgeron says. “The good thing about TJ, he’s 6’6″. He sees it really easy, man. He can see that slant behind him. It’s all built in. If they give us a box where we can run the football, we want to run the football. We have to. Going into the season, I thought the backs were going to be the strength of our offense.”

Ahead of the Chains

The RPO suits Finley, but LSU’s running game keeping the offense ahead of the chains suits him, too.

The Tigers ran 30 times on first down, more than the previous two weeks combined (29). While they weren’t explosive on those runs, averaging a solid-but-unspectacular 4.0 yards per carry, they used the run to stay ahead of the chains.

LSU also ran 18 times on second down – again, more than the previous two weeks combined. Those runs averaged 7.6 yards per carry and resulted in a first down or touchdown 50% of the time. Early down runs created either room to breathe or room to roam.

The domino effect was obvious. The third down woes that plagued the Tigers coming in? Gone, to the tune of 8-of-10 conversions and an average distance of just 3.0 yards needed for a first down.

“We have to run the football, especially on first down,” Orgeron said. “I thought our offensive line had their best game. That helped pave the way for TJ’s success. We couldn’t put it all on his shoulders.”

To illustrate how LSU stayed ahead of the chains, their offensive success rate was 62.2%, tops in the SEC this week.

LSU’s defense was better Saturday, too, but still has work to do.

The offensive game plan helped – more ball control with the run meant less time on the field for the defense (see the 21-to-9 time of possession advantage for LSU in the first half), and playing with a lead forced South Carolina to throw more than it would like.

And while the Tigers gave up their fair share of home runs – the Gamecocks had four passing plays of 30+ yards and two running plays of 45+ yards – they knocked some out of the park, themselves.

BJ Ojulari registered three sacks. Eli Ricks intercepted a pass and housed it for a touchdown. LSU’s defensive success rate was 62.8 percent, which would rank second in the SEC, extrapolated over an entire season.

They were, to use a baseball analogy, a power hitter who strikes out frequently. They were either going to swing and miss – poorly – or crush one out of the park. For this game, that was good enough, but it needs to get better in the weeks to come.

54%: Percentage of passing yards that came after the catch against South Carolina

37:% Percentage of passing yards that came after catch in LSU’s first three games

85: Tyrion Davis-Price got 85 of his 135 rushing yards after contact against South Carolina

125: Rushing yards totaled by LSU when running behind left guard Ed Ingram on an 8.7 yard per carry average

Through four games, LSU’s pass rush ranks 1st in the SEC in:

“I feel like the run allowed us to set up all the passes that we did. The O line made it easy on the running backs. The running backs made it easy on me. This game was well planned by coaches. That’s the biggest point I want to make here today, that our coaches did a very great job game planning for South Carolina.” – TJ Finley

A look inside the QB room last week.

Myles Brennan spent Friday going over blitzes and coverages with TJ Finley to make sure he knew everything that would come his way in his first career start.

One Team. One Heartbeat. pic.twitter.com/hNsrAb7Mx1

“We’re paving the way. Just like back in the day when Odell and Jarvis paved the way. I’m just happy to be a part of paving the way for the younger kids that are coming up.” – Terrace Marshall

“The sky’s the limit for the defense. It’s about small assignments, our eyes, where we’re looking at. We’ve been trying the dial in on the communication part of it and we did a pretty good job of it Saturday.” – Jabril Cox

Question: “Is there any controversy when Myles (Brennan) comes back?”

Ed Orgeron: “It might be on y’alls part. Everybody’s just yearning for it, I can feel it. It ain’t gonna be on our part, I can tell you that. Myles is our starting quarterback. TJ (Finley)’s done a great job.” pic.twitter.com/BtDZrZW1jN