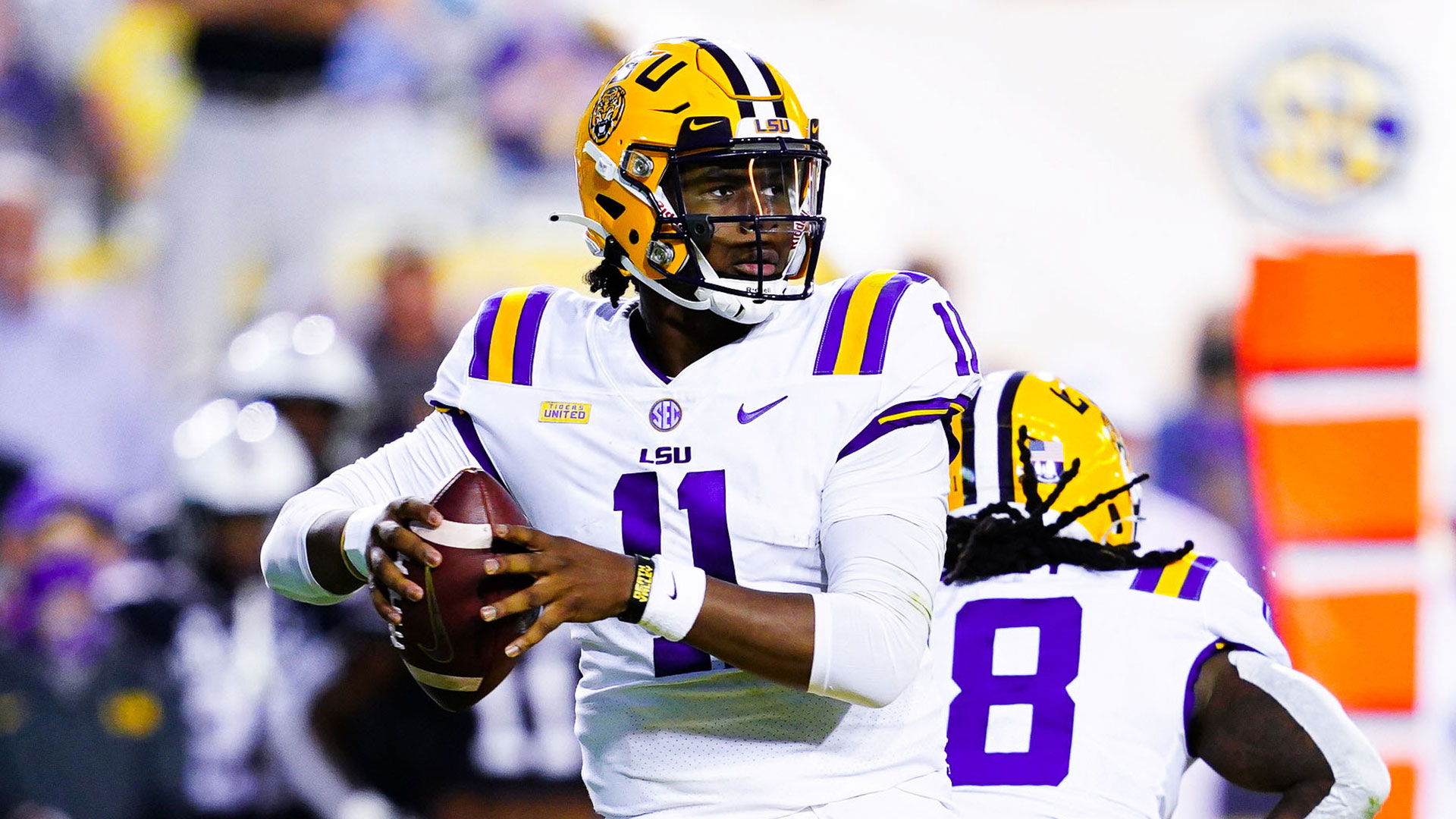 Playing at home for the first time since the season opener four weeks prior, LSU (2-2) scored on the ground, through the air, on defense and on special teams to roll past South Carolina (2-3).

After the Gamecocks cut LSU’s 31-10 halftime advantage to two scores, LSU’s Trey Palmer scored on a 93-yard kickoff return that broke a 39-year span between such touchdowns by LSU in Tiger Stadium. The most recent was by Eric Martin, 100 yards against Kentucky on Oct. 17, 1981.

Finley, who became the eighth true freshman quarterback to start for LSU since World War II, completed 17-of-21 passes for 265 yards with an interception and two touchdowns to wide receiver Terrace Marshall Jr. Finley also ran for LSU’s first touchdown – a 1-yarder midway through the first quarter. Marshall finished with six catches for 88 yards, while tying the program record for consecutive games with a receiving touchdown at seven.

Defensively, LSU true freshman cornerback Eli Ricks intercepted a pass for the third time in his four games as a Tiger, this time returning the pickoff 45 yards for a touchdown that put LSU ahead 31-10 just before halftime.

Though the contest included only one punt (by South Carolina), the Tigers defense stiffened in its half of the field. LSU forced four field goal attempts – three were missed from the 37, 17 and 23-yard lines – and another turnover on downs at the LSU 41.

The game was officially “Homecoming” at LSU, however, the 2020 on-campus celebration was muted due to the pandemic. During a halftime ceremony from the student section of Tiger Stadium, Anna Jones and Justin Lorio were announced as queen and king.

LSU returns to action on Saturday, Oct. 31, when traveling to The Plains to face Auburn at 2:30 p.m. CT on CBS and the LSU Sports Radio Network.

Freshman quarterback TJ Finley, making his first career collegiate appearance, led the Tigers to a score on their opening drive, as they moved 75 yards in 16 plays, with the march culminating on a one-yard sneak by Finley, giving LSU a 7-0 lead with 7:34 remaining in the first quarter.

South Carolina responded on its first offensive possession, driving 75 yards on three plays and tying the score on a 45-yard dash by running back Kevin Harris at the 6:40 mark of the first period.

LSU regained the lead on its next possession as Cade York nailed a 27-yard field goal, capping a 66-yard, 10-play march that ended with 2:05 left in the opening quarter. The drive was highlighted by a 26-yard Finley pass to wide receiver Jaray Jenkins that gave the Tigers a first down at the Carolina 33-yard line.

After the LSU defense recorded a three-and-out that featured a sack by outside linebacker BJ Ojulari, the Tigers briskly drove 65 yards on nine plays, completing the march and increasing the advantage to 17-7 on a seven-yard TD strike from Finley to wide receiver Terrace Marshall Jr.

South Carolina placekicker Parker White missed a 55-yard field goal midway through the second period, setting up the Tigers with a first down at their own 37-yard line.

However, Carolina defensive back Israel Mukuamu intercepted a Finley pass and returned it to the LSU 34-yard line. The Tigers’ defense didn’t allow a first down, and White connected on a 45-yard field goal to reduce LSU’s lead to 17-10 with 5:22 remaining before halftime.

The Tigers extended their lead to 24-10 at the 3:43 mark of the second quarter when Finley hit Marshall Jr. with a 51-yard scoring pass, capping a 75-yard, 5-play possession.

LSU cornerback Eli Ricks picked off a Collin Hill pass on the Gamecocks’ next possession, and the freshman returned it 45 yards for a touchdown, giving the Tigers a 31-10 cushion 2:43 before intermission. The play marked LSU’s second pick-6 this year – linebacker Jabril Cox returned an interception for a score in the Tigers’ season opener versus Mississippi State.

South Carolina drove to the Tigers’ 17-yard line on its final possession of the first half, but White was wide right on a 34-yard field goal, and LSU went to the locker room holding a 31-10 halftime lead.

Finley was 14-for-18 in the first half for 216 yards and two touchdowns. LSU running back John Emery Jr. rushed 14 times for 76 yards, an average of 5.4 yards per carry, and Marshall caught six passes for 88 yards and two scores.

LSU rolled up 330 yards of total offense in the opening half while limiting the Gamecocks to 188.

On its opening possession of the second half, South Carolina drove 74 yards in nine plays, reducing the deficit to 31-17 on Harris’ one-yard TD burst.

The Tigers retaliated in a flash, as Trey Palmer returned the ensuing kickoff 93 yards for a touchdown, marking LSU’s first TD kickoff return in Tiger Stadium since October 17, 1981, when Eric Martin brought back a kick 100 yards for a score versus Kentucky.

On a sprint to his right to receive the wobbly line-drive kick, Palmer muffed the ball near the numbers on the right side of the north side of the field near the LSU 5-yard line. As the ball bounced twice, Palmer turned his back to the defense to recover at the 7. He picked up a block by Josh Williams at the 11, dodged a diving tackle at the 13, outran an on-coming Gamecock at the 17 while Chris Curry and Nick Storz ran interference on a defender at the 21, and angled slightly to his left at the 32 to dodge the South Carolina kicker. As Jared Small occupied the last Gamecocks safety, Palmer planted his foot in the ground at the LSU 36 and ran laterally along the 40-yard line before turning the corner at the right hash marks near the LSU 41. Palmer then sprinted on an angle along the left side of the Eye of the Tiger, crossed the left hash at the USC 48, and outran five Gamecocks along the left sideline to score just inside the pylon of the south end zone.

LSU running back Tyrion Davis-Price reached paydirt from four yards out to cap a 77-yard, eight-play march, giving the Tigers a 45-17 lead at the 4:12 mark of the third period. The drive was highlighted by Price’s 35-yard sprint to the Gamecocks’ four-yard line.

The Tigers added another score at the 9:44 mark of the fourth quarter, as Emery Jr. capped a 58-yard, 10-play drive with a three-yard leap into the end zone.

Attendance was announced as 21,855. Tiger Stadium remained at 25-percent capacity due to COVID-19 restrictions.