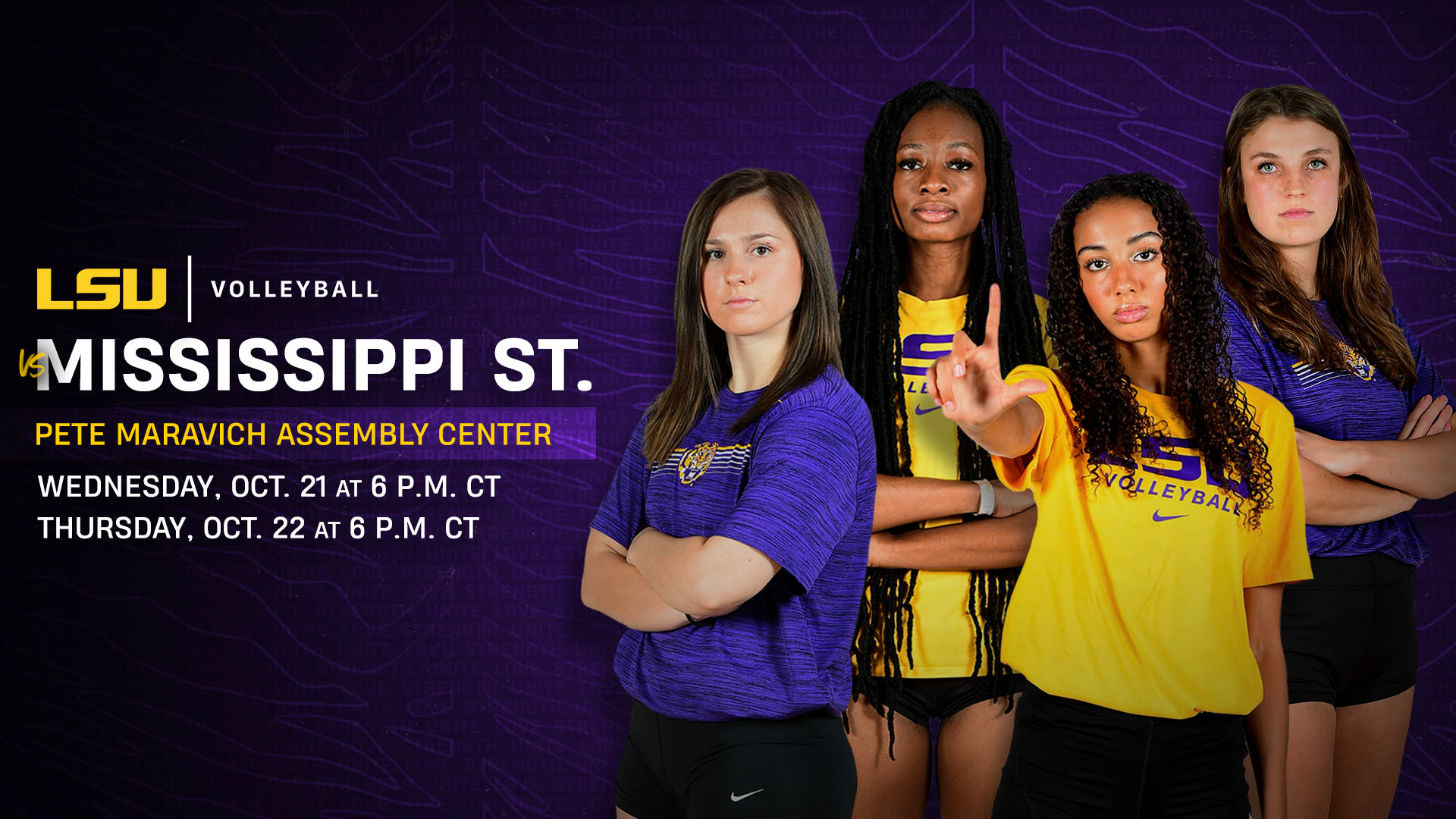 BATON ROUGE – The LSU Volleyball team (0-2, 0-2 SEC) returns to action this week with matches on Wednesday and Thursday as it hosts Mississippi State (0-2, 0-2 SEC) in the Pete Maravich Assembly Center. Both matches will begin at 6 p.m. CT.

Wednesday’s match will air on ESPNU with Eric Frede and Katie George on the call. The match on Thursday will be streamed on the SEC Network + with Lyn Rollins and Yvette Girourd.

Select concession stands and the LSU SportsShop will be open on the upper concourse only and all transactions will be cashless.

LSU Athletics officials remind fans plans for 2020 are subject to change before and during the season along with changes to public-health guidelines related to the spread of COVID-19. Fans with medical issues of concern as listed by the CDC are encouraged to enjoy games on television from home this season. LSU Athletics is asking all Tiger fans to adhere to health and safety guidelines as directed by public health officials.

The Tigers are home for the first time this year after dropping their first two matches of the season at No. 8 Texas A&M over the weekend. After getting swept Saturday, LSU responded well on Sunday and showed good progression, but ultimately fell in a back-and-forth five-set match to the Aggies.

Mississippi State fell to 0-2 over the weekend as well, dropping two five-set matches in Starkville against Arkansas.

The Tigers have dominated the series against the Bulldogs in recent years having won 24 of the past 27 matches, including six in a row. LSU has not lost a home match to Mississippi State since 2004.

Senior right-side hitter Taylor Bannister had a big weekend at Texas A&M, recording back-to-back double-doubles (15 kills and 14 digs on Saturday, 27 kills and 11 digs on Sunday), including a performance on Sunday with 27 kills, the third most in her career. Sophomore outside hitter Samarah Hill joined Bannister on Sunday with a double-double of her own with 14 digs and 12 kills.

Freshman outside hitter Paige Flickinger stood out over the weekend in her first collegiate action. She showed poise and leadership in her first action on Saturday with six digs and two kills. That performance earned her a spot in the starting rotation on Sunday where she continued to impress with a team-high 19 digs to go along with six kills.

Both Bannister and senior libero Raigen Cianciulli have the chance to move up on two separate LSU all-time record lists. With four kills this week, Bannister will move past Julie Stempel, who played from 1988-91 and had 1,300 career kills, into 11th place on LSU’s all-time kills list. Cianciulli can move into second place on LSU’s all-time digs list with 21 digs this week. She would move past Daniela Reis who played for the Tigers from 1989-92 and recorded 1,527 digs in her career.