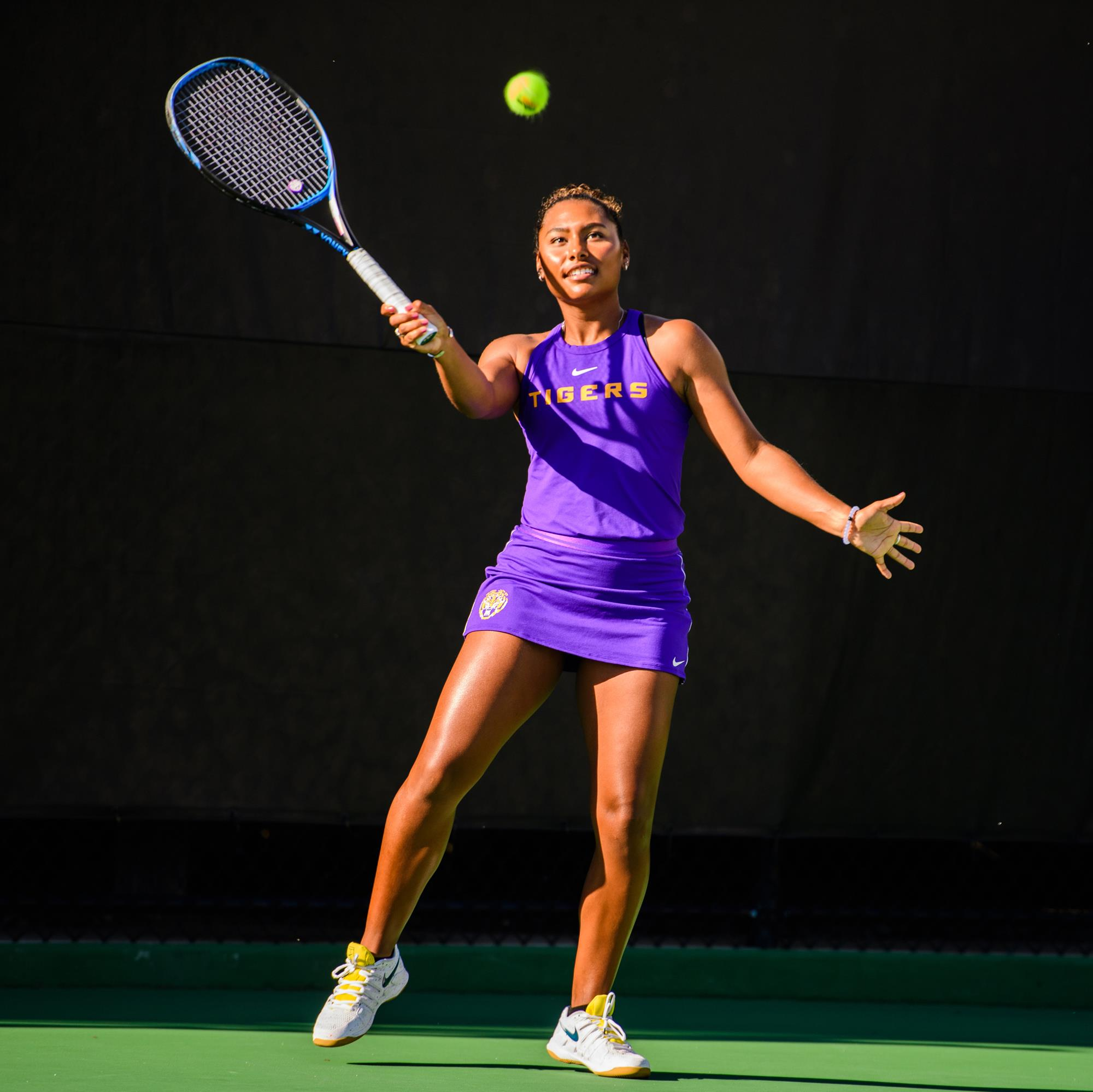 “We took advantage of our opportunity to play a bunch of highly competitive matches this weekend,” co-head coach Michael Sell said. “Props to Paris (Corley) for her singles play this weekend. She and the rest of the team are starting to find their groove, which is exciting.”

“We learned and grew as a team from this tournament, both on and off the court. We will take advantage of our short practice week to improve before heading into our last weekend of Fall competition.”

The first round of doubles action on Friday saw three LSU duos take on three from Rice. Senior Paris Corley and junior Anna Loughlan earned the first win of the weekend in a strong 6-2 win over Victoria Smirnova and Anna Bowtell.

Sophomore Safiya Carrington and freshman Samantha Buyckx picked up their first win of the weekend, defeating the team of Diae El Jardi and Federica Trevisan in a 6-2 contest.

The final match of the first round of doubles saw senior Eden Richardson and sophomore Nina Geissler drop a close 7-5 match to Michaela Haet and Linda Huang.

The second round of doubles had the Tigers take on a mix of teams from Texas State and Rice. Senior Taylor Bridges teamed up with Corley this round and the two defeated Texas State’s Rishona Israel-Lewis and Hana Kvapilova by a score of 6-3.

Geissler and Buyckx took on Rice’s Maria Budin and El Jardi in a match that saw the Rice duo narrowly beat the Tigers, 6-4.

The final doubles match of the day had Richardson and Loughlan team together to take on Texas State’s Andrea Fuchs and Sofia Murcia-Rodriguez. The English duo started strongly and were able to complete a 6-0 sweep over the Bobcats.

Singles action saw LSU take on a mix of players from Texas and Texas State. The first singles match of the afternoon saw Bridges draw Texas’ Peyton Stearns. Stearns won the first set 6-1 before holding off a late charge from Bridges in the second set to take it by a score of 6-3 and get the win.

Richardson’s opponent was Texas Longhorn Fernanda Labrana. Labrana won the first set by a score of 6-1 before edging Richardson in the second set 6-4 to win the match.

Corley earned the first singles win of the afternoon for LSU against Texas’ Gabby Cusano. Corley dominated the first set, winning 6-1 before repeating the score line in the second set to take a straight set victory.

Texas’ Malaika Rapolu drew Carrington in the next match. Rapolu was able to take the first set by a score of 6-3 and carried momentum into the second set to once again win 6-3 and defeat Carrington.

Buyckx earned the second singles win of the day after she defeated Nikita Pradeep from Texas State. Buyckx took the first set 6-3 before edging her opponent in an extended second set by a score of 7-5.

Next, Loughlan faced Texas State’s Renata Gonzalez. Loughlan dominated the first set, 6-1, to take the match lead. The second set saw Loughlan once again only drop one game to win 6-1 and earn her first singles win of the season.

The final match of the day had Geissler take on Texas’ Marta Perez Mur. Perez Mur took the first set 6-2 before Geissler responded with a strong 6-1 second set win to force a decisive third. In the third, Perez Mur took the lead and regained her footing to win 6-2 and claim victory.

Doubles action had the three LSU duos draw three Texas A&M Aggies. Richardson and Geissler took on Jessica Anzo and Tatiana Makarova, with the Aggie duo beating the Tigers by a score of 6-2.

Carrington and Loughlan faced Lucia Quiterio and Riley McQuaid next. Quiterio and McQuaid were able to hold off the LSU duo on their way to a 6-2 win.

The final doubles match of the afternoon had Bridges and Buyckx take on Elise Robbins and Katya Townsend. The match was a close one, with the Texas A&M team able to narrowly edge the Tigers by a score of 6-4.

Singles play had the Tigers face a mix of players from Rice, Texas State, and Texas Tech. Carrington earned the first win of the day against Texas Tech’s Kaitlin Staines. Staines blanked Carrington 6-0 in the first set before Carrington responded with a 6-3 win in the second. The decisive third set saw Carrington hold a narrow lead and edge Staines 6-4 to win the match.

Bridges faced Rice’s Huang in the next match. Huang took the first set 6-3 and held off Bridges’ in the extended second set, 7-5, to win the match.

Geissler was pit against Nell Miller from Texas Tech. Miller won the first set 6-4 to take the lead. Geissler responded in the second set, edging Miller in a tiebreaker to win 7-6 and force a third set. The third set saw Miller able to hold off Geissler and win by a score of 6-3.

Next, Corley faced Rice’s Haet. Corley controlled the first set and won by a score of 6-2. The second set was a repeat of the first, with Corley winning 6-2 to earn her second singles win of the weekend.

Richardson drew Texas State’s Israel-Lewis for her singles match. Richardson won the first set 6-2 before Israel-Lewis equalized with a 7-5 win in the second. The decisive third set saw Israel-Lewis carry momentum from her second set win and defeat Richardson 6-0 to win the match.

Loughlan earned her second singles win of the season in a three-set match against Texas State’s Kvapilova. Loughlan took the first set 6-3, with Kvapilova responding with a 6-4 second set win of her own. The third set saw Loughlan regain control of the match and emphatically win 6-1 to take victory.

The final match of day two saw Buyckx take on Texas Tech’s Kailey Evans. Evans was victorious 6-3 in the first set and repeated the 6-3 score line in the second to claim victory over Buyckx.

Two Tiger duos were matched against two Red Raider teams in the final round of doubles for the weekend. Richardson and Loughlan faced Nell Miller and Evans. The match was a back and forth one, with the Red Raiders able to win the extended match by a score of 7-5.

The final round of singles had the seven LSU Tigers face at least one representative of every school. Richardson picked up her first singles win of the season, defeating Texas A&M’s Anzo in a 6-3, 2-6, 6-0 match.

Corley finished her weekend a perfect 3-0 in singles matches after defeating Staines from Texas Tech. Corley took the first set in a commanding 6-2 manor before holding a 3-2 lead in the second before Staines had to retire.

Carrington faced Makarova in the next match. The first set was back and forth, with Makarova able to edge Carrington out, 7-5. The second set was another close one, with Carrington’s efforts coming up short as Makarova won 6-4 to take the match.

Geissler drew Texas State’s Lewis in her singles match. Geissler and Lewis’ back and forth first set saw Geissler narrowly win 7-5 to take match lead. Geissler’ second set saw her take the lead and not look back on her way to a 6-2 win to claim the straight set victory.

Next, Loughlan was in action against Evans from Texas Tech. Evans took the first set 6-2 before the two played an identical second, with Evans once again winning 6-2 to win the match.

Bridges earned her first singles win of the weekend, defeating Budin from Rice. Bridges took the first set 6-2 and was able to hold off a late charge from Budin in the second to win 7-5 and claim victory.

In the final match of the weekend, Buyckx faced Rice’s Bowtell. Bowtell won the first set 6-2 and carried momentum to the second, where she won 6-2 again to defeat Buyckx.

LSU will conclude its fall season by traveling to Tuscaloosa, Alabama to participate in the Alabama Invitational on Friday, October 23 through Sunday, October 25.