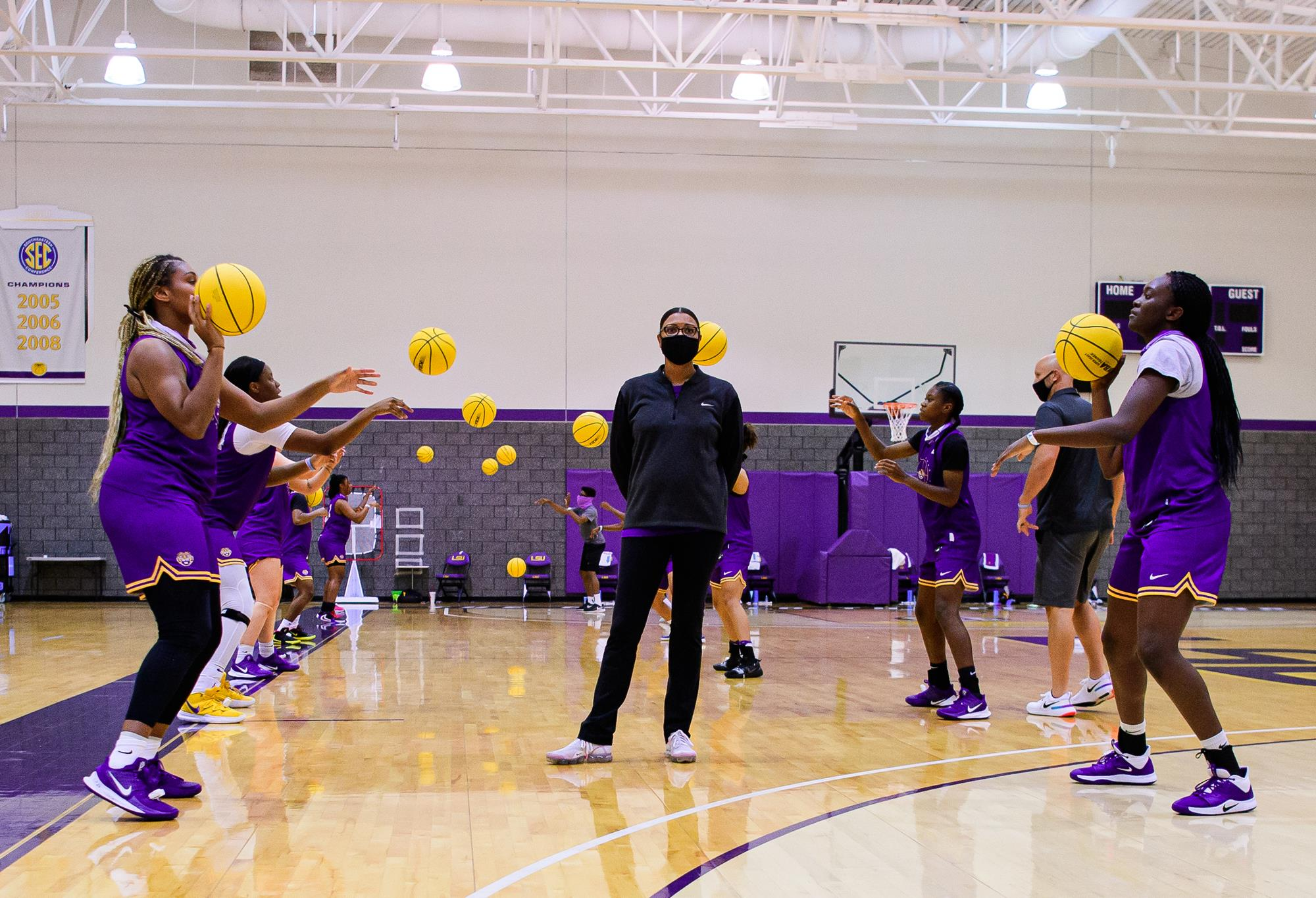 One word was mentioned ad nauseum at Nikki Fargas‘ opening press conference of the season: hunger.

After a 2019-20 season that got cut unexpectedly short, Fargas says LSU’s team is hungrier and more motivated than ever to build on the successes of last year.

The good news for Fargas? They return the pieces to do just that. The Tigers bring back experience with seniors Khayla Pointer, Jailin Cherry and Faustine Aifuwa. But they will also blend in a core of talented youngsters, starting with Domonique Davis and Tiara Young.

“I like the fact that we have a returning nucleus,” said Fargas. “I know they are starving to play considering how the season had to end for so many student-athletes. Time is of the essence, they understand there is a sense of urgency.”

Not being able to get a shot in the NCAA Tournament after a 20-win season was devastating, but it was also an opportunity for the team to appreciate the time they do have together. Through all the uncertainty, Fargas says, LSU was able to become more close-knit as a team in ways they haven’t been in years past.

“We’ve been able to utilize the isolation, in a sense, to bring us closer together,” Fargas said. “Over the summer, we consistently had weekly Zoom calls. We were able to connect our incoming freshmen with our young ladies who are overseas.”

It wasn’t always easy, though. With players from France all the way to Australia, LSU had to find the perfect time to conduct virtual meetings this offseason. The best time: 4 p.m. CST, because it was 7 a.m. in Australia and 11 p.m. in France.

With the lack of access to the gym in the summer, the players returned to campus under Phase 2 protocols, and Fargas could sense a desire to get up shots and feel a sense of normalcy. Fargas also said the staff was “intentional” in bringing in young talent who can shoot beyond the perimeter. Expect the Tigers to be more confident from deep.

“We’ve got some players that can really stroke the ball,” she said. “I like the fact that we are shooting the three-ball at a higher percentage. We’ll have multiple players that are comfortable in making threes for us.”

Fargas singled out Sarah Shematsi, a junior college transfer, as someone to keep an eye on this season. Over the course of two seasons at South Plains College in Texas, Shematsi averaged 12.9 points, 5.2 rebounds and 2.0 assists per game.

“This kid is going to be a pro,” Fargas said of Shematsi. “She’s showcased how well she can stroke it from deep. But she’s a big guard for us. She can play multiple positions. I’m excited about her.”

The depth of this year’s roster is something that excites Fargas, who said on Tuesday if LSU can get to 10-deep, that would be an ideal number for the season. It’s a number that allows you to press a lot, run the ball, get up-and-down the floor and wear down your opponents.

“The depth of our team this year is exciting,” said Fargas. “I like the fact that we might be able to do some platoon subbing, that we can bring in waves of players and keep the tempo at a high rate. I like the experience we have coming back, along with adding some newbies.”

Defensively, Fargas expects LSU to be a bit “questionable” in the early stages of the season because of scheme, not because of heart. The lack of contact in practice will have its effect league-wide, not just with the Tigers.

“I believe defense tells a lot about your team,” Fargas said. “It’s about heart, hustle and stamina. But it’s also about togetherness.”

With activities mostly taking place online and fully virtual this offseason, Fargas admitted she worried about the team chemistry. But through team building exercises and the return to campus, she feels the chemistry is really strong heading into the first practice on Wednesday.

Leadership played a big part in that. Now as a college graduate, Aifuwa returns as a staple and team leader for LSU. She’s not only transformed her body, but also how she attacks practices and games.

“She’s going to be one of those players that can dominate the league,” Fargas said of Aifuwa. “I like that she’s one of the best post players in the country. She has a nice touch around the basket. She had a great junior year and I expect an exceptional senior year.”

One aspect of Aifuwa’s game that the coaches have been focusing on is her ability to shoot threes. They believe an improvement in that area takes her game to the next level. The more layers they add to her game, the more versatile she will become.

Needing just 66 points to become LSU’s 34th player in history to score 1,000 career points, Pointer is someone Fargas says is finally coming into her leadership role. She’s finding her own voice and has always been a team-player.

“She’s been unbelievable for our team,” Fargas said of Pointer. “She led us in scoring last year, she’s our assist leader, our playmaker and go-to. She’s one of the best point guards in the country. She’s shown she can take over in big games. I’m excited about her senior year.”

Fargas’ excitement for this team is evident, just by the way she talks about them. She’s confident about what she returns, excited about the incoming talent she’s added, and anxious to build on last season. The Tigers provided a taste of what they can become in 2019-20, but Fargas hopes they’ve only scratched the surface.