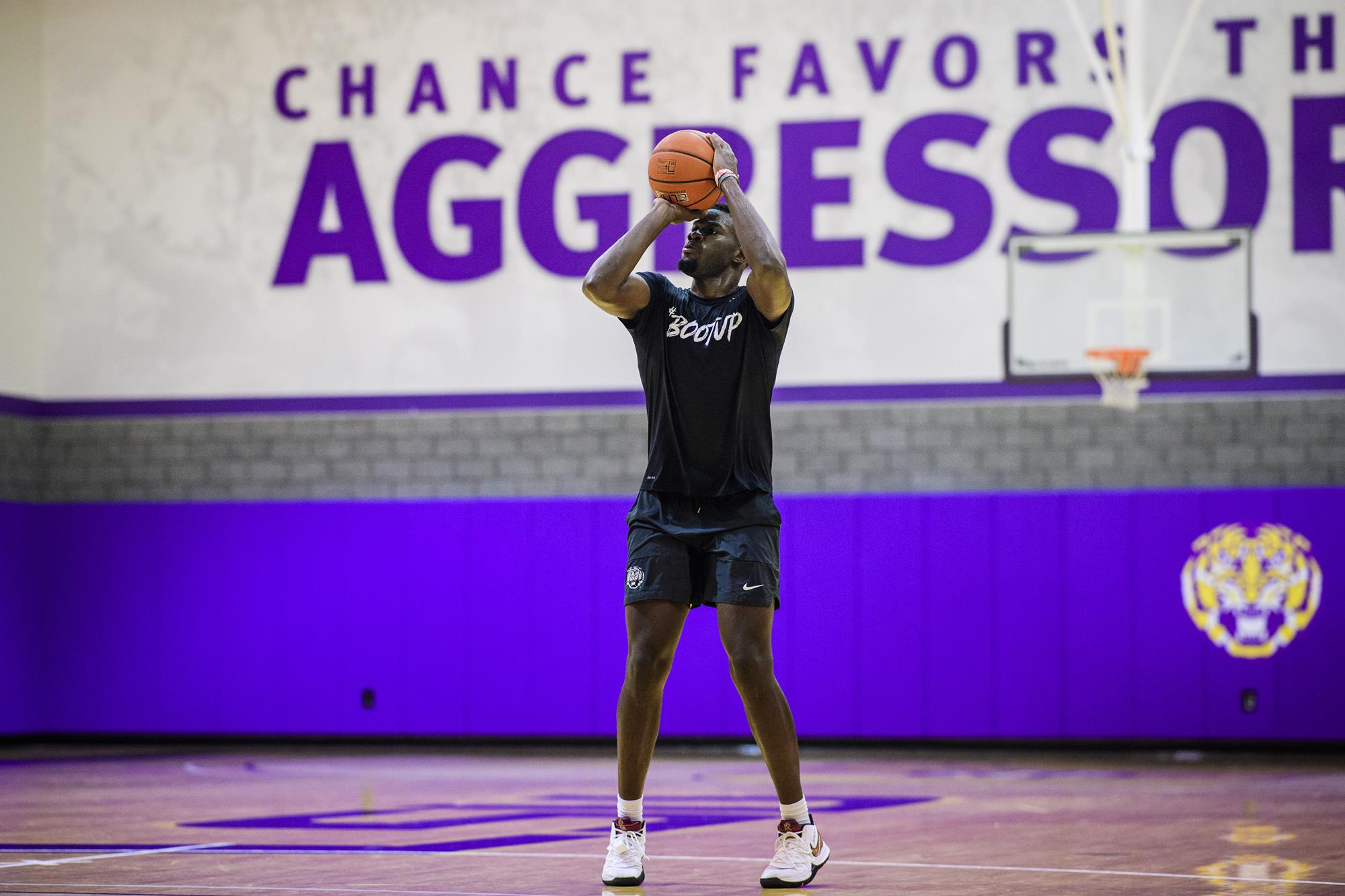 Wednesday marked the first day of basketball practice across the NCAA, but Will Wade‘s taking things at his own pace in 2020-21.

After weeks of restrictions on practice length and frequencies, Wade has 20 hours a week to work with his new team. But for the next few days, they’ll stay on their current pace, practicing three days a week, doing individuals and conditioning two days a week, and taking the weekend off. Once Boot Camp – the team’s annual conditioning test – is done, then it’s full speed ahead.

But not just yet. This team, more than any he’s had in three seasons at LSU, has the potential for greatness, and you can’t rush that.

“We’re going to phase into it,” Wade said Tuesday. “After we get through boot camp, we’ll go into practice every day. But I like where our team’s going. I like where we’re heading, I think we’ve got a lot of good pieces.”

Those pieces are evenly divided between new ones and old ones. Seven players are back from last season’s 21-10 (12-6 SEC) squad, with seven newcomers on a roster that’s as talented as any Wade’s coached in Baton Rouge.

The biggest improvement Wade hopes to see from last year to this is on defense. LSU ranked fourth in offensive efficiency in 2019-20 but just 179th in defensive efficiency, finishing 12th among 14 SEC squads in that department.

Enter an entirely new defensive philosophy this year. Wade was somewhat tight-lipped on specifics, but mentioned, at various times, pressing more and using some zone and matchup zone. The biggest shift, however, is in mentality and personnel.

It helps to add defenders like Jalen Cook and M’Wani Wilkinson into the mix, alongside defensively-oriented returners like Charles Manning Jr. Wade called Cook, a freshman guard from Walker, “the best on ball defender I’ve seen” since Briante Weber, the NCAA’s second-place all-time steals leader who played for Wade at VCU.

“Cook is as good as I’ve seen at hounding the ball and guarding the ball, and M’Wani, he may make two or three mistakes the entire practice on defense,” Wade said. “It’s uncanny how sharp he is defensively.”

Work has officially begun in ‘The Lab’ ?? #BootUp?? pic.twitter.com/HxK6VpaWPV

Wade also likes where the Tigers are from a depth perspective, both for in-game and in-practice reasons. He says there are nine players, today, he’d feel comfortable playing in an SEC game, with another three or four who are showing flashes but need to show them consistently.

While that will be beneficial once conference play tips off, it’s invaluable in practices. Gone are the days of walk-ons and managers filling in to make numbers. Here are the days of all out battles in the practice facility.

“Depth is overrated a little bit for games — we’re not gonna be able to play more than nine or 10 guys — but very underrated for practice,” Wade says. “The reality was last year, we had a walk on guarding Javonte Smart in practice. He gave it his all, and he did a great job, but Javonte could get in the paint, could get wherever he wanted to any time. He could have a C practice every day. Now we’ve got Jalen Cook guarding Javonte and Javonte guarding Jalen Cook.

“You can’t take an off day. If you relax for one second Jalen Cook’s going to take the ball from you and go lay it in…That’s where the depth really pays off. You can’t take an off day. You can’t relax for a minute. If you miss a checkout against one of our managers, you can still go get the ball. If you miss a check out M’Wani Wilkinson, he’s going to dunk it.”

Wade used to say he’d cry the day Skylar Mays left LSU, but replacing him with Cam Thomas will go a long way to drying up his tears.

Thomas, a five-star freshman shooting guard, comes to LSU as the all-time leading scorer in the history of the prestigious Oak Hill Academy in Mouth of Wilson, Virginia, which boasts prolific alumni like Carmelo Anthony, Kevin Durant, Brandon Jennings, and more. Now, he gives the Tigers a scoring boost from the arc, the paint, and, most importantly, the free throw line.

“He’s the real deal. It’s to the point where, as a coach, and even our team, when you’re on his team in practice, when he misses, you’re almost disappointed, because as soon as it leaves his hand, you already count the shot,” Wade says.

“The shooting will garner a lot of attention because he’s going to hit some trick shots and some crazy shots and hopefully if there’s fans – people will be ooh-ing and ahh-ing,” Wade says. “But the part I’m excited about is he gets fouled. He’s a 90-plus percent free throw shooter. He’s able to get in the paint, he’s able to drive it in there, he’s able to score a lot of different ways, which is very, very good.”