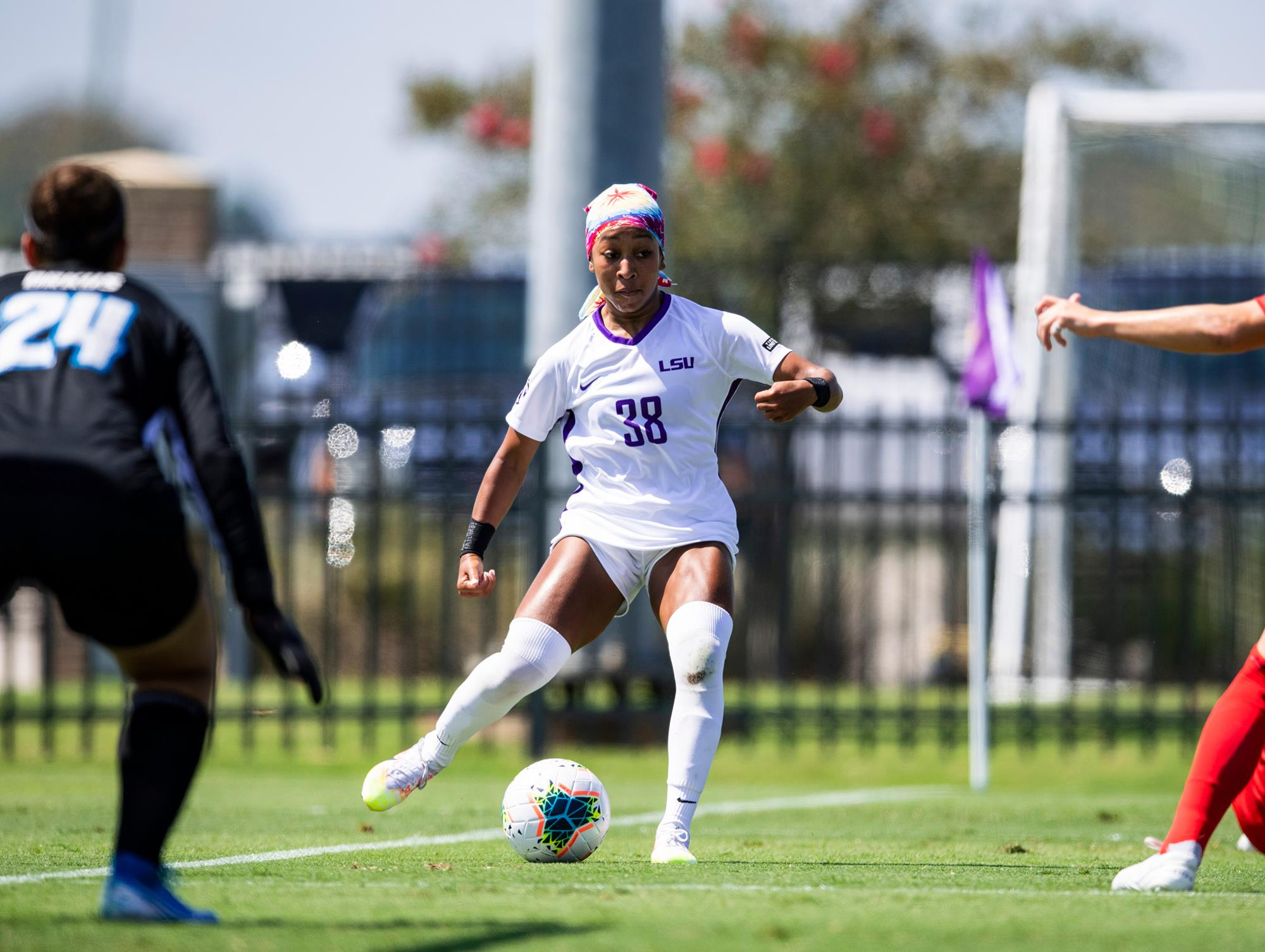 “We showed a tremendous amount of resiliency with key players missing and coming back after falling behind early. We have to keep creating chances and putting ourself in good situations, but we have to make sure we get shots on frame and test the other side’s keeper more often.”

The Tigers came out attacking from the start and dominated possession in the beginning of the game. Junior Meghan Johnson had the first chance of the day in the first minute as her shot from the edge of the box just trickled wide-right of the goal.

The Bulldogs scored the first goal of the match in the ninth minute, after Birna Johannsdottir found Onyi Echegini in the box, whose shot powered past freshman Bella Zanotelli into the bottom left corner of goal.

LSU responded with chances of its own. In the 16th minute, Dobles pounced on an error by the Mississippi State defender and shot from twelve yards out; the ball beat the keeper but caromed off the left post and rebounded wide. The 42nd minute saw Dobles dribble the ball into the box and shoot across goal, requiring Bulldog keeper Maddy Anderson to parry the shot wide.

Zanotelli started her first collegiate match and made her first save in the 26th minute, collecting a shot that was headed towards the bottom left corner. Zanotelli saved two more shots in the second half to take her save total to three for the afternoon.

Sophomore Maddie Moreau’s header in the 54th minute was heading to the bottom corner before Anderson collected the shot to keep the match 1-0. One minute later, Moreau took a throw-in and found Dobles, who crossed the ball into the center of the box with Noel there to drive the ball into the goal and tie the game up from inside the six. It was Noel’s second career goal, and both of them have come against Mississippi State. It was the first-career assists for Moreau and Dobles as well.

A Thing Of Beauty

Tune into the SEC Network to watch the rest of our match.

The Tigers thought they had a second goal in the 77th minute after freshman Abby Smith found Dobles in the box and lifted a ball into the top left corner, but the offsides flag was up. The Bulldogs scored the go-ahead goal less than a minute later in the 78th minute when Hailey Bentil-Farrington’s ground cross found Monigo Karnley in the six-yard box, who snuck the ball past Zanotelli.

The Tigers had two big opportunities in the final minutes. Freshman Jordan Johnson’s header in the 86th minute off an LSU corner kick was goal-bound before being saved by Anderson. LSU thought they had equalized in the 89th minute when Moreau’s shot from seven yards out found the back of the net, but Moreau was deemed to be in an offsides position.

The Tigers registered 13 shots, three of which were on net, and registered more corners than Mississippi State with a 6-5 advantage in that category. Abby Smith (19 minutes) and Lauren Robles (12 minutes) made their LSU debuts on Sunday. Courtney Henderson came off the bench and played crucial minutes in the midfield, while Raven Guerrero made her season debut with 17 minutes on the pitch.

The Tigers will face off against Missouri on Friday (Oct. 16) at 7 p.m. CT in Columbia, Missouri.