Taylor Bannister is Eyeing the Rafters 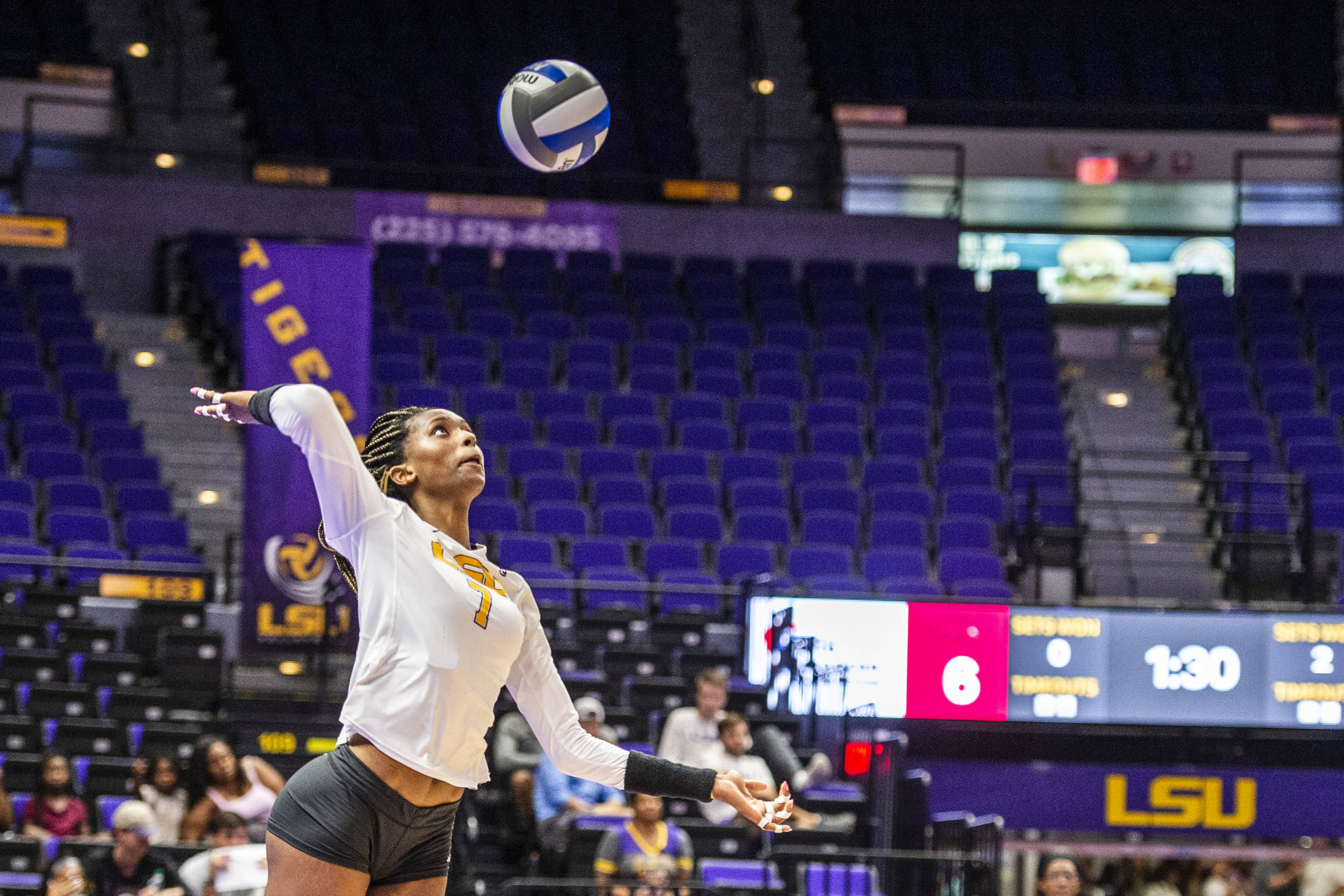 Every now and then, Taylor Bannister will look up at the rafters in the PMAC and question why she doesn’t see any retired volleyball jerseys.

She sees basketball. She sees gymnastics. But still no volleyball. She says it’s something she jokes about with her teammates, but don’t get it twisted: it motivates her.

“Setting high goals and high standards,” Bannister said on her approach to each season. “Our joke with each other is that we’re trying to retire a jersey. That’s driven a lot of our motivation.”

Every point of every match.
Taylor Bannister is bringing it. pic.twitter.com/VLbSEOEGVp

As a three-time first team All-SEC selection and two-time All-American honorable mention, Bannister is already cementing herself as one of the most decorated players in school history. Totaling 1,255 career kills, 24 assists and 40 aces through three years in Baton Rouge, it’s not far-fetched to think she could reach for the rafters.

“She understands the game differently,” said head coach Fran Flory. “She has a different vision. She can talk her way through anything. She has already established herself as one of the best to ever put on the uniform.”

Physically, Flory says Bannister will likely stop growing around age 27. But if she keeps playing the sport and pushes through the hurdles that come with a professional career, her ceiling will be special.Bannister is the daughter of two professional basketball players. Her dad, Ken, played for the New York Knicks and the Los Angeles Clippers, while her mom, Pennie, played in the WNBA. Standing tall at 6-foot-5, most people assumed she’d follow her parents footsteps, but she chose a different route instead.

“I wanted to be different from my parents,” she said. “When you see [my family] you think basketball. When I was in high school, I was really skinny, so I didn’t like the contact, the physicality, and everybody being meaner than me.”

“Being tall has its perks but not everybody that’s my height can play back row,” Bannister added. “I can jump and play defense, which I think sets me aside from other people that are my height.”

Bannister hopes her fourth season at LSU will be her best and characterizes this year’s team as the most complete in her career. In fact, when talking about what she’s seen in practice from sophomore middle blockers Anita Anwusi and Allee Morris, she couldn’t help but beam with excitement.

“I feel like this team can go far,” Bannister said. “I say that because we’re having people step up in different aspects of the court instead of just having strength in one area.”

“She would win a whole set by herself,” Flory added on Bannister. “To take the pressure off of her is great because now teams are going to have to game plan for other pieces. The fact that she can be successful through that is pretty incredible. That’s a testimony to how good she can be.”

A native of Missouri City, Texas, Bannister said coach Flory separated LSU from other schools during the recruiting process. Among other variables, she doesn’t like cold weather, which automatically took out some schools on her list. She also described herself as a “homebody,” so the opportunity to be a four-hour drive away from home made the decision that much easier.

In the gym, Bannister is a tone-setter. She’s not the most vocal. She won’t get up in your face. In fact, Flory says she’s pretty quiet. But she does have the ability to understand people and recognizes when somebody is struggling better than anybody on the team.

“She’s a quiet, old soul,” said Flory of Bannister. “She recognizes people that are struggling better than anybody else. She’s super insightful to people. She’s the behind the scenes worker. She never wants to be in the limelight.”

Unfortunately, the limelight tends to find her. That’s the consequence of being a star. And if that’s what it takes to hang a banner, Bannister can handle it.