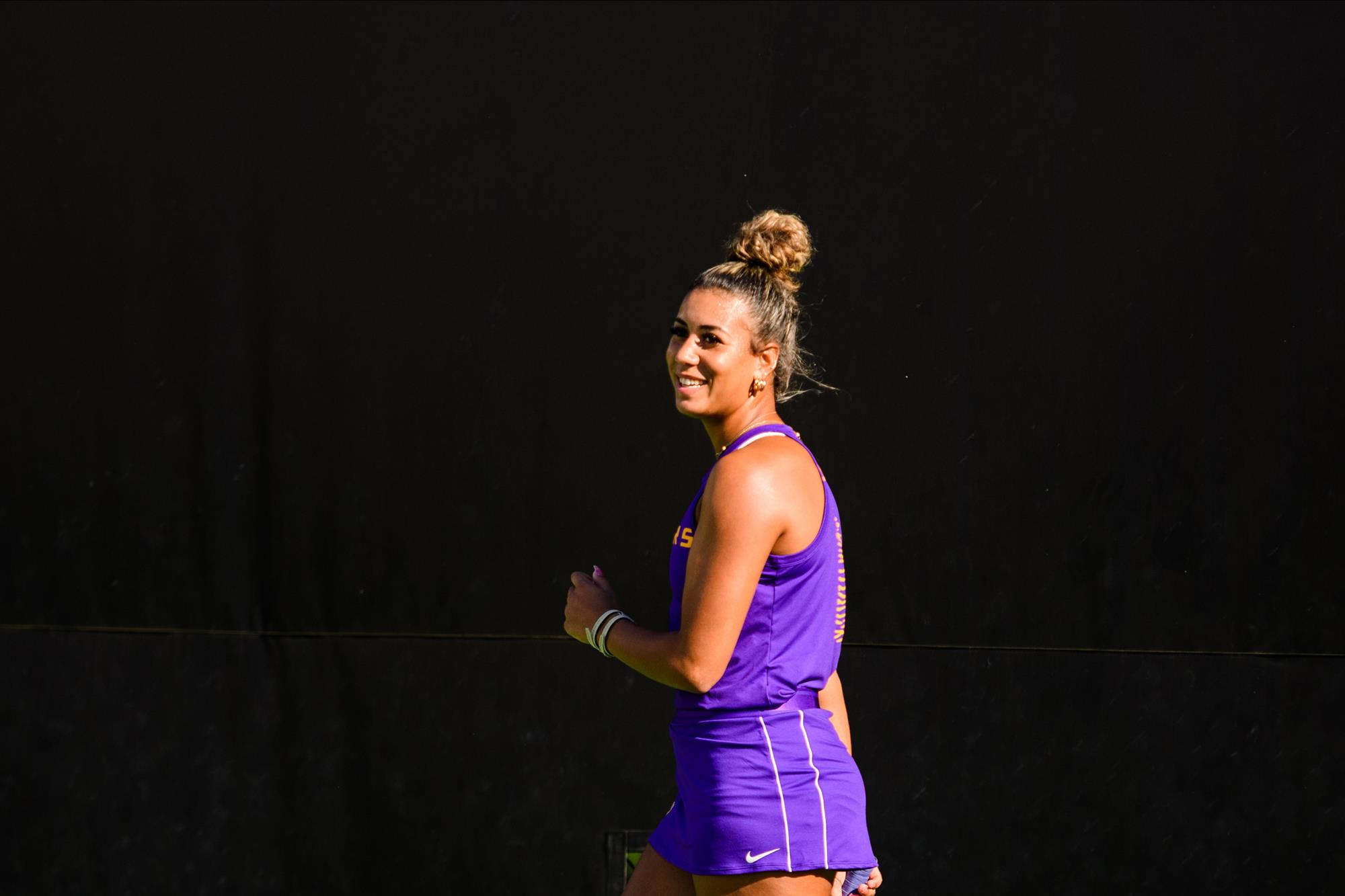 Fort Worth, TX. – The LSU women’s tennis team wrapped up its time at the TCU Invitational on Sunday evening, October 4, at the Bayard H. Friedman Tennis Center.

“Extremely proud of this group of Tigers,” co-head coach Michael Sell said. “They competed hard, picked up many wins, and grew closer as a unit. We’re thankful for the opportunity to compete their strong performance shows all the hard work they put in.”

“We also have more clarity on things to work on when we return to practice on Tuesday to best prepare us for our next competition in two weeks. We’ll be ready to get back to work.”

Seniors Taylor Bridges and Paris Corley were the first off the doubles courts, taking down Baylor’s Mel Krywoj and Alicia Herrero Linana comfortably by a score of 6-3.

Sophomores Safiya Carrington and Maggie Cubitt were in action next, taking on Jessica Hinojosa and Anastasia Kharitonova. The match went back and forth, requiring a tiebreaker to decide it. The Tiger duo held their will and only dropped one point in the tiebreaker to win the match, 7-6(1).

Sophomore Nina Geissler and freshman Samantha Buyckx were the final doubles match of the day, taking on Livia Kraus and Kristina Sorokolet. The new duo controlled the match and were able to win 6-3 to give the Tigers a perfect 3-0 record for doubles action on day one.

Carrington earned her first singles win of the season, a back and forth contest against Krywoj that saw Carrington win the first set 6-4 before repeating the score in the second set.

Corley faced Herrero Linana for her first singles match of the season. The two contested a close first set that Corley narrowly win 7-5. Corley rode momentum in the second set to a comfortable 6-2 win and earn her first singles win of the year.

Geissler also earned her first singles win of the season in a narrow three set contest against Angelina Shakhraichuk. Geissler took the first set 6-4 before Shakhraichuk equalized with a 6-3 second set win to force a ten-point tiebreaking third set. The two players were back and forth before Geissler was able to pull ahead and win the tiebreaker 10-6.

Cubitt was the final singles match of the afternoon, taking on Kraus. Kraus was able to take the first set 6-1 and repeated the scoreline in the second set to take down Cubitt.

The senior duo of Bridges and Corley earned their second doubles win of the weekend to start day two, taking down TCU’s Tate Schroeder and Stevie Kennedy in a tight 7-5 contest.

The sophomores Carrington and Cubit followed that with their second doubles win of the weekend as well, comfortably defeating the TCU team of Marie Norris and Isabel Pascual Montalvo by a score of 6-1.

Geissler and Buyckx kept the Tigers perfect record in doubles with a close 6-4 victory over North Texas’ Nidhi Surapaneni and Maria Ponomareva.

In singles, the six Tigers drew a mix of TCU and UNT players. Carrington faced TCU’s Norris in the first singles match of the afternoon. Carrington took an early lead and won the first set 6-4 before Norris struck back and took the tightly contested second set 6-4 and forced a decisive tiebreaking third set. Norris slightly edged Carrington 10-7 to get the win.

Bridges faced Schroeder for the second time on the day, this time in singles. Bridges controlled the first set en route to a 6-3 win before holding off Schroeder’s comeback attempt to win the second set 7-5 and earn her second singles win of the season.

Geissler earned her second singles win of the weekend after she took down Kennedy in a straight set wins. Both sets were narrow and extended, with Geissler edging her competition out 7-5 in the first and second.

Corley took on Polk at the next court. Corley took the first set in a close 6-4 contest. The two players traded games back and forth in the second set before requiring a tiebreaker that Corley was able to narrowly win 7-4 to earn her second singles win of the weekend.

Cubitt earned her first singles win of the season after defeating Pascual Montalvo in a straight set match. Cubitt controlled the match, winning the first set 6-3 before keeping momentum to take the second set 6-3.

Buyckx faced off against UNT’s Kexuan Zhou in the final match of the day. Buyckx started the match with an emphatic 6-0 first set win before Zhou earned a 6-4 second set win to force a third set tiebreaker. The tiebreaker was close, with Buyckx narrowly able to edge Zhou 10-8 and earn her first singles win of her collegiate career.

Oklahoma’s Carmen and Ivana Corley handed LSU its first loss in doubles on the weekend after they defeat Carrington and Cubitt by a score of 6-4.

Baylor’s Hinojosa and Kharitonovagave new team Bridges and Geissler their first doubles loss on the weekend, defeating the two Tigers 6-1.

Buyckx and Corley teamed together for the final doubles match of the weekend to take on UNT’s Matilde Magrini and Lucie Devier. The freshman and senior duo held the lead through the match and was able to take the win by a score of 6-4.

Bridges suffered her first singles defeat of the weekend after Ivana Corley defeated her 6-1 in the first set and held off a late charge from Bridges to win the second 7-5 and take the match.

Carmen Corley defeated Cubitt in their singles match. Cubitt took the first set 6-3 before Corley equalized with a strong 6-0 second set to force a tiebreaker. Corley took the lead and didn’t look back on her way to a 10-2 win to defeat Cubitt.

The next match saw LSU’s Paris Corley take on Hinojosa in a close match. Corley squeaked by in the first set, winning a tiebreaker 7-6(2) before Hinojosa equalized with a 6-4 win in the second set to send it to a ten-point tiebreaking third set. Hinojosa was able to come out on top 10-5 to give Corley her lone loss in overall play on the weekend.

Buyckx competed in LSU’s final match of the weekend, taking on Motosono from Oklahoma. Buyckx took the first set with an emphatic 6-1 win before Motosono won the second set 6-4 to send the match to a third set. The third set tiebreaker was evenly contested, going above the ten points to see Motosono narrowly edge Buyckx out by a score of 12-10.

LSU will compete in its second tournament of the fall at the Texas A&M Invitational, set to begin Friday, October 16.