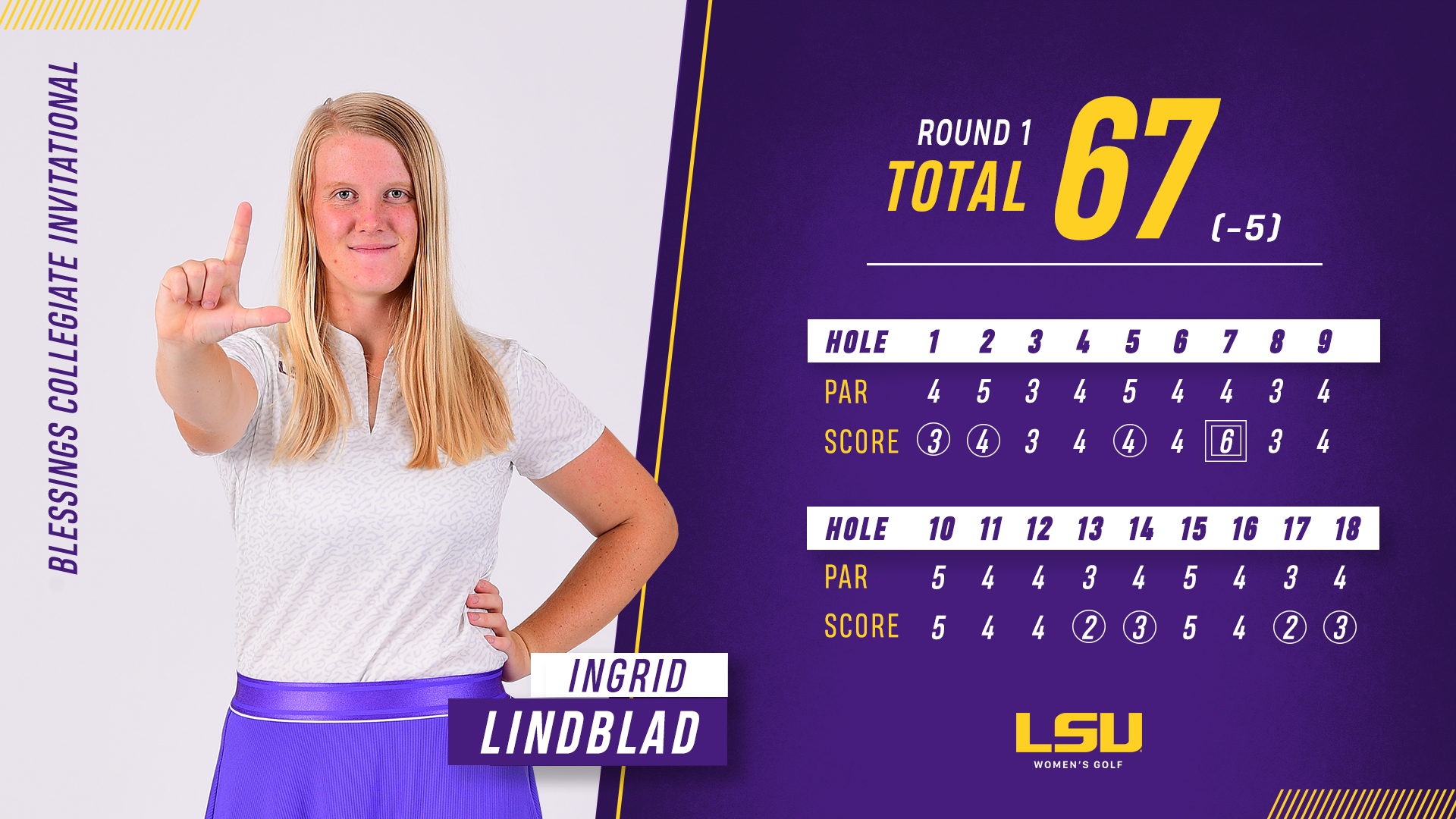 FAYETTEVILLE, Ark. – The LSU women’s golf team righted the ship pretty quickly to start the first round of the Blessings Collegiate Invitational and finished the day in second place, just four strokes off the lead, to start the 2020-21 season.

“We are off to a great start, but the day didn’t start that way for us,” said LSU women’s golf head coach Garrett Runion. “We got popped in the mouth early on the first hole, but we knew this was a difficult course and had a lot of golf left.”

LSU played the last six holes at 9-under to put themselves in contention at the top of the leaderboard with a 5-over 293 for the first round. But the round didn’t start that well. The Tigers were the first women’s team off to start competition and shot 3-over on Hole No. 1 before settling the nerves and buckling down for the rest of the round.

“I think we were a little tight and had some butterflies on the first hole, one of the hardest holes on the course. That reaction was natural because it has been seven months since we played a college tournament. Our ladies kept their composure and began to turn on the offense.”

Sophomore Ingrid Lindblad is currently tied for the individual lead with a 5-under 67 to start the season. The last time a Tiger opened the season with a 5-under 67 was in the first round of the Cougar Classic on Sept. 11, 2011 when Austin Ernst and Tessa Teachman both hit the score.

Lindblad birdied three of the first five holes before a double bogey put her at 1-under making the turn. She went on to shoot 4-under on the back nine with birdies on four of the last six holes, including birdies on 17 and 18 to move into a tie at the top of the leaderboard with host Arkansas’ Brooke Matthews.

“I did not see a 67 out there today, but Ingrid pulled off an unbelievable round, including the four birdies on the last six holes.”

Sophomore Latanna Stone and junior transfer Jessica Bailey each shot 2-over for the round and are tied for 12th place. Bailey contributed three birdies to the Tigers last six holes, while Stone contributed one.

Freshman Carla Tejedo Mulet struggled on the first two holes of her collegiate career, but bounced back with birdies on 3 and 4. She shot 6-over on the front nine and settled down on the back nine to shoot even, contributing two birdies to the team’s nine on the last six holes.

“We had the first tee time today and will have the last tee time tomorrow, so we have some time to rest, recover and get ready for another long challenging day on Tuesday.”

LSU will tee off at 11:32 a.m. from Hole No. 10 for the second round on Tuesday. Teams are competing in single groupings to maintain SEC COVID-19 protocols. Live scoring is available at Golfstat.com.

A twist to the tournament comes with combined team scoring with the LSU men’s team, also playing the same course. LSU’s combined team score is 8-over and tied for second with Tennessee. Lindblad and LSU men’s senior Trey Winstead are in first place in the coed best ball pairings at 11-under. Winstead is tied for fourth on the men’s player leaderboard. The team is currently tied for fifth and will tee off at 8:49 a.m. on Tuesday.

The Blessings Collegiate Invitational – thru Round 1