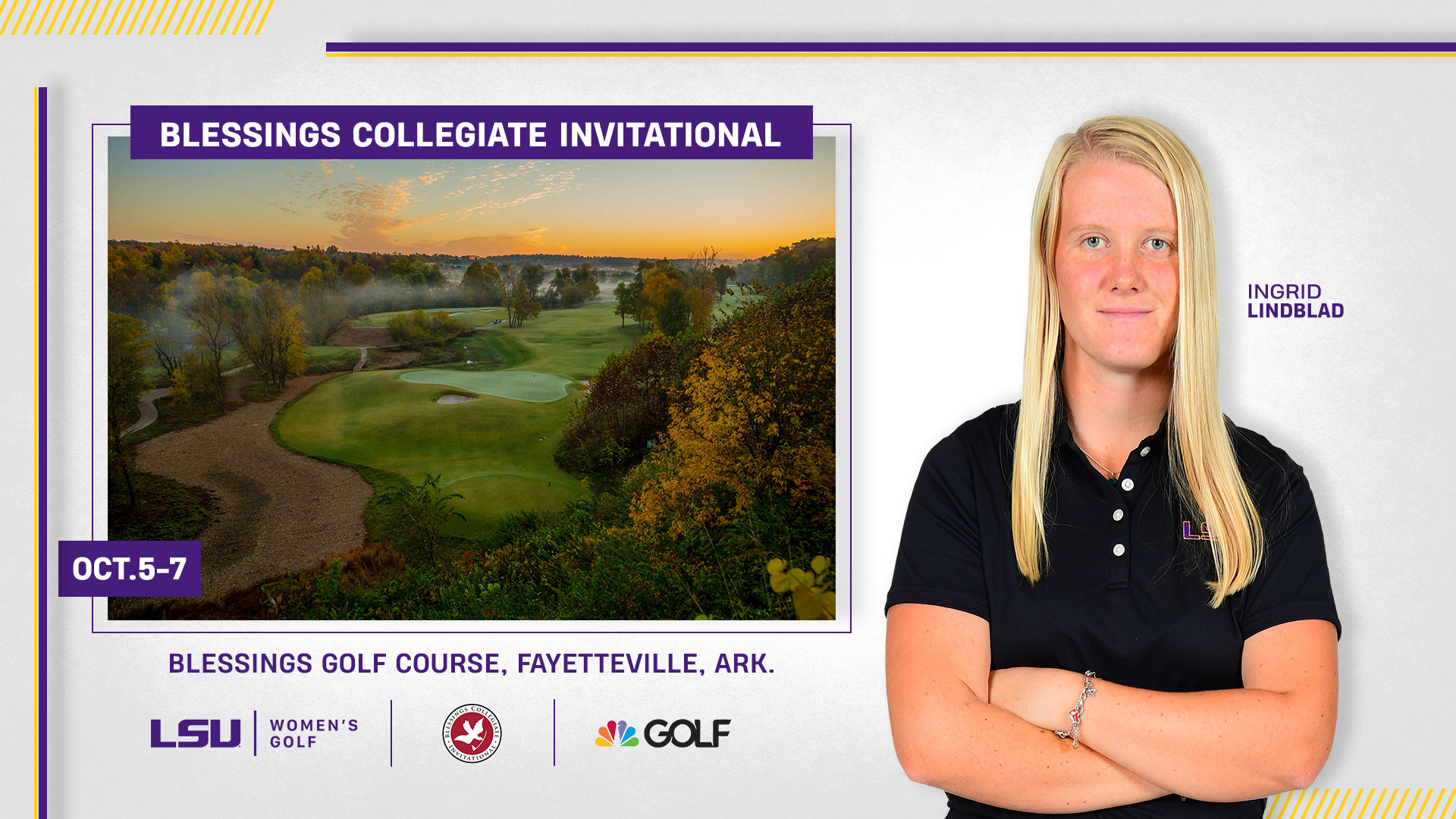 BATON ROUGE, La. — The nationally-ranked LSU women’s golf team gets the 2020-21 season started this week at the inaugural Blessings Collegiate Invitational presented by Tyson Foods in Fayetteville, Arkansas on October 5-7. The Tigers will be joined in the field by the other 13 members of the Southeastern Conference and Golf Channel will provide coverage all three days of the season-opening tournament.

The Blessings Collegiate Invitational is the first of three tournaments LSU will compete in during the Fall portion of the season. SEC COVID-19 protocols limit the field in each Fall tournament to SEC members or non-conference teams from the school’s geographic region.

“Usually we have the opportunity to play a lighter schedule to begin the season, but this Fall it is like playing the SEC Championship three times in a row,” said LSU women’s golf head coach Garrett Runion. “We need to be ready because this competition is strong and the learning curve needs to be sharp. We need to be ready from the get-go.”

LSU is coming off of one of its most successful seasons in recent history. In the pandemic-shortened 2019-20 season, the Tigers finished the season ranked No. 12 by Golfweek and No. 13 by GolfStat and won three of seven tournaments played. LSU finished in the Top-3 in six of the seven tournaments.

LSU returns its top five players from 2019-20, led by sophomores Ingrid Lindblad and Latanna Stone, members of the 2020-21 Preseason ANNIKA Award Watch List. Lindblad is one of the most decorated golfers in LSU history, finishing last season as a finalist for the ANNIKA Award and the SEC’s Player and Freshman of the Year. Following a successful offseason at home in Sweden, Lindblad is currently ranked No. 3 in the Women’s Amateur Golf Rankings (WAGR) heading into the Blessings tournament. Lindblad and Stone earned All-America honors and invitations to their respective Arnold Palmer Cup teams last season. Lindblad shot an average 70.33 strokes in her rookie season, while Stone was second on the squad at 72.56 strokes per round.

“Any time you have a player on the ANNIKA preseason watch list is a big deal, but to have two from the same team is special,” said Runion. “They are roommates and continually push each other. They also get to compete against each other in the Arnold Palmer Cup in December. I expect their leadership to carry up to the rest of the team.”

Senior Kendall Griffin provides veteran leadership on the squad and was third last season with a 73.86 scoring average. Junior Alden Wallace was the third player, along with Lindblad and Griffin, to play in all seven tournaments last season for LSU. Senior Kiana Oshiro and junior Presley Baggett also split time in the lineup last season. Senior Mary Frances Chauvin returns for her fourth season in the purple and gold.

Freshman Carla Tejedo Mulet and junior transfer Jessica Bailey join the team in 2020-21. Tejedo is a member of the Spanish National Golf Team and is ranked No. 58 in the World Amateur Golf Rankings going into the BCI. Bailey, from England, transfers in from Daytona State College, the No. 2 team in the NJCAA. She was the No. 6-ranked junior college player in the nation at the end of the 2019-20 season.

Lindblad, Stone, Griffin, Tejedo Mulet and Bailey will represent LSU in the first tournament of the season. The format will be different from the normal groupings, as the five members of each team will play in a single grouping instead of with players from other teams. The Tigers are scheduled to tee off from Hole No. 1 at 8:58 a.m. on Monday morning.

First round coverage on the Golf Channel is currently set for 3 p.m. CT with College Golf Central, followed by three hours of coverage from the day’s action at 3:30 p.m. and 7 p.m.

Fans can follow along at @LSUWomensGolf on Twitter for updates and get live scoring updates at Golfstat.com.