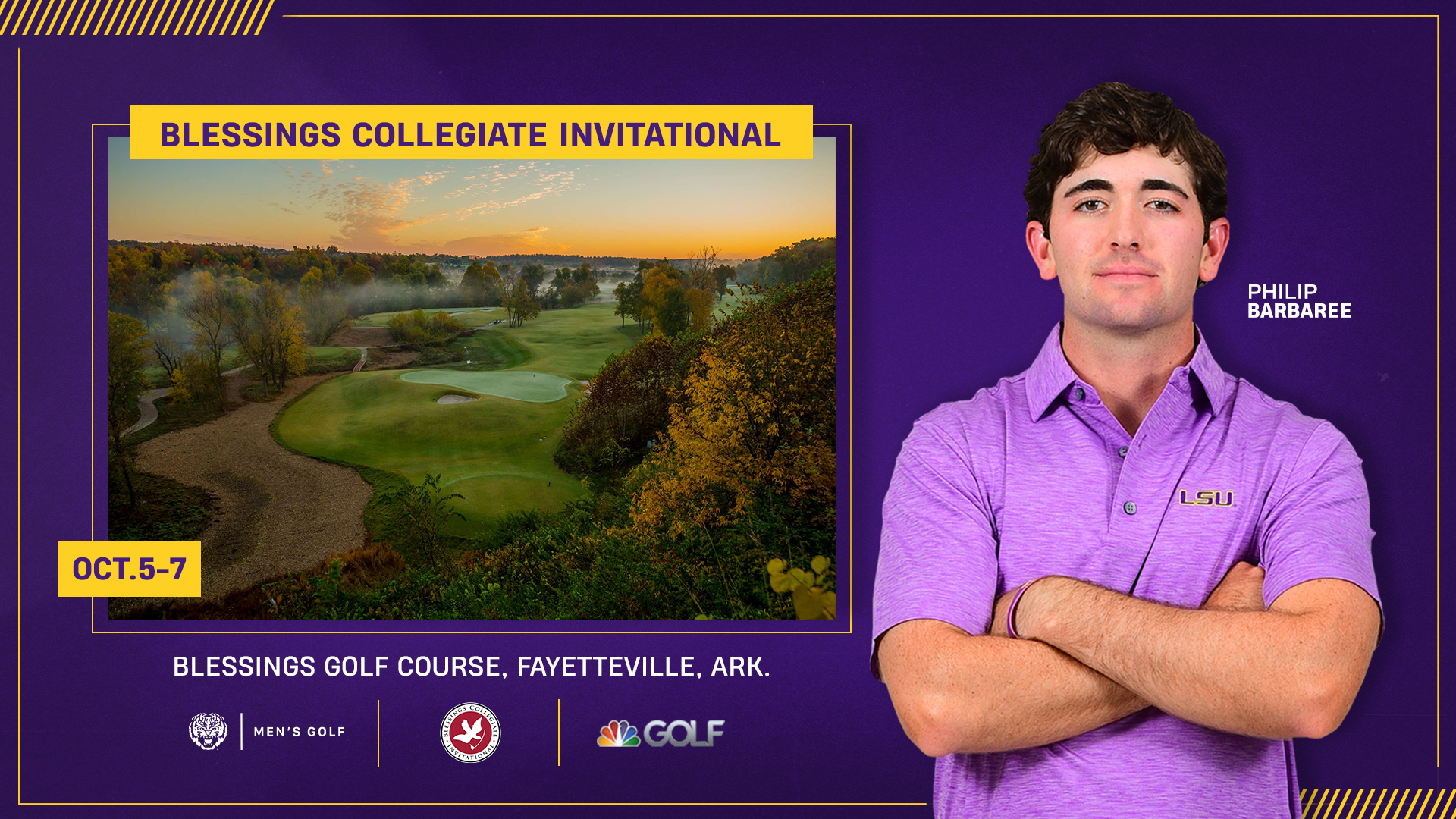 Baton Rouge, La. – The LSU men’s golf team will open up its 2020-21 season at the inaugural Blessings Collegiate Invitational; the 54-hole event taking place Monday through Wednesday. The tournament will take place in Fayetteville, Ark., at the Blessings Golf Club with action being aired on the Golf Channel each day.

“We’re extremely excited about the fall season,” Chuck Winstead, director of LSU golf, said. “Obviously with the spring being cut short last year and kind of unfinished business, we are ready to get back at it. Our guys have played some summer golf, but to be able to play with that LSU on their chest, they are looking forward to it.

“We always talk about getting better every day. That’s our mantra. It’s almost that one percent a day type of approach. We’ve got talent, we’ve got depth. The guys have performed well in our time back on campus and have already shown improvement. These three events will really show us where we stand.”

The Golf Channel will air live coverage from 2:30-6:30 p.m. CT each afternoon of play. LSU will go off the No. 10 tee on Monday morning with a tee time of 10:45 a.m. CT, and Tuesday the Tigers will go off of No. 1 at 9:12 a.m. CT. Wednesday’s final round tee times will be determined by team standings. Golfstat will provide live scoring of the event. The Blessings GC will play as a par 72 at 7,503 yards.

LSU’s five players in the play five, count four scoring format will be Garrett Barber, Philip Barbaree, Trey Winstead, Connor Gaunt, and Nicholas Arcement. Barbaree, Winstead, and Barber all have experience at the Blessings GC as they played the course for the 2019 NCAA Championships. Gaunt, a sophomore transfer from Arkansas Tech, and Arcement, a true freshman from Thibodaux, La., will be making their LSU debuts.

All three of LSU’s fall tournaments will be played against SEC opponents only. Following the Blessings Collegiate Invitational, the Tigers will head to Nashville for the Vanderbilt Legends Intercollegiate Oct. 25-27. The fall schedule will close out with the playing of the Jerry Pate Intercollegiate in Birmingham, Ala., at the Old Overton GC.

LSU will be led by the trio of Philip Barbaree, Trey Winstead, and Garrett Barber this season. Barbaree (72.24) and Winstead (72.40) enter the season with two of the top six career stroke averages in LSU history; Barbaree ranks fourth and Winstead is sixth. Barber is coming off a sophomore season in which he averaged a career best 71.43 strokes per round to lead the Tigers, a mark that ranks as the sixth lowest in LSU single season history. All three have high averages of their rounds counting towards LSU’s team scores during their careers; 86 percent of Barbaree’s rounds have counted, while both Winstead and Barber have had 81 percent of their rounds inputted in LSU’s team score.

Barbaree has 12 career top-10 finishes while at LSU in 41 events played, a mark that ranks as the 15th most in school history. Winstead has 10 top-10 showings in 30 events played, and Barber has four career top-10s at LSU. Winstead and Hayden White (Jr./Benton, La.) are the only two Tigers to have won a collegiate event. Winstead and White shared medalist honors last fall at the 2019 David Toms Intercollegiate as they shot school records of 17-under 199 to win the event. It was Winstead’s second-consecutive title at the David Toms event as he also won the title in 2018.

Michael Sanders (16 events) and Chris Woollam (7 events) are returners that also have played for LSU the past two seasons. Sanders registered two top 10s during his freshman campaign in 2018-19 with a scoring average of 72.63, and Woollam had a scoring average of 72.07 in five events played last season as a sophomore. Gaunt, Arcement, Hugo Aguilar Puertes (Valencia, Spain) and Drew Doyle (Louisville, Ky.) round out the roster as newcomers.

Winstead was named to the Preseason Haskins Award Watch List on Sept. 24. Winstead moved up to No. 45 in the World Amateur Golf Ranking this summer after some stellar play. He capped off his summer by advancing to the Round of 32 at the U.S. Amateur at Bandon Dunes in mid-August. He was a quarterfinalist at the North And South Amateur Championship in early July, a Round of 16 participant at The Western Amateur Championship, and he placed solo third at the Sunnehanna Amateur with a four round total of 10-under 270. The preseason list for the Haskins Award features 20 collegiate golfers that are playing this fall, and then an additional 10 that are set to play in the spring. A full list of honorees can be viewed at golfchannel.com.