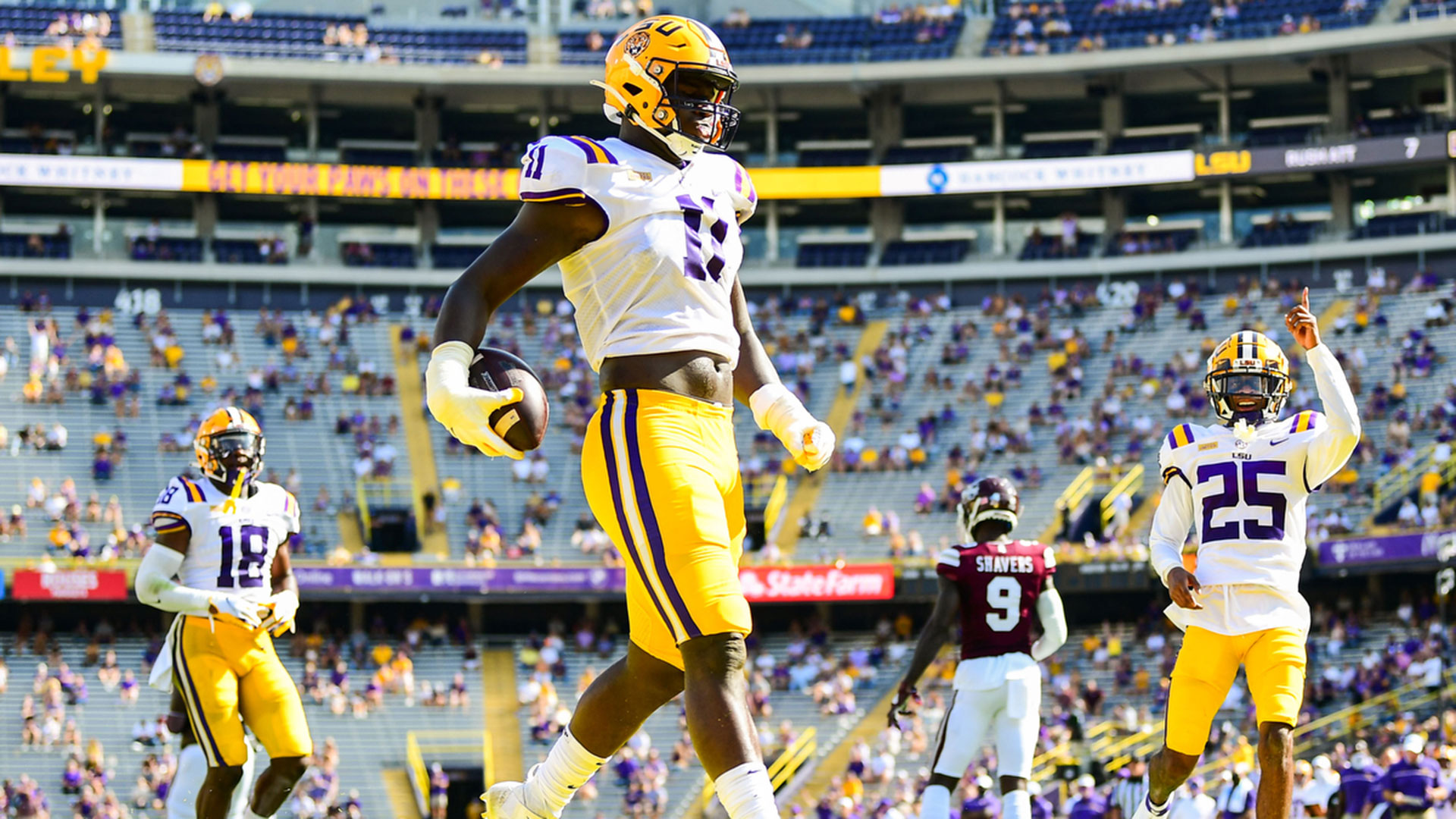 This is clearly terrible editorial judgment on my part. I opted out of an undefeated national championship season, only to opt back in after the first LSU loss in 672 days.

When they call me a sunshine pumper, you point them to this column. Let’s jump in.

I said this on the Hurry Up after the game, and I’ll say it here: I’m so glad football is back.

Am I happy about the result or the performance? Of course not. But I’ll take LSU football – win, lose, or draw, 25 percent capacity or 100 percent – over no football at all.

When the band played the first four notes – from the north end zone instead of the 50 yard line – I got goosebumps on my skin and a lump in my threat. And when they sang the Alma Mater acapella to an empty Tiger Stadium afterward, I choked back a tear or two.

Seriously! I did! I’m not usually one to get emotional over sports, but it was the first time I’d heard the song sung since the moments after the national championship game, when the entire Superdome belted it out at full blast. The contrast between that moment and this one – thousands of voices versus dozens, after the highest of highs and after the lowest of lows – well, it got me.

Welcome back, football. You broke my heart on Saturday, but I’m just glad you’re here for the fall.

The Beginnin’ for Brennan

Okay, on to the game.

All eyes were always going to be on Myles Brennan, who made his first career start after three seasons as LSU’s backup quarterback.

In 85 snaps, Brennan showed much to work with and much to work on in the Tigers’ 44-34 defeat to Mississippi State. His 345 yards, 27 completions, and 46 attempts were all the highest by an LSU starting quarterback on his debut.

Yes, Brennan threw two interceptions and completed less than 60 percent of his passes. But the interceptions weren’t entirely his fault – one was a final heave into the end zone as time expired; the other, a defender hit his arm in the throwing motion, causing the pass to fall short. And with four drops, four throw-aways, and one batted pass, Brennan’s adjusted completion percentage (77.5%) reveals higher accuracy than the box score would reflect.

“My hat’s off to Myles, man,” said Terrace Marshall Jr., who caught 8 passes for 122 yards and two scores. “Everybody’s looking at the expectation with what Joe (Burrow) did (last year). You can’t look at that. Myles has got his own era.”

In total, Brennan had more time (2.87 seconds) to throw on average than any other quarterback in the SEC on Saturday, but he still took seven sacks. He said after the game that “the offensive line busted their butt all game” and that he wanted to work on pulling the trigger quicker.

“I’d say the first thing is making sure I’m not holding on to the ball too long,” Brennan said after the game on Hey Fightin’ Podcast. “We have to go back and make sure my protection checks were good, and we just have to make sure we’re all on the same page.

One area LSU might re-tool to relieve some pressure on Brennan is the running game and the play action off of it.

The Tigers came out of the gates gunning on Saturday, throwing on 10 of 14 first downs in the first half (71%) compared to four runs (29%) while struggling to generate offense. After halftime, they adjusted to 14 passes (58%) and 10 runs (42%) on first down in the second half, keeping the Bulldog defense more honest.

For the game, on all downs, LSU called 58 passes and 27 runs, and Ed Orgeron thinks his backs could be in for more work moving forward.

“We came out in the second half, and we needed to establish the line of scrimmage,” Orgeron said. “You can’t drop back to pass every time and not run, especially with the three great running backs we have. We’re going to have to run the ball.”

The Tiger backs made the most of their carries. LSU’s rushers generated 93 yards after contact vs. State (Ty Davis Price: 35; Chris Curry: 23; Emery: 17). Emery led all backs with four avoided tackles on just seven carries.

It’s an area where LSU is still looking for an identity after the departure of Clyde Edwards-Helaire to the NFL, but Orgeron feels like the talent is there.

“We had one running play last year,” he said. “We had inside zone. Clyde made everybody miss and made plays. This is a different year. That’s not to say we don’t have that running back. But we have to find things this year that this team does well.”

LSU’s defensive struggles were easy to see against Mississippi State. When you give up 623 passing yards, there’s not much to say about the secondary play except that it has to get better.

Leading the way was Ali Gaye. The junior college transfer totaled 11 pressures, nine hurries, one sack, one QB hit, and two batted balls, and even those numbers may not do his day justice.

“We have seen it in practice,” Orgeron said. “Ali came and just started making improvements. We saw it in camp. He just kept coming and coming.”

Monster night for Ali Gaye in his LSU debut:

Orgeron said Gaye could end up being a first round pick in the NFL Draft. After entering camp under the radar, he’s now on the radar of every opponent LSU faces the rest of the way and every NFL scout who comes to see the Tigers play.

“Hopefully he stays for two years,” Orgeron laughed. “Don’t get too good.”

Safety JaCoby Stevens was also key in LSU’s attacking style of play. He played as more of a linebacker, with 43 of his 72 snaps in the box. It worked: Stevens became the second Power 5 player in the last 20 years with two sacks, two fumble recoveries, and one forced fumble in the same game.

After the game, he was vocal about the defensive failures. Yes, Derek Stingley was out, leaving half of the field that’s usually locked down up for grabs. Yes, LSU was missing more than 3,500 snaps from last season’s secondary – more if you consider Stevens’ movement toward the line of scrimmage. But Stingley or not, Stevens isn’t going to live with 600 passing yards allowed, no matter how young LSU’s secondary was Saturday.

“The best thing we can do right now is not point any fingers, but go attack the problem, not the people,” he said.

“It’s time to step up. You’re not a young guy anymore. You represent in Louisiana, you’re playing for LSU. So there’s no young guy mistakes out there. We try our best to keep them calm, keep them level headed. But as the game goes on, that rookie tag or that freshman tag has to come off.”

LSU’s offense looked lost early, in need of a playmaker to step up and provide a spark.

Jaray Jenkins would’ve have been the betting favorite to assume that role, but he stepped up and made it his. His 47-yard catch in the second quarter set the stage for LSU’s first offensive touchdown, and he caught everything thrown his way Saturday.

My favorite stat from above: his run block grade. Want to stay on the field? Do the little things.

Jenkins did just that, with some big things mixed in.

The 623 yards LSU gave up in the passing game were the most in SEC history. But 383 of those came after the catch. “Obviously that’s tackling,” Orgeron said. “That’s assignments to any guys running free. We gotta work on our coverage. We had some mistakes in our coverage in leverage and technique and assignments.”

“The championship is over. This is a new season, a new team. We knew that. Now we definitely know that.” – Ed Orgeron

“Attack the problem, not the people.” – JaCoby Stevens

“Going into the game, we knew they were going to have a lot of under routes going. So I just wanted to jump the under route. We knew that we had to play man to man a lot this game, and losing a couple guys hurt. But overall, just having that pick and just having the momentum change during the first part felt very great to just start off the 2020 season with a pick six.” – Jabril Cox, who became the fourth Tiger since 1951 to score the first touchdown of the season on a pick six.

“Stick together. Don’t panic. Believe in each other. That comes from me.” – Ed Orgeron

Ed Orgeron on Derek Stingley: I expect him back as early as maybe tomorrow. pic.twitter.com/f7kccrjsQd