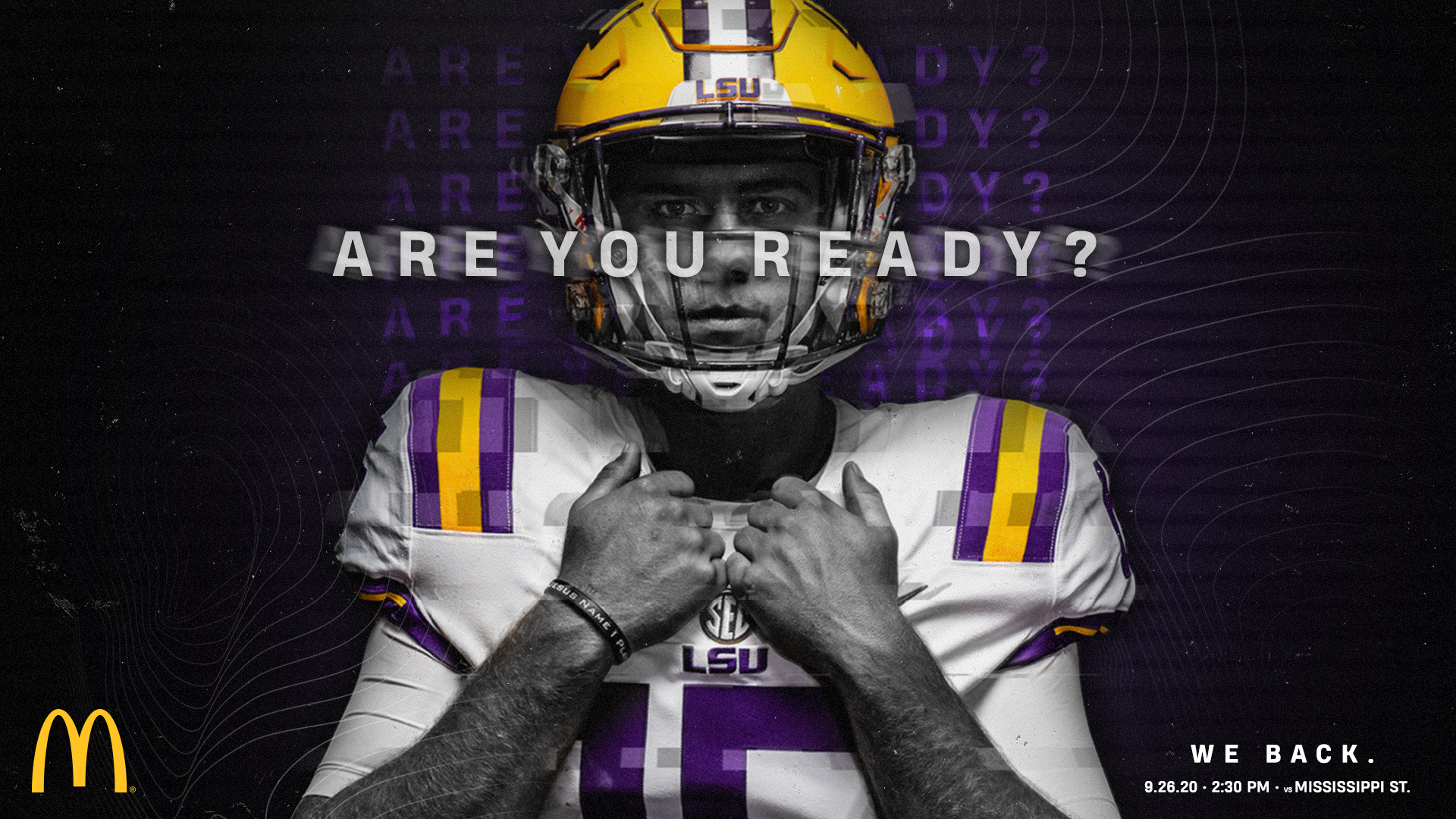 The wait is over.

For a team looking to defend its title. For a group of returners ready to emerge into new roles. For a class of newcomers hoping to make an immediate impact. For a coaching staff eager to start the season off on the right foot. For a fanbase who wondered if this football season would ever come.

Wonder no more. Football is back.

Opportunity is knocking.
And it has one question to ask…

Nine months after claiming the program’s fourth-ever national championship and 12th SEC title, the Tigers return to the field to take on Mississippi State in Tiger Stadium. Kickoff is set for 2:30, and attendance is capped at 25 percent capacity, a safety precaution due to the COVID-19 pandemic.

No. 5 LSU returns eight starters and 41 letter-winners from its undefeated national championship squad. New starters primed to write their own stories in Baton Rouge take over the reins of an offense that led the nation in points per game (48.4) and yards per game (568.4) under returning coordinator Steve Ensminger.

Junior quarterback Myles Brennan is set for his first career start. The Ocean Springs, Miss. native has appeared in 17 games as a Tiger, throwing for 600 yards and two scores.

Brennan will have plenty of talent to distribute the ball to. Wide receiver Terrace Marshall (58 receptions, 863 yards, 13 TDs in two seasons) is a preseason All-SEC pick, while freshman tight end Arik Gilbert will be counted on to integrate into the passing game quickly. So, too, will freshman wideout Kayshon Boutte and junior Racey McMath (285 yards, 3 TDs in 2019).

“I think Chris is going to be the first back in, but I consider him, Tyrion and John all starters,” Orgeron says. “Throughout the camp, if I had to say there was a lead back, it would be Chris Curry. I think he had a tremendous camp, but so did the other two guys. They’re very explosive. If we have one strength on our offense, we feel that it is the running back group led by Kevin Faulk, who’s done a tremendous job.”

Tackle Austin Deculus and guard Ed Ingram provide stability along the offensive line, as will left tackle Dare Rosenthal, who played 229 snaps in 2019. Guard Chasen Hines has played in 18 games, and Harvard transfer Liam Shanahan takes over at center.

Defensively, the Tigers will line up in a 4-3 under Bo Pelini, back as LSU’s defensive coordinator for the first time since leading the program to the 2007 national championship.

Consensus All-American corner Derek Stingley (6 INTs in 2019) and All-SEC safety JaCoby Stevens (one of two players nationally with 3 INTs, 5 PBUs, and 5 sacks in 2019) lead a loaded secondary. Sophomore corner Cordale Flott allowed just 34.6 percent of throws his way to be caught in 2019 and can play outside or in the nickel for the Tigers, while veteran safety Todd Harris and sophomore Maurice Hampton give depth and versatility at the back of the defense.

Three-time FCS national champion and All-American linebacker Jabril Cox will start alongside No. 18 Damone Clark at linebacker, while returning starter Glen Logan holds down a four-man front on the defensive line. It’s a defense that looks to be more attack-minded under Pelini.

“We are so much better on defense right now than any part of the season last year,” Orgeron says. “I feel Bo Pelini has come in and he’s brought a new energy, a new excitement and the 4-3.”

LSU opens a 10-game schedule consisting entirely of SEC opponents with Mississippi State, who will move to the Air Raid passing attack under head coach Mike Leach. Stanford transfer KJ Costello is in line to start under center, while All-SEC running back Kylin Hill provides a weapon in the run game as well as a receiver out of the backfield. First-year defensive coordinator Zach Arnett will lean on senior Erroll Thompson, the only active SEC player with 200 career tackles, to lead a new-look defense.

“I have a lot of respect for Mississippi State,” Orgeron says. “We’ve played them a bunch. Those men are very tough. They love football. They’re going to be very well coached. So it will be a tremendous challenge for our football team.

Wherever you’re watching on Saturday afternoon it will finally feel a little normal. The Tigers are back! pic.twitter.com/B0NacsiD9S