Patience Pays Off for New No. 18s Chris Curry and Damone Clark 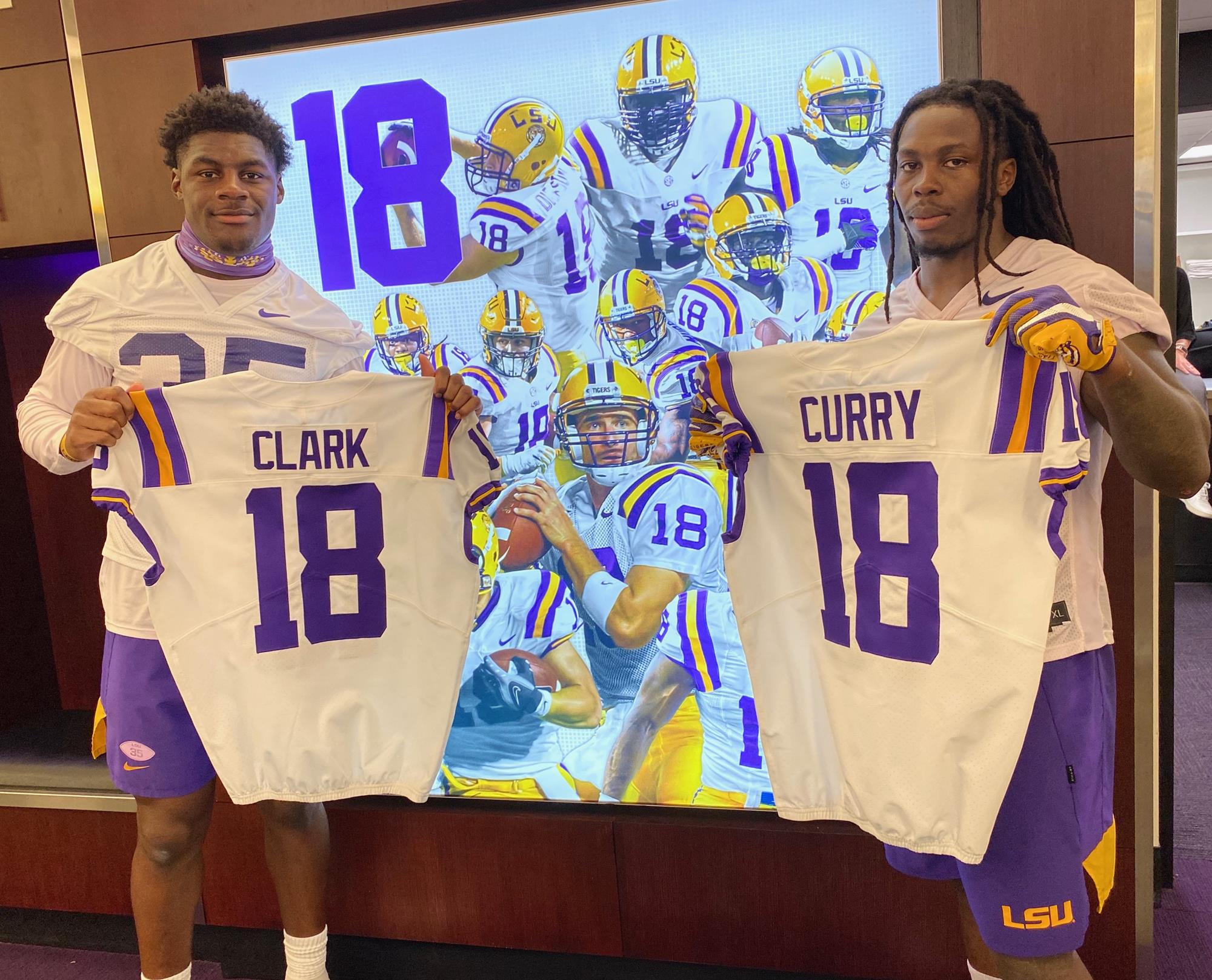 Wearing the No. 18 isn’t the only thing Damone Clark and Chris Curry share in common.

They both waited their turn. They both battled their way up the depth chart. They both used hardships of the past as fuel for the future. But on the eve of the 2020 season – a year in which many expect them to emerge as stars – they couldn’t be more eager to finally write their own story.

The two were roommates their freshman year. They’ll admit it; they considered transferring. Both stepped on campus as four-star prospects out of high school, and being on the sidelines during games was not something they were used to.

But through adversity, they turned to each other. They made sure to stay level-headed and not make any decisions they would ultimately regret. In an era where transferring has become trendy, they showed maturity at a time of tribulation.

And they reaped the benefits. Two years and one national championship ring later, their names are now etched among a lineage of leaders in an exclusive club to wear the No. 18 at LSU. It’s a brand that carries weight and a number that places a new burden of leadership upon them.

For them, the honor came as a surprise. But if you asked the rest of their teammates, they’d tell you the number went to its rightful owners.

“Never in a million years did I think I would wear 18,” Curry said. “Coming from Florida and not playing a ton last year, just praying I could make a difference on the team … Having 18 means the world to me.”

The most notable thing about Clark and Curry getting 18 is they both realized how deserving the other person was of getting it. Through all those long nights and battles at practice, this honor was especially humbling.

“It’s still surreal right now,” Clark said on being awarded 18. “Honestly, I thought Chris deserved it with everything he went through. Anybody that’s weak-minded could have easily left.”

Weak-minded would be the last descriptor to apply to either one of them.

Originally from New Orleans, Clark moved to Baton Rouge in 2005 as a five-year-old following Hurricane Katrina. He doesn’t remember much from his days in New Orleans. In fact, he says his parents, Damon and Katice, correct him every time he says he’s from Baton Rouge.

But having resiliency and toughness isn’t just something Clark exhibits on the field. They are characteristics that he’s been forced to manifest his entire life.

“I had it hard growing up,” Clark said. “Hurricane Katrina and the floods of 2016 made me toughen up. It showed me that everything wasn’t promised. We lost everything we had – twice. We just had to start over again.”

From that moment forward, Clark made a promise to his mom. He told her he would graduate high school, play football in college and get his diploma. He’s on track to complete all three among other accomplishments.

Clark is a grinder. After practice he goes straight to the film room. He admits there are days when he doesn’t feel like doing these things. But then he thinks of his family and does it.

“Whatever I have to do to make it and be successful, I don’t mind doing it,” he said. “I’ve got the right guys around me like JaCoby [Stevens] and Jabril [Cox] continuing to push me.”

Playing in all 15 games in 2019, Clark recorded 50 tackles with 3.5 sacks. Now, as a starter alongside Jabril Cox at inside linebacker, he’s only scratched the surface of his full potential. He follows in the footsteps of three NFL draft picks, but he doesn’t want your comparisons. He just wants to be the best Damone Clark he can be. That’s the personal goal he’s set for himself.

For Curry, his big moment came in last year’s College Football Playoff semifinal against Oklahoma. He was a veteran in the running back room, but the playing time wasn’t there yet.

But when Clyde Edwards-Helaire was forced to sit out with a hamstring injury, Curry finally got the call he’d been waiting for and took advantage. The 5-foot-11 back, who draws comparisons to Marshawn Lynch for his downhill and violent rushing style, posted his best performance as a Tiger with 89 yards rushing on 16 carries.

Curry didn’t find out he was getting the start until the morning of the game. In fact, earlier in the week, he went up to Joe Brady and asked him what he needed to work on to touch the field. Brady advised him to be patient and when his number is called, expect to contribute.

He wouldn’t have to wait long. A week later, the morning of the Peach Bowl, Brady took Curry to the side and reminded him of that conversation, telling him that moment was now. Even quarterback Joe Burrow was vocal with the coaching staff about how Curry had earned the opportunity to start, and Curry showed his appreciation to his QB in a tweet after the game.

Within hours of the biggest moment of his football life, Curry didn’t even have time to tell his family. During the game, he ran like he had something to prove, because he did. He just happened to make his statement in LSU’s biggest game of the season to that point. Even when Curry felt like most people forgot about him, he says, “if you want something bad enough, you’ll be willing to fight for it.”

A Fort Myers, Florida native, Curry’s hometown has no shortage of football talent. The city is home to superstars like Deion Sanders, Sammy Watkins and Jevon Kearse.

Curry admits he also went through a lot in his community growing up. But his biggest inspiration is to show the kids in his area that if you work hard, you can make it big one day. That’s his motivation – even still to this day.

For Coach O and staff, there were a handful of players worthy of the prestigious No. 18, but only two checked every box.

“We had a lot of men that were very deserving, but these men fit all the categories and graded the highest in all the categories that we judged them in,” said head coach Ed Orgreon. “Those two young men are tremendous leaders and great LSU Tigers, both of them fought through adversity.”

With LSU set to take the field tomorrow against Mississippi State, the patience has paid off for LSU’s 18s. Good things do, in fact, come to those who wait, but for Curry and Clark, the wait is over. Their rewards are ready for reaping.