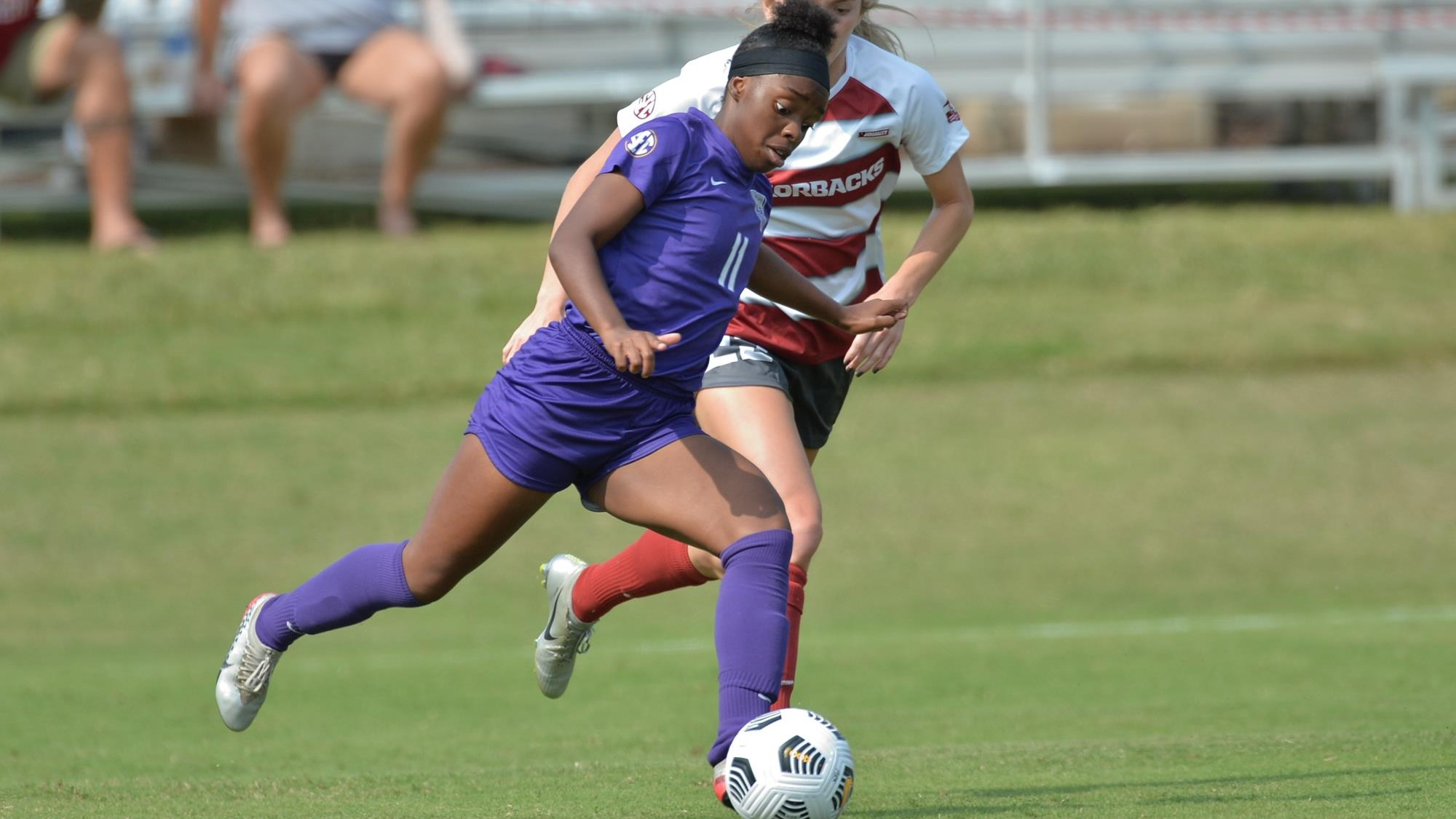 Fayetteville, Ark. – The LSU soccer team showed promising effort in its first contest of the 2020 season under first year head coach Sian Hudson on Saturday at Razorback Field. The Tigers lost the match by a tally of 2-0 to the preseason favorite to win the league, the Arkansas Razorbacks.

“Overall I was really pleased with our performance today,” Hudson noted on her team’s effort. “Arkansas is a team that poses a lot of hard questions in terms of the way they press and put balls into the box. I thought we built out of the back well at times, stretched them defensively, and competed well in the aerial battle.

“We were able to create four to five big chances that we didn’t capitalize on. If we score one or two of those chances we had in the first half, I think it shifts the game in a big way. It was great for us to finally get a chance to compete with somebody besides ourselves. There were plenty of positive signs in terms of fight, belief, and playing our style of soccer here at LSU.”

LSU came out as the attacking side and controlled the match for a large majority of the first half. A couple of early chances could have swayed the tide in favor of the Tigers, but LSU was unable to cash in a few early opportunities.

The first solid chance came after Shannon Cooke played a long ball into the right side of the 18 for Tinaya Alexander. Alexander possessed shortly before playing a perfect ball to Wasila Diwura-Soale, who proceeded to one touch the ball with her right foot, but the shot sailed high. The second chance came after a tremendous build up, and it was once again Cooke playing a delicately placed through ball in for Rammie Noel. Noel held her defender on her hip as she progressed towards the net and actually beat the keeper, but the ball caromed off the right post instead of into the back of the net.

Arkansas scored in the 35th minute off a free kick from near midfield as Reagan Swindall flipped in a ball from just outside the 6 for the goal. The Razorbacks added their second goal of the match in the 56th minute as Parker Goins found the back of the net.

Sophomore Mollee Swift made her first start in goal for LSU and made seven saves. Swift was one of three players to earn their first start for LSU today as she was joined by first time LSU starters Diwura-Soale and redshirt freshman Taylor Dobles. Jordan Johnson and Savannah Mills also made their LSU debuts.

LSU kept its foot on the gas pedal and had a couple of late chances as well. Alexander had an attempt from 14 yards out from the left side of the box with her left foot saved in the 70th minute, and Dobles penetrated the left side of the box in the 72nd minute to have her shot saved. Freshman Jordan Johnson followed up with another attempt, but that sailed wide.

In the 86th minute, Alexander drew a penalty in the box and was rewarded a penalty kick. Her attempt from the spot hit the crossbar and Cooke’s follow up shot sailed high. The final chance of the match came in the 89th minute as Maddie Moreau possessed the ball deep in Arkansas territory. Her cross made it through to Jordan Johnson, but both of Johnson’s shot attempts were blocked.