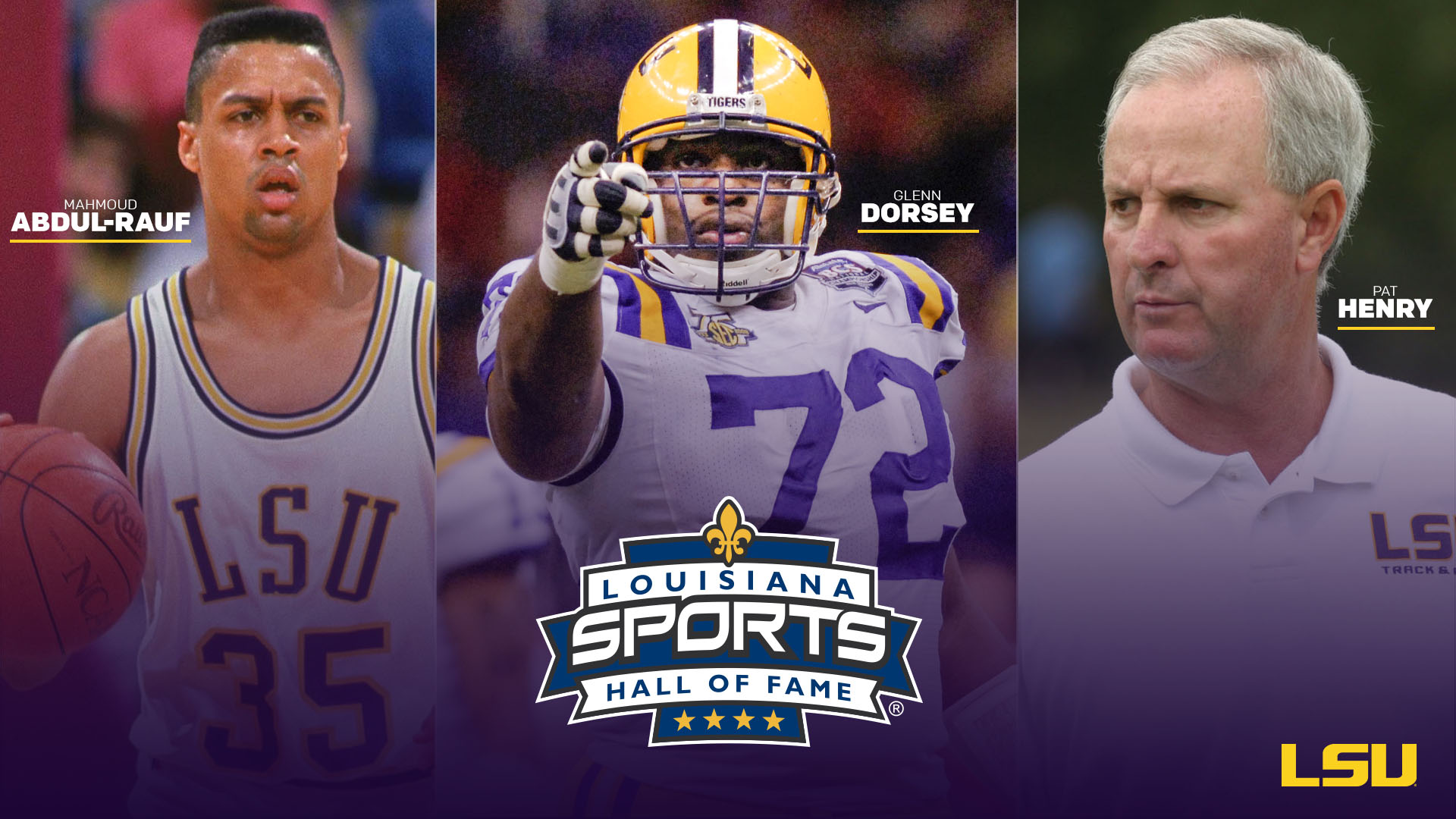 NATCHITOCHES – Two of LSU’s most gifted athletes – basketball star Mahmoud Abdul-Rauf and football standout Glenn Dorsey – along with dynamic former LSU track and field coach Pat Henry are part of the headliners of the eight 2021 competitive ballot inductees chosen for the Louisiana Sports Hall of Fame.

The announcement was made on Thursday by the LSHOF and the Louisiana Sports Hall of Fame Foundation.

The Class of 2021 will be enshrined Saturday, June 26, in Natchitoches to culminate the 62nd Louisiana Sports Hall of Fame Induction Celebration, June 24-26.

However, Freeze and Henry will enter the hall this winter, Dec. 15-17, during the 2020 Induction Celebration which was postponed from its traditional June dates due to the coronavirus pandemic. Eight-time Mr. Olympia world bodybuilding champion Ronnie Coleman, chosen for the Class of 2020, will be inducted next summer due to a scheduling conflict in December.

Abdul-Rauf had instant impact as a high-scoring guard for LSU and was the Southeastern Conference Player of the Year in each of his two seasons with the Tigers (1988-90). In nine NBA seasons, he averaged 14.6 points and then played many more seasons internationally before LSU retired his No. 35 jersey last season in ceremonies at the Pete Maravich Assembly Center.

Abdul-Rauf set an NCAA record for points (965) and scoring average for a freshman in the 1988-89 season, averaging 30.2 points per game. He was also a first-team All-America in both of his LSU seasons. Abdul-Rauf was the third pick in the 1990 NBA draft by the Denver Nuggets.

Dorsey, a Gonzales-East Ascension product, is the most decorated defensive player in LSU football history and helped the Tigers win the 2007 BCS national championship. A two-time All-American defensive tackle, he was SEC Defensive Player of the Year and earned the Outland Trophy, Lombardi Award, Nagurski Trophy and Lott Trophy among other top national collegiate honors playing for 2019 LSHOF inductee Les Miles.

He was drafted by the Kansas City Chiefs with the fifth overall pick in the 2008 NFL Draft. He played eight seasons with the Chiefs and the San Francisco 49ers.

Henry is one of the most successful track and field coaches in NCAA history. He led LSU’s men’s and women’s teams to a combined 19 SEC titles and an amazing 27 NCAA indoor and outdoor team championships during a remarkable 17-year run from 1988-2004, and since then has been head coach at Texas A&M, building the Aggies’ program into a national power.

In 1989, Henry became the first coach in NCAA history to win both men’s and women’s track and field national championships at the NCAA Outdoor Championships. In 1990 his LSU squad repeated the feat and Henry was the only coach to claim consecutive double NCAA titles until he achieved the accomplishment again at Texas A&M in 2009 and 2010. In his final year at LSU in 2004, LSU became the first school in NCAA history to sweep the men’s and women’s national team crowns at the NCAA Indoor Championships.

Colston, a seventh-round 2006 draft pick, made the NFL All-Rookie Team as he and new Saints quarterback Drew Brees began an extremely productive partnership that was a key in the Super Bowl XLIV championship season. In 10 seasons, Colston set Saints records with 711 receptions for 9,759 yards and 72 touchdown catches.

Weeks set two NCAA Division I career hitting records still on the books with a .465 batting average and a .927 slugging percentage under 2019 LSHOF inductee Roger Cador at Southern, winning the 2003 collegiate player of the year awards. He played 14 major league seasons and was the National League’s starting second baseman in the 2011 All Star Game.

Blades-Rogers was a four-time All-State pitcher at Baton Rouge’s Belaire High School who set an NCAA career record with 1,773 strikeouts in 1,261.2 innings pitched in two seasons apiece at Nicholls and USM. After earning Southland Conference Pitcher of the Year honors as a sophomore in 1998, she followed her head coach to USM and pitched the Golden Eagles to the Women’s College World Series in her final two seasons while earning first-team All-America accolades both years, winning the 2000 Honda National Softball Player of the Year award.

Freeze, who will become the oldest-ever person inducted at age 93, had a 116-23 (.834) coaching record from 1954-67 after starting the Richwood program. The Rams won a record 56 straight games and four consecutive state titles. As an athlete at Grambling, he was unbeaten on the mound in his career and pitched the Tigers to the national NAIA championship before going to spring training with the Brooklyn Dodgers featuring Jackie Robinson and Pee Wee Reese.

Dowden’s 1980 Bassmaster Classic win came on the St. Lawrence River after he was second in 1976 and third in 1977, highlighting 14 appearances in the Super Bowl of professional bass fishing. He was in the money in 57 percent of the tournaments he entered, including 99 of 241 on the BASS Tour.

The 2021 Induction Class will be showcased in the Louisiana Sports Hall of Fame Museum, operated by the Louisiana State Museum system in a partnership with the Louisiana Sports Writers Association. The striking two-story, 27,500-square foot structure faces Cane River Lake in the National Historic Landmark District of Natchitoches and has garnered worldwide architectural acclaim and rave reviews for its contents since its grand opening during the 2013 Hall of Fame induction weekend.

The eight new competitive ballot inductees will raise the total of Hall of Fame members to 358 competitors honored since the first induction class —  baseball’s Mel Ott, world champion boxer Tony Canzoneri and LSU football great Gaynell Tinsley — were enshrined in 1959 after their election a year earlier.

Also, to be spotlighted next summer will be three other Hall of Fame inductees, the winner of the 2021 Dave Dixon Louisiana Sports Leadership Award, and recipients of the 2021 Distinguished Service Award in Sports Journalism presented by the LSWA. Those inductees from contributor ballots will be announced later this year.

The complete 11-person Class of 2021 will swell the membership in the Hall of Fame to 456 men and women, including 358 from the competitors’ ballot.

The 2021 Induction Celebration will kick off Thursday, June 24, with a press conference and reception. The three-day festivities include two receptions, a free youth sports clinic, a bowling party, and a Friday night riverbank concert in Natchitoches. Tickets for the Induction Dinner and Ceremony, along with congratulatory advertising and sponsorship opportunities, will be available early in 2021 through the LaSportsHall.com website.

Anyone can receive quarterly e-mails about the 2021 Induction Celebration and other Hall of Fame news by signing up on the LaSportsHall.com website.

The 2020 and 2021 Induction Celebrations will be hosted by the Louisiana Sports Hall of Fame Foundation, the support organization for the Hall of Fame.  The LSHOF Foundation was established as a 501 c 3 non-profit entity in 1975 and is governed by a statewide board of directors.  For information on sponsorship opportunities, contact Foundation President/CEO Ronnie Rantz at 225-802-6040 or RonnieRantz@LaSportsHall.com.  Standard and customized sponsorships are available.