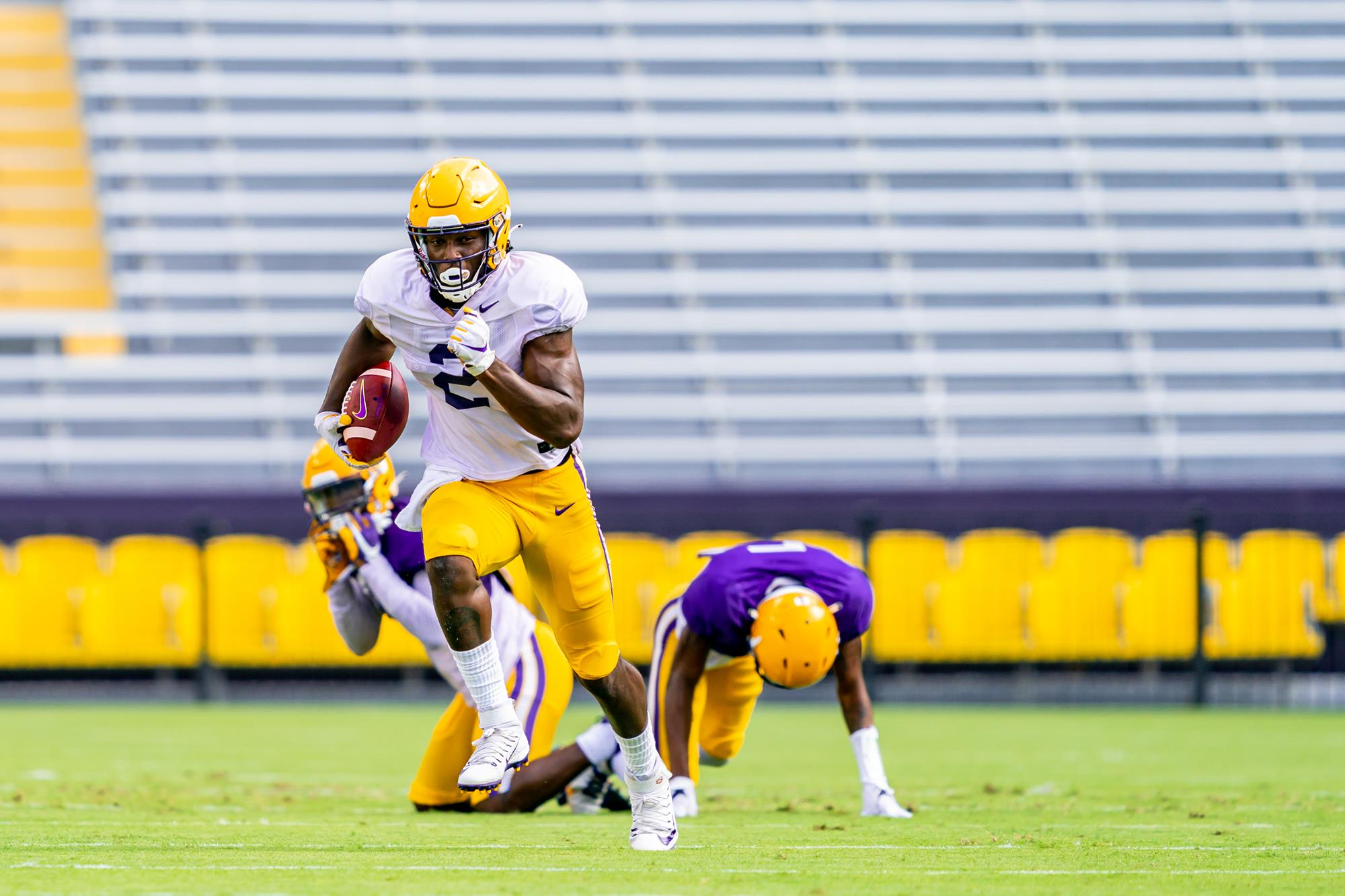 There was plenty of truth to share on LSU’s first Tell the Truth Monday of the fall.

Ed Orgeron‘s Tigers completed their first scrimmage in Tiger Stadium last Friday, and Monday’s return to practice was spent adjusting, correcting, and preparing for the season ahead.

Not every truth was a harsh one, though – Orgeron found a lot to like in his team’s first preseason game.

Practicing in Tiger Stadium brings out a different energy pic.twitter.com/J4jQbnBk2E

“All these preseason games are designed, although we’re going to get each other, to give the feeling of a game, get prepared for a game and see how we do on the live action,” Orgeron said. “I thought our team did very well, on both sides of the ball.”

While the program did not release statistics from Friday’s face-off, Orgeron did single out several outstanding performers.

Foremost among them was freshman tight end Arik Gilbert, who scored a pair of touchdowns in the passing game.

“He looked phenomenal,” Orgeron said, “on a couple of big-time plays.”

Gilbert, the reigning National Player of the Year and the highest-rated tight end in 247Sports’ history, has stood out all camp, lining up as both a tight end and a receiver.

Orgeron also name-dropped freshman wide receiver Kayshon Boutte, another five-star pass-catcher who has found his way into the rotation.

“We’re looking at Kayshon Boutte starting as a freshman,” Orgeron said. “I think that’s locked in. Racey McMath, Terrace Marshall has to be our go-to guy…and Arik Gilbert, those are the top four receivers we have right now.” Also in the mix for snaps at receiver – where Orgeron hopes to go six or eight deep – are senior Jontre Kirklin and freshman Koy Moore, who is “coming along very fast” despite a minor hamstring injury.

Defensively, Orgeron highlighted the pass rush as stellar, with four or five “sacks” of quarterback Myles Brennan and several pressures. (“Sacks” are called by Orgeron in the scrimmages, in which quarterbacks wear non-contact jerseys.) Other standouts included the linebacking corps and a deep group of safeties Orgeron is happy to have at the back of Bo Pelini‘s defense.

“(Todd Harris) is not full speed yet,” Orgeron said. “He’s not 100 percent healthy, but he’s getting close. We feel with Jacoby Stevens and the development of Maurice Hampton that we have three guys that are starters there, and we’re really excited about Jordan Toles, a young freshman. We have three great college safeties that we’re very pleased with.”

Though the defense pressured Brennan more than usual, Orgeron was pleased with the play of both his quarterback and his offensive line. The Tigers lose four starters from last year’s Joe Moore Award-winning crew, but they do return right tackle Austin Deculus, veteran guard Ed Ingram, and Harvard transfer center Liam Shanahan.

“I think the acquisition of Liam Shanahan really helped us out,” Orgeron said. “He’s given our offensive line confidence that he could do it. At left tackle Dare Rosenthal, I think that he’s going to have an excellent year. He’s a big time athlete…Obviously we want a championship with Austin, so we feel good about our front. We’ve got to be able to develop depth. Somebody’s got to step up. And more than likely there’ll be a young player, we need to get them ready.”

Orgeron also praised the play of his three running backs, all of whom – Chris Curry, Tyrion Davis-Price, and John Emery – are considered starters. After featuring Clyde Edwards-Helaire as a primary back most of last season, Orgeron can envision a running-back-by-committee approach that favors the hot hand in 2020.

“I can see, especially in the beginning of the year, using three backs, maybe four,” Orgeron said. “But if a back is hot and having a great game, we’re not going to take him out. I think the situation will dictate itself with who’s going to be playing to start off the game.”