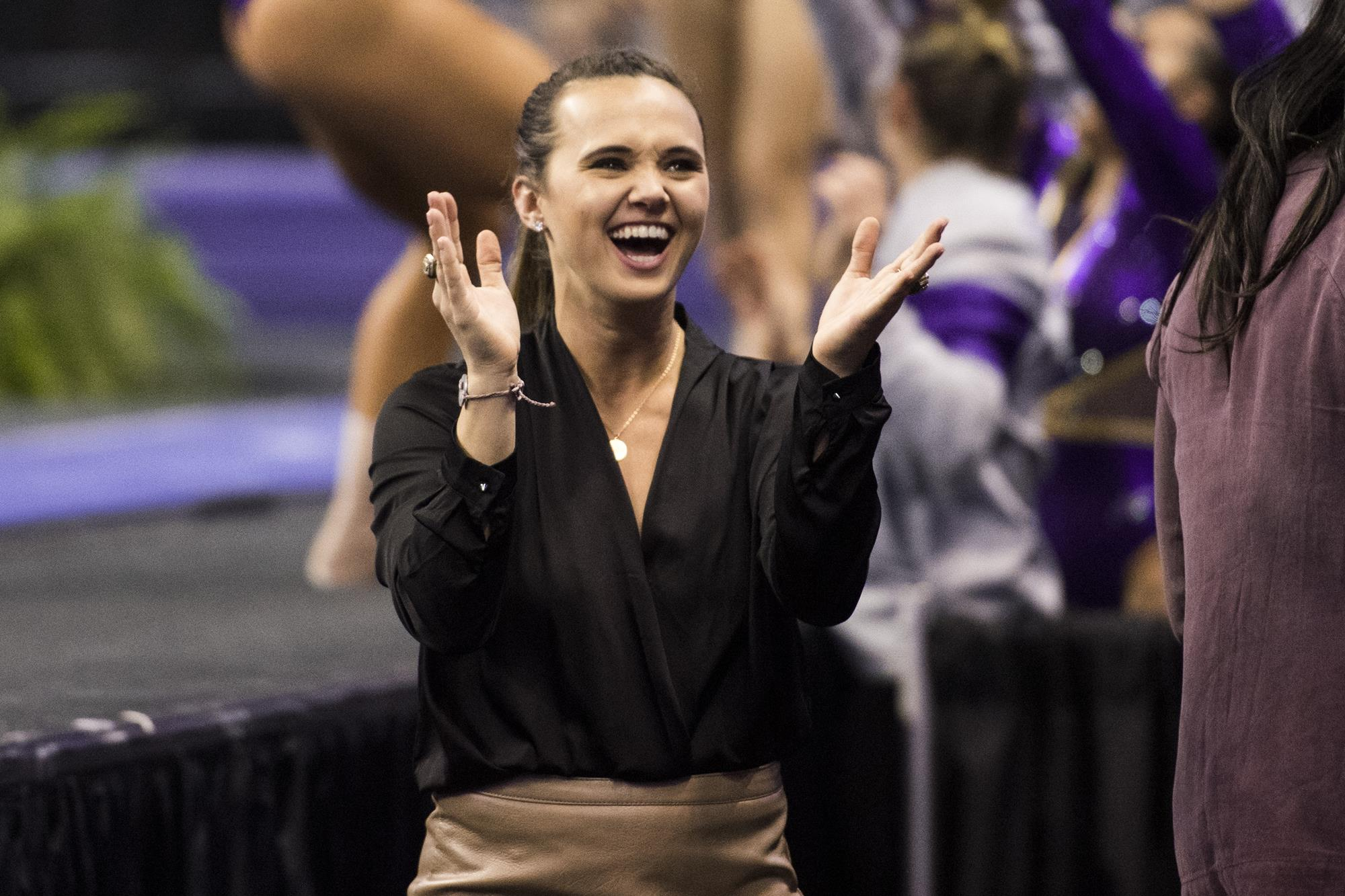 It would be imprecise to say Ashleigh Gnat is back at LSU. Yes, the former Tiger great has returned to campus as a full-time assistant coach for LSU Gymnastics. And yes, after 13 months away, Gnat once again resides in Baton Rouge.

But Bugs can’t be back, because Bugs never left. LSU was always with Gnat, and Gnat, with LSU. The two are forever linked.

Since her earliest years, Gnat has known only purple and gold. Her father Ray was an All-American at LSU in the early 1980s, while her mother Joan was an Olympian on the 1972 U.S. National Team. Ray and Joan later teamed up to start their own gymnastics academy in Orlando, Florida, and outgoing head coach D-D Breaux has vivid memories of Gnat as a three-year-old toddler, following her father around on the job.

Gnat quickly outpaced the footsteps she followed in. She finished her LSU career as a 17-time All-American and as one of the most decorated gymnasts in school history. The list of accomplishments are limitless, highlighted by the 2017 floor exercise national championship, four individual SEC titles, and a school-record nine perfect 10s. But even after an unparalleled four-year stint in Baton Rouge, she couldn’t find it in herself to leave. She remained at LSU for two seasons after completing her career, working on staff as a graduate assistant while she earned her master’s degree. It was then that coaching and mentoring became something Gnat fell in love with.

“When I was a senior [at LSU], I decided that coaching was definitely something that I wanted to do,” Gnat says. “When I got to college, being exposed to this team’s atmosphere and competing for this university meant a lot to me.”

For Gnat, grad school was the first step in the learning process. Just months removed from being a student-athlete, she admitted that she was in a different frame of mind, but she learned more developmentally about what it was like to work one-on-one with a gymnast, build a routine and give them the confidence needed to execute.

Then her first full-time coaching position became available. Gnat left for State College in July 2019 to become an assistant coach at Penn State, gaining valuable experience at another Division I program roughly 1,200 miles away.

“I only knew one program,” Gnat says. “I was very interested to see another conference and how everything worked at other places. I thought it was a great opportunity. I definitely didn’t envision coming back [to LSU] this soon. It’s every coach’s dream to coach at their alma mater.”

A Lake Mary, Florida native, Gnat still says returning to Baton Rouge feels like a homecoming of sorts. Above all, she realizes the job awaiting her cannot be taken lightly, and it’s one she promises to put everything she has into.

Gnat’s role on the staff is especially unique. Known as a model student-athlete throughout her career as a Tiger, she never complained and always did everything that was asked of her. She knows exactly what it takes to be an LSU gymnast, and her guidance will be invaluable to all 20 of the girls on the current roster.

“I think I’ll be able to contribute a lot of relatability to the girls,” Gnat says. “I’ve been in their position before and I think I understand what that’s like. Then, to prioritize them and make sure we’re putting them first in every decision that we make. It’s something that is so fresh in my mind of what it’s like to actually be them.”

Breaux, who announced her retirement in August, walks away from LSU as the longest tenured coach in the history of the SEC. Gnat’s goal is to honor her legacy by building upon her greatness.

“I think there was a part of her that was expecting [my return],” Gnat said of Breaux. “She played a big part in me growing as a coach, helping me along that path. She was obviously very excited. She did everything for us and she laid the foundation, so it’s going to be us building on top of the work that she already did.”

Co-head coach Jay Clark will take over for Breaux as the third head gymnastics coach in school history, and although he has big shoes to fill, Gnat has full confidence in Clark to carry the torch.

“I was able to be coached by Jay then work side-by-side with him,” she said. “He’s an incredible leader. I think he has great visions and plans for this team for where he wants to lead us.”

When asked about some of her fondest memories and performances at LSU, Gnat surprisingly didn’t seem to have any hesitation. The first came as a freshman in 2014 before the first sell-out inside the Pete Maravich Assembly Center. Breaux walked the team through the arena hours before the meet, pointed directly at the stands and told the team to “pick any seat you want and it will be filled by the time we get in here tonight.” She was right, and that was a moment Gnat will always remember.

The second came her senior year, when the Tigers won the school’s first SEC championship since 1981. Gnat says she can recollect every detail about that meet from beginning to end. It will always hold a special place in her heart, and seeing the program build off that title has been just as rewarding.

The last one came in her final routine of her career at the 2017 NCAA National Championship: a beam routine that, if you follow LSU Gymnastics closely, will go down as one of the greatest ever. She’s thankful for social media and the film that exists so she can always reminisce upon that moment.

We’ll never forget this beam routine from @Ashleigh_Gnat. Definition of All Heart. pic.twitter.com/lVql0p6hCl

While there is a changing of the guard at coach, the roster remains primed for another SEC title run. The return of veterans like Kiya Johnson, Sami Durante and Olivia Gunter provide stability at the top, alongside one of the best freshman classes in school history stepping on campus.

“I think what we have on the team right now is an entire package,” said Gnat. “The incoming talent speaks for itself. I think the fans are going to really fall in love with these freshmen. I think we’re going to watch the sophomores blossom and be major contributors.”

At this point, Gnat says, the coaches feel like they know this group of newcomers well, having formed the relationships in the club gymnastics arena over the years. She also thinks the leadership, specifically in this year’s senior class, is going to be important to success in 2021.

Whether competing as a gymnast or instructing as a coach, Gnat’s expectations don’t change for this program. She’s as grateful for the position as anyone, but it’s full speed ahead now.

“It’s a huge honor, it’s humbling and it’s too overwhelming to put into words how much it means to me to be back at LSU,” Gnat said. “I’m really looking forward to getting going, and putting us on track for a national championship.”