Jabril Cox Has Something to Prove 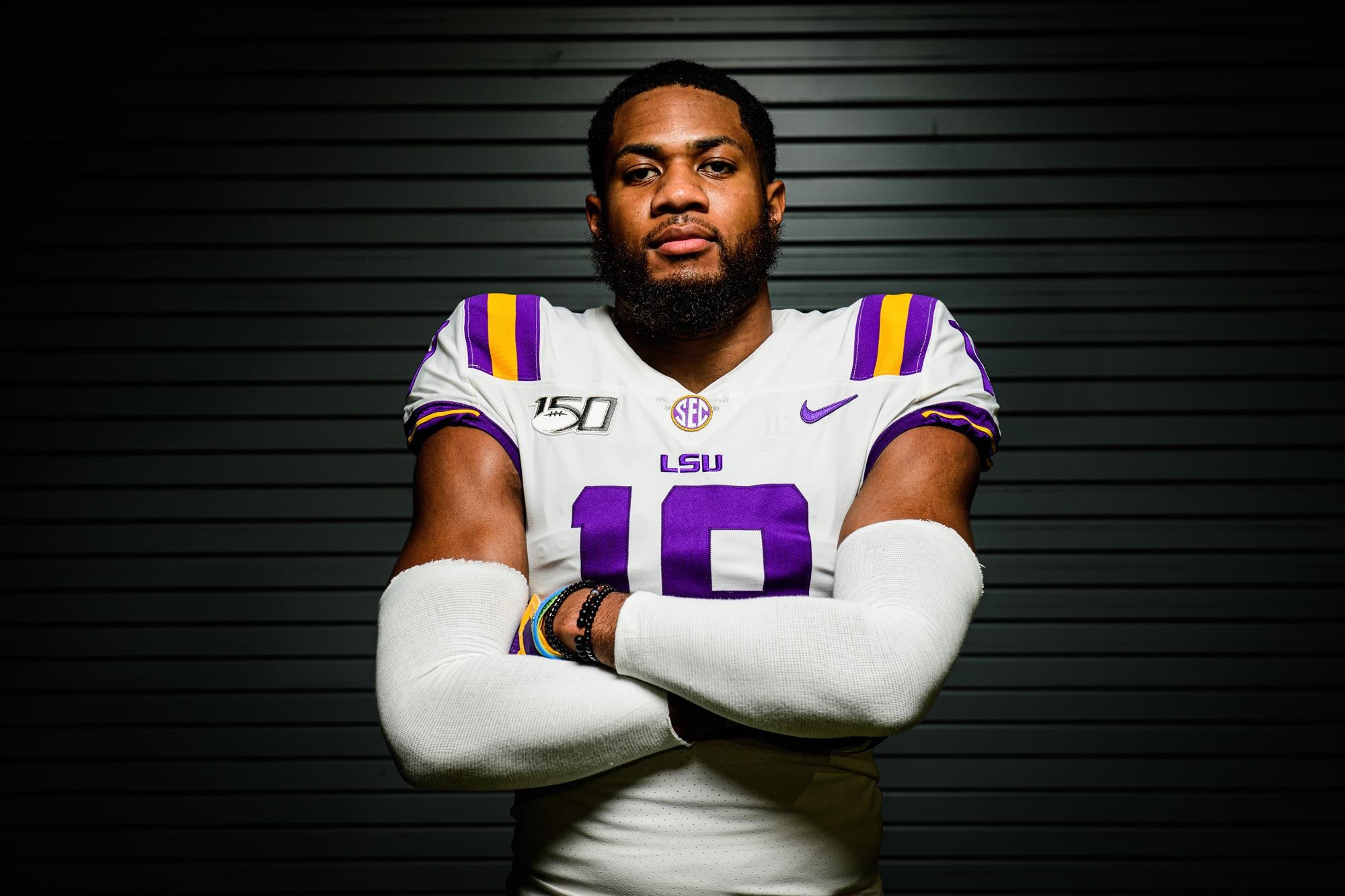 It can’t be more than a few minutes since LSU’s football practice has ended, but because he has no time to waste, and because he has everything to prove, Jabril Cox is waiting for film.

Other players disperse slowly from the field. They talk – to each other, to their coaches, to their trainers. They wind down. They begin to make their way home.

Not Cox. After three hours of practice and three years of elite play at linebacker for North Dakota State, he’s not here to talk. He’s here to tackle. He did not, after three national championships, two All-American seasons, and a proven NFL resume assembled in the FCS, transfer to LSU for the conversation. He came for the competition.

So he grabs a couple teammates, and when the film is ready, he practically devours it. And if the practice film he consumes obsessively is any indication of the season he’s set to have, there’s plenty to be excited about.

“When we left the field a couple of days ago, I thought he was the best player on the field,” head coach Ed Orgeron says. “The guy’s made some plays.”

It’s what Cox does best, and it’s why he’s in Baton Rouge for one final collegiate season. Had he departed for the NFL Draft, he’d probably have been a mid-round selection, and he’d currently be securing a roster spot on one of 32 franchises in preparation for his rookie season.

Instead, even after three FCS Championships and countless plays made for the Bison, Cox felt the need to prove himself in the SEC before taking on the NFL.

“I’m truly excited for it,” Cox says of his lone and looming season of SEC football. “I know there’s a lot of people that say, ‘He did at the FCS level. Maybe he can’t do it at the FBS.’ But just being able to prove myself is something I’ve had to deal with all my life. So it’s nothing new, and I’m just ready to show everybody what I can do.”

For the ones that can’t.. pic.twitter.com/l0I6tKb9bA

COX IS USED TO proving himself. A multi-sport star at Raytown South High School in Kansas City, Missouri, Cox starred as a sophomore, drawing attention from nearby Power 5s, but injured his knee as a junior. That turned college scouts sour on his prospects, and despite accounting for 3,107 yards of total offense and 31 touchdowns as a quarterback his senior season, he finished his prep career as a two-star prospect ranked 3,246th in the Class of 2016.

“Once they passed on me, I just figured that I’m going to NDSU, one of the best in FCS, just to prove myself there and just continue to ball there,” he says.

He redshirted his first season and broke out in his second, taking quickly to his new position on the other side of the ball. The athleticism that made him an elite prep quarterback and the size that NDSU’s staff saw as ideal for defense combined to make him an instant sensation. He earned Missouri Valley Football Conference Freshman of the Year and Newcomer of the Year honors, led the Bison in tackles (75) and tackles for loss (13.0), and led them to the 2017 FCS National Championship.

“It was pretty big transition,” Cox says of life in Fargo. “Especially the winters there. They can be kind of brutal.”

“In the negatives, and that was the high,” he laughs. “But you learn how to live there and actually Fargo is a very good, nice town.”

Especially when you win three national titles, pick up two All-American honors, and leave a decorated program as one of its best ever players.

“Just having that chip on my shoulder just made me just want to just be the best that I can,” Cox says.

I just want to compete as a whole,” he says. “I know good isn’t good enough. So I’m always trying to better myself. If I get maybe 10 tackles one game I want to exceed that, get 12 or 13 the next. I’m always competing against myself. Because if you look at other people and their accomplishments, you’re gonna look down on yourself. So I like to just internally just set goals for myself and just try to beat those every single day.

The rings didn’t make the chip go away. With a season of eligibility left, Cox picked the transfer portal over the NFL Draft. He wanted to finish school and get a degree, but he had flashbacks to high school once again. He was getting overlooked, and he had to prove the overlookers wrong again.

“When you’re at FCS, it’s always the competition,” he says. “It doesn’t matter how good you are. They’re always gonna talk about competition. So just being able to go into FBS and then just show what I can do was also a factor that played into entering the portal.”

Linebacker Jabril Cox goes Inside the Huddle with @emilyvdixon

WHEN LSU CAME CALLING with interest in Cox, two things stood out. The first was the pedigree of defensive players – particularly linebackers – the Tigers have put out. “I know LSU is known for their defense and defensive players,” Cox says. “They’re the ones that are usually well known in the NFL, LSU. Seeing Patrick Queen last year go in the first round – from not even being heard of to go into the first round – that’s something that really caught my eye and having me choose LSU.”

The other determining factor was how much LSU reminded him of NDSU. Opposite climates, but compatible cultures. Championship programs – perfect places for Cox to prove himself. He’s eager to play for Tiger fans, and he feels he can play a role like Queen did in 2019, roaming sideline to sideline and into opponents’ backfields to make plays with his speed and power.

“I bring a lot of finesse at linebacker,” he says. “Playing in the open field, playing in space is something that I love and enjoy. I have the speed to cover tight ends, running backs, slot. I just feel like I’m the all round player that can play on the line and outside the box.”

What Orgeron likes best about Cox is his maturity. He brings a focus to the linebacker room that meshes well with the likes of Damone Clark and Micah Baskerville, all of whom will need to emerge to replace departing starters Queen and Jacob Phillips.

“First of all, he came up with a great attitude,” Orgeron says. “I haven’t heard him say a word. ‘Hey, Coach’ – Maybe, if I say hello to him. But he’s focused, razor sharp, is always studying, very smart. He knows the defense. He’s very fast. He’s about 6-3, 225, 230 pounds. He can run, he can key and diagnose. Obviously he has a lot of experience of playing the position. He’s a physical tackler, he can shed blocks well, can rush the passer well, drops into coverage well. He’s a complete linebacker.”

“He’s a hard worker,” senior safety JaCoby Stevens adds. “He loves football. Me, Jabril, and Damone, we all go watch film, like, right after practice. I mean, we’re almost waiting for the film to be put up. So he’s a football head. He reads, he can run sideline to sideline. He’s a good guy. I’m really excited to play with him.”

Cox’s goals aren’t explicit. He’d like another national championship. He’d like to set himself up for the NFL. But he doesn’t think in those terms. He thinks about incremental improvement. Today, all Cox wants to do is be better than he was yesterday.

“I just want to compete as a whole,” he says. “I know good isn’t good enough. So I’m always trying to better myself. If I get maybe 10 tackles one game I want to exceed that, get 12 or 13 the next. I’m always competing against myself. Because if you look at other people and their accomplishments, you’re gonna look down on yourself. So I like to just internally just set goals for myself and just try to beat those every single day.

That’s why he’s inhaling film. That’s why he’s flying around the field. That’s why quietly making a case for himself as one of the best players in purple and gold. After all his production, after all the winning, he still has something to prove – to the world, and to himself. “I think this guy is gonna have an excellent year at LSU,” Orgeron says. “He definitely is an SEC linebacker. Obviously, he was overlooked in recruiting, but here’s his shot.”