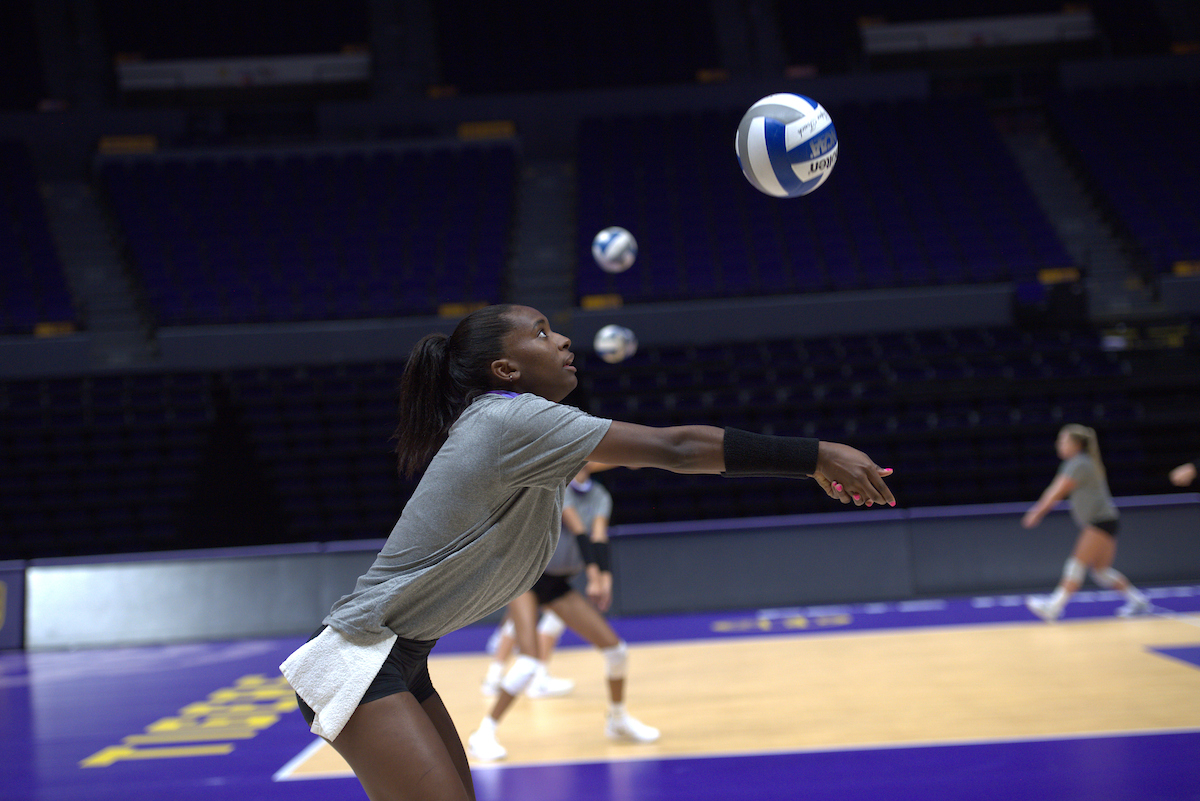 BATON ROUGE – The LSU Volleyball team began practice in preparation for the upcoming season on Friday morning on the main floor of the PMAC with 11 returners and four newcomers.

The Tigers bring a majority of both their offensive and defensive production back from last year’s team, including 96.3-percent of assists, 91.4-percent of digs, 88.1-percent of kills and 83.3-percent of blocks. On top of that, LSU has the PrepVolleyball.com No. 22 recruiting class of four freshmen that will all have the opportunity to elevate the skills and culture around this program.

“We are going to be a good volleyball team” said head coach Fran Flory who is entering her 23rd season leading the LSU Volleyball program. “We know how to play the game. They haven’t played in a long time, but they were already in a good rhythm. I’m excited to see how far we can get them in preseason. Not knowing where we’re playing to start, how far we’re going, is a little bit of a challenge. We’re going to take it one step at a time, one day at a time and progress.”

“They came in disciplined,” Flory went on to say. “Raigen Cianciulli – this is the most disciplined practice she has had in her entire career. The maturity is a huge point of emphasis. I’m super proud of them. They led. They didn’t stand and wait. They have a personality already. They kept telling me they were tight during the summer – they are tight. This is a really tight group and they are going to feed off each other and have a great year.”

The schedule is yet to be officially announced as the SEC and NCAA work on its development.

The Task Force’s initial requirements for fall SEC sports include testing requirements, procedures for infections and contact tracing, and protocols for quarantine and isolation.  Similar requirements will be developed for other SEC sports before their competition seasons begin.

“This a historic opportunity,” Flory explained. “We are going to be the first indoor sport in collegiate athletics to play. We can carry that torch and be responsible and do it really well. This team understands that and the responsibility that comes with it. We’re going to do a great job with it.”

After going 15-13 a year ago, LSU is looking to make a jump this season and will have the opportunity to do so with a lot of talent returning and coming in. The team leaders in kills, blocks, digs, sets and service aces all return from last year’s squad.

Taylor Bannister returns for her senior season as a force, earning All-SEC honors and various All-American Honorable Mention honors in each of the past three seasons. She has led the Tigers in each of the past three seasons in total kills, tallying 1,255 (12th most in program history) throughout her career. Her 3.84 kills per set currently ranks as the second best in program history. The Missouri City, Texas native also led LSU last year with 21 service aces. Bannister scored the third most points in the SEC a year ago.

Senior Raigen Cianciulli returns as the top defensive player on the team, serving as the Tigers’ libero in each of the past three seasons. Since her freshman year, Cianciulli has led LSU in digs every season and currently sits in the No. 3 spot on LSU’s all-time digs list with 1,486. Averaging 495.33 digs per season throughout her career, that same production this year would earn Cianciulli the top spot on LSU’s all-time digs list as she currently sits 107 behind Haley Smith, who recorded 1,593 in her career which spanned from 2012-15. With 4.36 digs per set last year, Cianciulli averaged the third most in the SEC.

Junior Whitney Foreman has had great presence at the net in her first two season as a Tiger, leading LSU in blocks both of the past two seasons. In those years, Foreman has accumulated a total of 190 blocks.

With a year of experience under her belt, Karli Rose will look to build upon her freshman season which saw her earn spots on the SEC All-Freshman team and AVCA South All-Region Honorable Mention team. A dynamic and explosive setter, Rose recorded 962 assists a year ago on her way to totaling a team-high seven double-doubles. In Week 5 last year, Rose was named SEC Freshman of the Week and in Week 7 was named SEC Setter of the Week.

Samarah Hill earned a spot on the SEC All-Freshmen team last year after she averaged 2.92 kills per set, totaling 262 kills. Another standout freshman from a year ago, Anita Anwusi average 1.12 blocks per set for the fourth highest in the SEC.