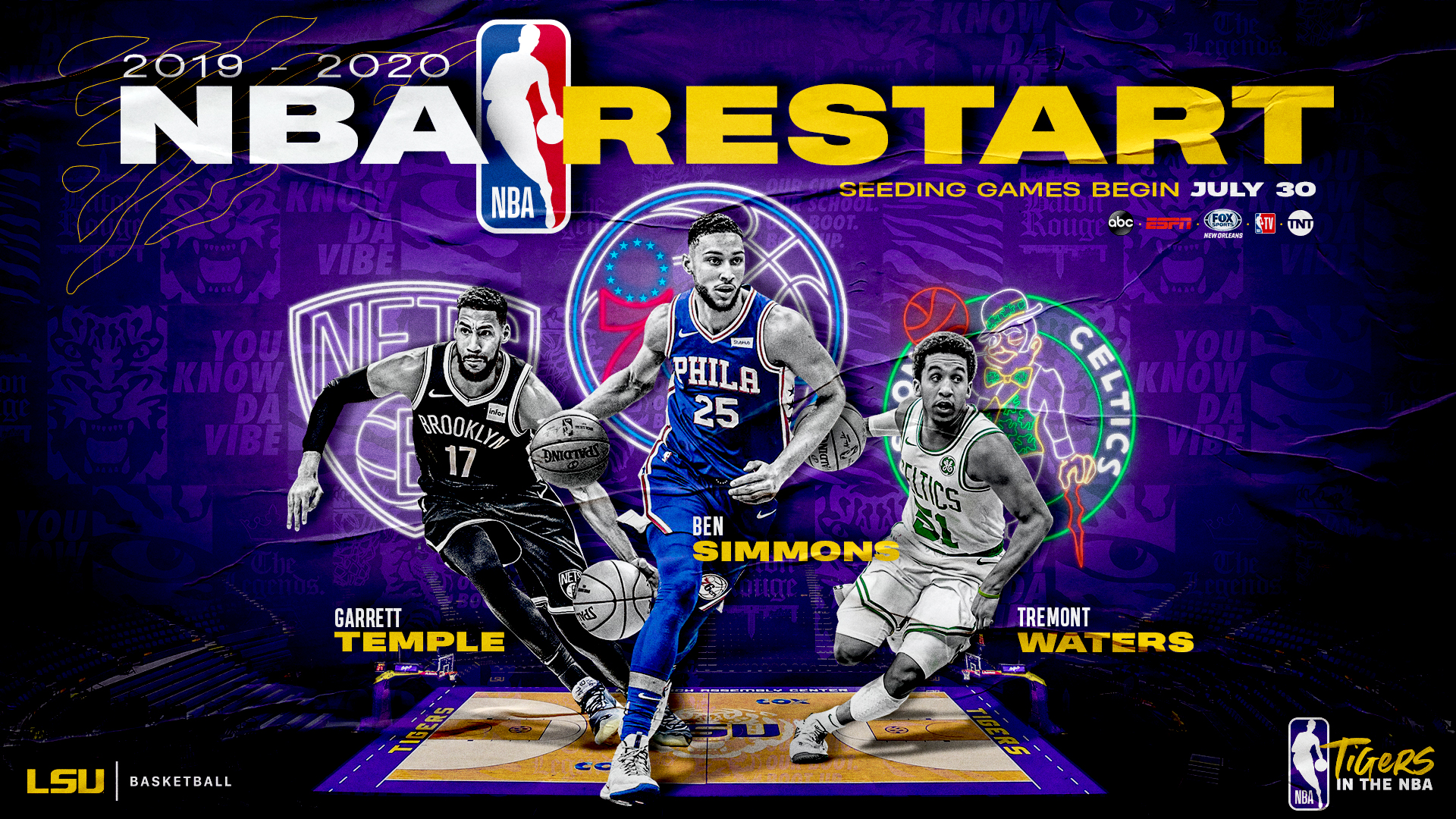 BATON ROUGE – Three former LSU Basketball stars will take part in the seeding games and possibly beyond as the unique NBA Restart begins Thursday at the ESPN Wide World of Sports Complex at Walt Disney World in Orlando, Florida.

Garrett Temple of the Brooklyn Nets, Ben Simmons of the Philadelphia 76ers and Tremont Waters of the Boston Celtics have all been in Orlando in the NBA “bubble” for several weeks in preparation for the restart of the NBA season. There will be eight seeding games for each team that could affect the standings heading into what will be the NBA playoffs which could begin with a play-in for the eighth position in each conference.

Boston in third and Philadelphia in sixth have already clinched playoff spots and would mainly be playing for East seeding in the NBA playoffs. Brooklyn is presently in seventh position at the moment, but will still need some wins to avoid possibly being in the eighth-seed play-in.

All three teams were 1-2 in the three exhibition games played in Orlando.

The league begins with two games on Thursday before Temple’s Nets face the Orlando Magic in their first game at the HP Field House at 1:30 p.m. on Friday. There is no national television for that game. Waters’ Celtics will take on Milwaukee at the Field House at 5:30 p.m. in a game to be nationally televised on ESPN Friday.

The 76ers and Simmons, who played at power forward during some of the exhibition games, will face Indiana at 6 p.m. at the VISA Athletic Center in a regionally-televised contest on Saturday.

In the three exhibition games, Temple played a total of 71 minutes, making 9-of-28 field goals, including five treys. He scored a combined 25 points with 12 rebounds and six assists.

Waters, who was the Rookie of the Year in the G-League, and is a two-way player for the Celtics, played 49 minutes in the three prep games. He was 6-of-21 from the field with three treys, scoring 19 points, seven rebounds and 12 assists.

Simmons played a total of 69 minutes for the 76ers in the exhibitions as he looks to play a counting NBA game since suffering an injury in late February.  Simmons was 11-of-29 from the field, scoring 27 points with 27 rebounds and 20 assists.