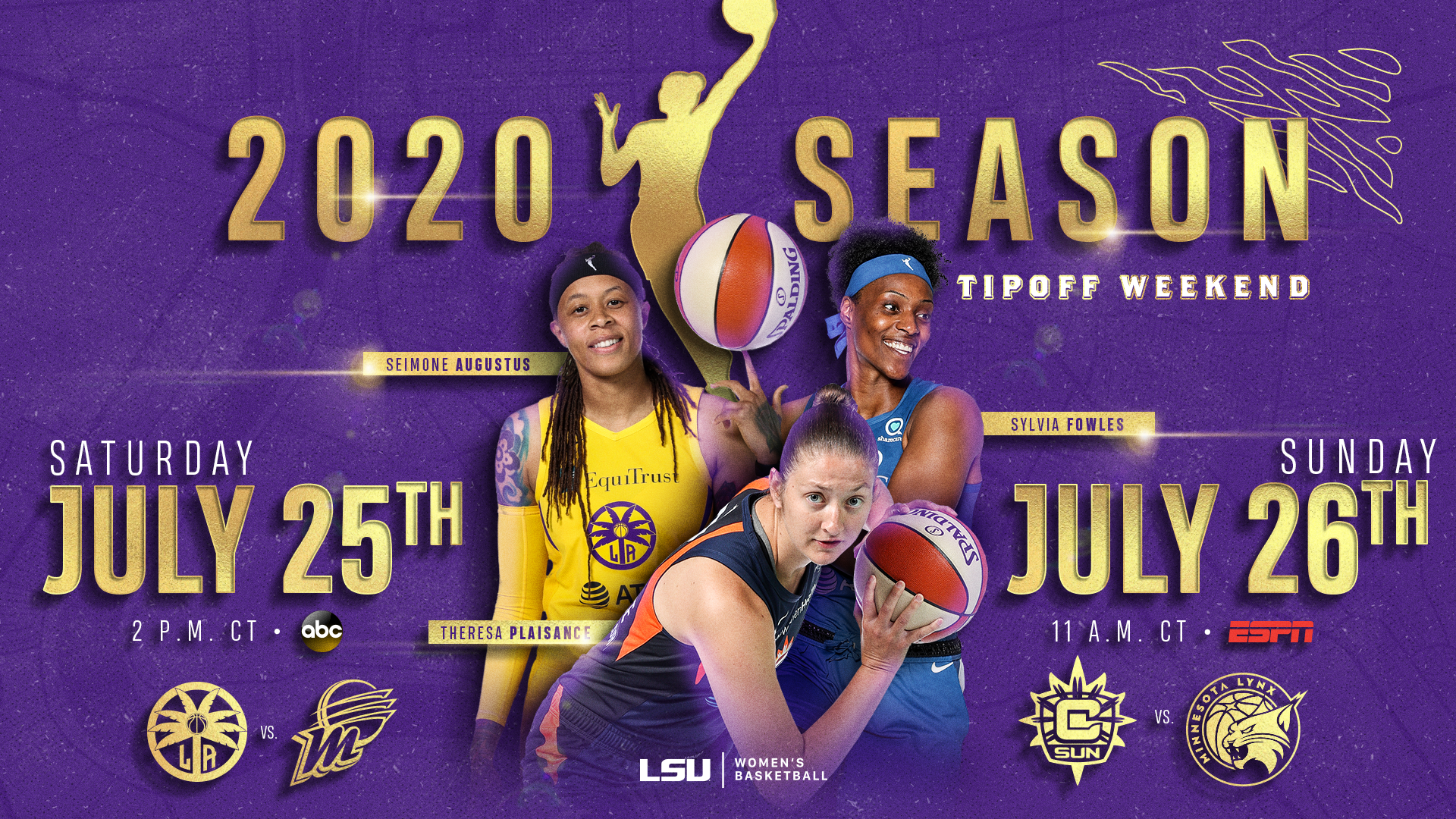 BATON ROUGE, La. – LSU women’s basketball alumnae Seimone Augustus, Sylvia Fowles and Theresa Plaisance continue their professional careers in the WNBA as the 2020 season tips off this weekend at the IMG Academy in Bradenton, Florida.

Augustus is going into her 15th season in the league, but her first season with the Los Angeles Sparks. The four-time WNBA champion traded in her blue and silver Minnesota Lynx uniform after 14 seasons for the purple and gold of the Sparks in February 2020. Augustus is an eight-time All-Star, six-time All-WNBA honoree and a three-time Olympic Gold Medalist with USA Basketball. She currently ranks 11th on the WNBA all-time scoring list with 5,881 points, averaging 15.9 points per game throughout her career on an efficient 48 percent field goal percentage. She also shoots 85.9 percent from the free throw line over her WNBA career.

The Sparks will start the season on Opening Day, Saturday, July 25, with a 2 p.m. CT game on ABC against the Phoenix Mercury.

Fowles, going into her 13th season and sixth with the Minnesota Lynx, ranks second on the WNBA’s all-time rebounding list with 3,332 rebounds. She needs 25 boards to become the league’s career leader, passing Rebekkah Brunson’s 3,356. The two-time WNBA champion also leads the league in career field goal percentage at 59.3 percent. Fowles spent the offseason at home for the first time in over a decade to train with the USA Basketball’s Women’s National Team after years of playing overseas.

Plaisance is entering her seventh season in the league. The 2014 draft pick was traded to the Connecticut Sun in August 2019 after five-plus seasons with the Tulsa Shock/Dallas Wings organization. 2019 was her first season back on the court after battling a knee injury that prematurely ended her 2018 season. Plaisance spent this past offseason playing in China for Shaanxi. A few days after being hospitalized for a virus in December 2019, Plaisance recorded an amazing 51 points-31 rebounds game against Tianjin on December 19. Nine days later, she scored 65 points, including 19 of 24 free throws against Wuhan.

Fowles and Plaisance will battle for LSU bragging rights on Sunday when the Connecticut Sun take on the Minnesota Lynx at 11 a.m. CT on Sunday, July 26 on ESPN. Opening weekend is dedicated to the Black Lives Matter movement. The 2020 WNBA season is dedicated to social justice through its new platform The Justice Movement.

All games will available through the WNBA League Pass with the full schedule available at WNBA.com.