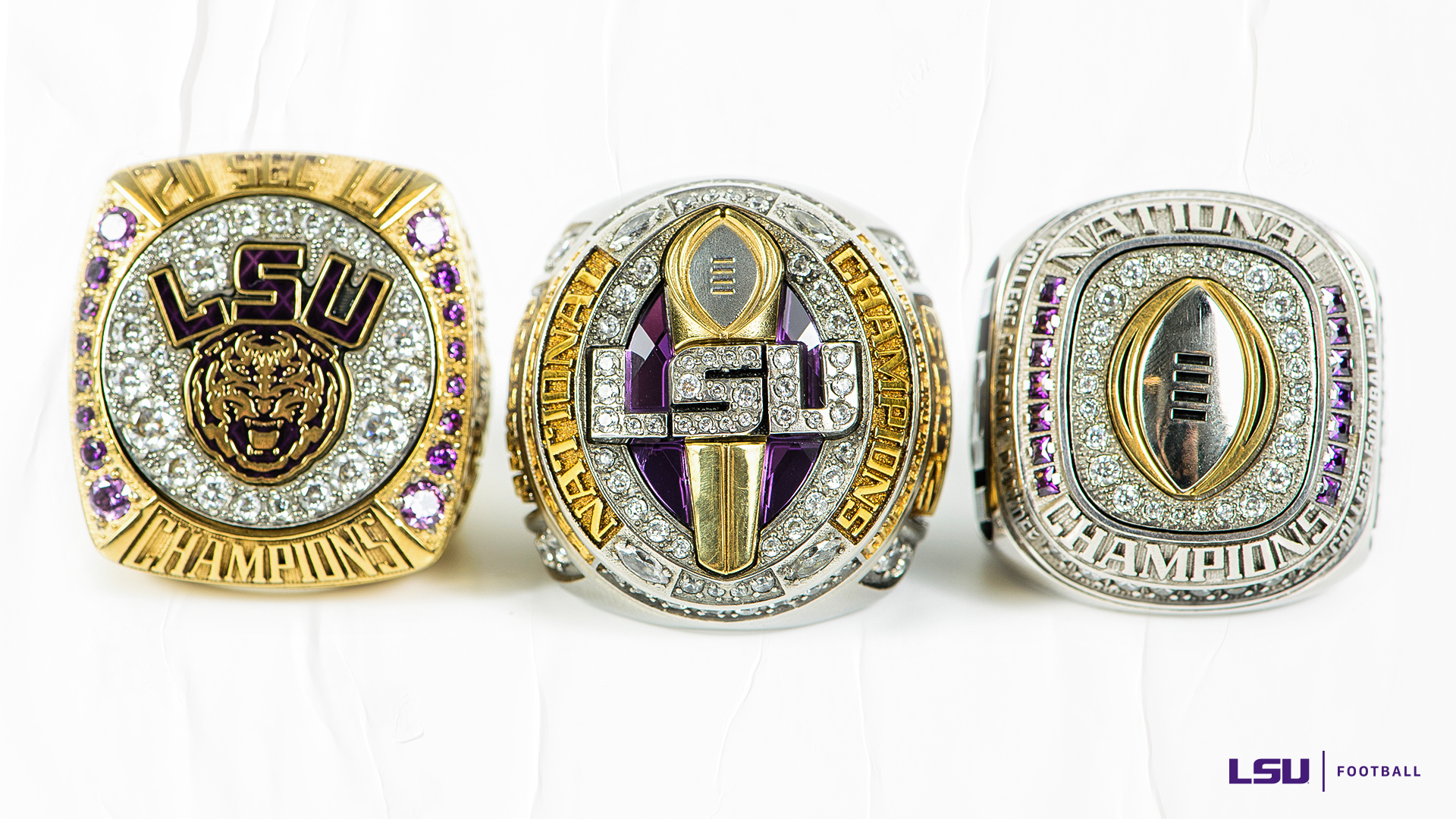 After he threw his 60th touchdown of the season and put LSU’s 2019 CFP National Championship victory on ice, Joe Burrow demonstratively pointed to his ring finger as he walked off of the field and into immortality.

“It’s time to fit me for that ring.” ??#NationalChampionship pic.twitter.com/n0b7L737pB

The message was clear as a flawless diamond. Despite the 12 minutes left on the clock, Burrow was confident enough in LSU’s 42-25 lead to start thinking about his hard-earned hardware. He even knew the size already: 10.5.

“We already got fitted for them,” Burrow said after the game.

In truth, Burrow wasn’t the only one thinking about jewelry before the final whistle on January 13. A ring is built to last forever, its circular design symbolic of the eternal bond it represents. And when the time frame is perpetual, the design requires foresight.

We’re not just talking weeks or months here, either. LSU has been thinking about this ring since Coach O took the job.

“The last couple of years, we’ve been thinking about this,” says Derek Ponamsky, special assistant to head coach Ed Orgeron. “The last thing you want to do is not be prepared for something.”

Three Rings to Rule Them All

While the Tigers were putting the finishing touches on their gem of a season in November, December, and January, Ponamsky, assistant athletics director for equipment Greg Stringfellow, and director of equipment Louis Bourgeois were gathering input and guiding the design of three different rings LSU would eventually earn. By the time Burrow and his teammates left the field as the undisputed national champions in January, they’d earned all three: an SEC Championship ring, a College Football Playoff champions ring provided by the CFP, and an LSU-provided national championship ring.

Designing three rings presents diametrically opposed opportunities and challenges. On one hand, three rings allows more space than one or two, providing a larger canvass for all of the desired elements. “It affords you the luxury of instead of having to force everything into one ring, you can play off of the other two,” Ponamsky says. On the other hand, it’s critical to differentiate each ring from the other, so that it tells its own story while connecting to – but not overlapping with – its bejeweled companions.  “When you are successful enough to do all three, doing three rings is difficult, because you don’t want to be repetitive on every single ring,” Stringfellow says. “You don’t want to show this quote or this saying or this logo every single time. You’ve got to try to be unique ring to ring, to make them have their own special meaning.”

Orgeron led the Tigers to the championship, in part, through his masterful delegation of duties, trusting his coordinators and assistants to play to their strengths while he played to his. The design of the three rings was no different. As LSU pulled closer and closer to an SEC title, Orgeron trusted Ponamsky, Stringfellow, and Bourgeois to focus on potential rings while he focused on winning them. Their task was to consult with a group of four players – Joe Burrow, Clyde Edwards-Helaire, Lloyd Cushenberry III, and Rashard Lawrence – and narrow down some specific elements to bring back to Orgeron at the right time. “We wanted to make sure that we included his thoughts,” Ponamsky says, “which all along were, ‘I want a badass ring.'”

From there, the group focused on a philosophy that guides almost everything the program does from a branding perspective. “On the wall in my office I have a sign that says, ‘LSU: Let’s Stay Unique,'” Ponamsky says. “We want to make sure that we do something that stands alone, because we are different than everybody else.”

The SEC Championship ring was the first LSU won, and it features several distinctive features. First and most obviously is the color, a characteristic as unique to LSU as any other. Yellow gold and sixteen purple stones adorn the face for LSU’s 16 conference championships, and the scores of all eight conference wins in 2019 line the interior of the ring. One side features the score of the championship game in Atlanta and the text “Geaux Tigers.” The other features the owner’s name and position with another signature phrase: “One Team. One Heartbeat.” These “aren’t just slogans on the wall,” Ponamsky says, but missives Orgeron repeats constantly, mantras that guide the teams. They’re words that, like the ring that bears them, are “all about LSU,” Stringfellow says.

The CFP ring usually comes standard, but LSU, in fitting fashion, added its own distinct touch. The CFP ball logo is gold, and it sits atop each ring won every year by the season’s champion. “It was just going to be silver (around the ball), and we kind of just threw it out there: It’d be cool if we had purple stones in there,” Stringfellow says. “Nobody’s ever asked that before.” Jostens, the creator of the rings, agreed, the first time they’ve changed the top of the ring for a CFP winner. “If you ask for permission, sometimes you get it,” Ponamsky laughs. “Begging for forgiveness doesn’t get you the results that you want.”

The crown jewel of the group is the LSU-issued national championship ring. An unprecedented season deserves an unprecedented ring, and that’s exactly what the Tigers designed. Stringfellow was around for both the 2003 and 2007 design processes, which were modeled after the New England Patriots title-winning tokens. “The rings we ended up with this time look like no ring that’s ever been done,” he says. “The national championship ring is the first time they’ve done a ring that shape and size in their history.”

The top of the ring is stunning, featuring white-gold LSU stones on top of a yellow-gold rendering of the national championship trophy. Combined with the purple stones behind the trophy, it showcases all three official school colors: purple, gold, and white, a very intentional design element. “They’re our school colors,” Bourgeois says, “so let’s make it fit.”

Four stones for the four national championship programs in modern history line the edges of the top. The ring is modern in design but inspired by LSU’s tradition, drawing on design elements from not just 2003 and 2007, but also 1958. “There are other people who have walked this road before you,” Ponamsky says, “and you want to make sure that you show some deferential kind of respect to them.”

Like the 1958 ring, one side features a rendering of Tiger Stadium. “When you design the ring, you want to represent obviously the team that just won, the 2019 team, but you want it to be a history of the whole program as well,” Bourgeois says. “You want those guys from the 70s and the 60s to still be proud of what you’re doing today. So elements like Tiger Stadium will relate across the board.” The stadium is also a nod to the fans who helped drive the 2019 team to glory. “There were 102,000 people that came out to those games to support that,” Ponamsky says. “So to have Tiger Stadium on there isn’t just because it’s a pretty facade. That’s the symbol for the people that are in the stadium, that supported these guys every single time they took the field.”

Perhaps the most poignant feature is inside of the ring, where the text “LSU standard of performance” is engraved. It’s a phrase Orgeron adopted in the spring of 2019, and it’s one that embodies the team as well as any other. That it’s on the inside is not by accident, either. “It was paramount to put that on the inside, because that’s an internal thing,” Ponamsky says. “The standard performance is something that we control inside this building. That’s not something that everyone on the streets sees every single day. There’s a competition amongst everyone on this team, everything that we do, and that’s an internal thing. So for us to be able to put that on the inside and signify with that internal motivation and that internal drive, there’s symbolism in having that on the inside of the ring.”

History in the Making

One of the coolest moments of the process came during the photo shoot of the rings. Usually, Stringfellow uses the ring of Warren Rabb, the quarterback of the 1958 champions who now works for Jostens, for photos or for research. This year, however, he asked and received permission from the Cannon family to use Billy Cannon’s 1958 ring. “To be the only time we have the Heisman Trophy winner from two different teams rings together, I thought it would be historical,” Stringfellow says. “We needed a ’58 ring anyway for the pictures, and I just thought that Billy’s ring would be the cool one to have, so that we could shoot it next to Joe’s.”

Cannon’s ring was well-worn; Burrow’s, never. They tell two different stories with similar endings, but both are timeless, symbols of glory that never fades. All that’s left to do now is to add to the collection. Another title makes five – a handful of history. Whenever that next one comes, it will need to tell its own story. And whatever that story is, there’s no way it will be like the 2019 team, who earned their rings for the ages with a season of the same accord.

“We’d love to be designing rings after the 2020, 2021, 2022 seasons – every year, we want to design a ring,” Ponamsky says. “But we had to make sure this ring was something that captured that moment, that captured that team, that symbolizes what they accomplished.”

This ring bonds us for a lifetime.
Forever LSU! pic.twitter.com/OnDGO8CLUZ

Everytime I come around yo city
Bling Bling pic.twitter.com/ECiZTaMGAj